Dining at China Red requires plenty of patience, as we found out at our first visit to the newest addition to the Hu Tong empire. This is probably the major take away I gained from this arduous but delicious meal.

It is situated inside a busy Chinatown arcade where the old Village Cinemas used to be and the arcade now houses many young and hip Asian fashion/accessories stores. The restaurant showcases its dumpling making skills to passersby with a glassed-off kitchen outside, something that can often be seen at dumpling joints across China and which seems to be creeping into fashion here. 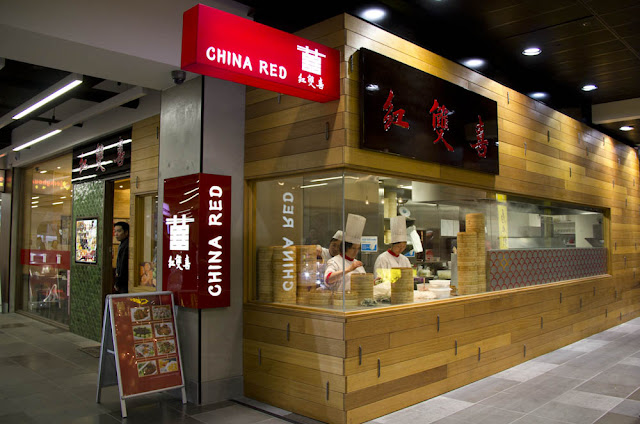 The talk of the town gimmick technology – the touch screen menu – lines every table, along with festive red and black decorations that mimic traditional Chinese weddings (this is where the restaurant name was derived). There is no mistaking the type of food served here. In my opinion though, the gimmick only adds to the confusion (possibly due to insufficient staff knowledge) as orders are somehow easily mixed up. I also find that because the staff relies excessively on the existence of these self serve systems, they often lack attention when actually called upon by the customers.

One thing I really wanted to complain about is their toilet. Although newly furnished and quite clean, there was only one single toilet in the basement level where we were seated. That is to say, one toilet shared between male and female patrons – just one. Enough said. It was only 7:30pm and the toilet has already run out of handwash and almost out of toilet paper. Oh dear.

Putting the service and toilet aside, the food on the other hand was actually quite nice (I didn’t have high expectations after reading other blog posts). We ordered the recommended Won Ton in Spicy Sauce ($8.80) for 8 normal sized wontons in a healthy serving of chilli and oil. It was so nice that we were able to eat seconds. For extra kick, add a spoonful of their special chilli sauce (next to the vinegar), it is full of szhechuan peppery goodness that numbs your tastebuds. The Sliced Pork with Garlic ($11.80) was also delicious, although it looked nothing like the picture. It also tastes quite different to the traditional way of making it – ie. without the heavy brown sauce. However, it was still very tasty and garlic enough for my liking. I loved how the peanuts gave it that crunchy texture which the traditional dish lacked. Next we ordered the Crispy Chicken with Garlic and Ginger ($17.80), although this was a bit on the dry side for me, T enjoyed it and I did think it was flavourful. It was also bigger than I expected and it took us a bit of effort to finish. The Xiao Long Bao ($10.80) was average in my opinion, I’ve definitely had better, but this is not to say it wasn’t good. They had plenty of tasty broth inside and the skin was about the right thickness – not too thick to make it dry and tasteless and not too thin to make it easily broken. The last dish of the day was the salt and pepper prawns (I think that’s what it was anyway since I couldn’t find it on their online menu). Again, full of flavour and I loved the crunchy garlic and pepper bits that I ate a few mouthfuls of it by itself. Yuye and I ordered a mango cubes and mango jelly in mango juice drink (phew that was a mouthful), the price on their website is incorrect (it says $4.50 but in actual fact it was close to $7). I wouldn’t call this a drink since it was basically ‘drinking’ jelly. The jelly at the bottom was large and round which looked like it was cut directly from a can into the glass. It was also a bit on the expensive side which in my opinion wasn’t worth it. We had to call the waiter about 5 times before they brought out my friend’s watermelon drink, and only after we said we wanted to cancel it. Mind you, the touch screen specifically says no cancellations after orders are placed so you need to be careful when you’re ordering.

Although the meal was very nice, the bad service and in my opinion lack of a proper toilet pushed it onto my dislike list. Unless if they can polish up their service skills, I will not be returning. With that said, for those of you wanting to try it out, the food is still worth going for and with time, maybe the service will get better as well.