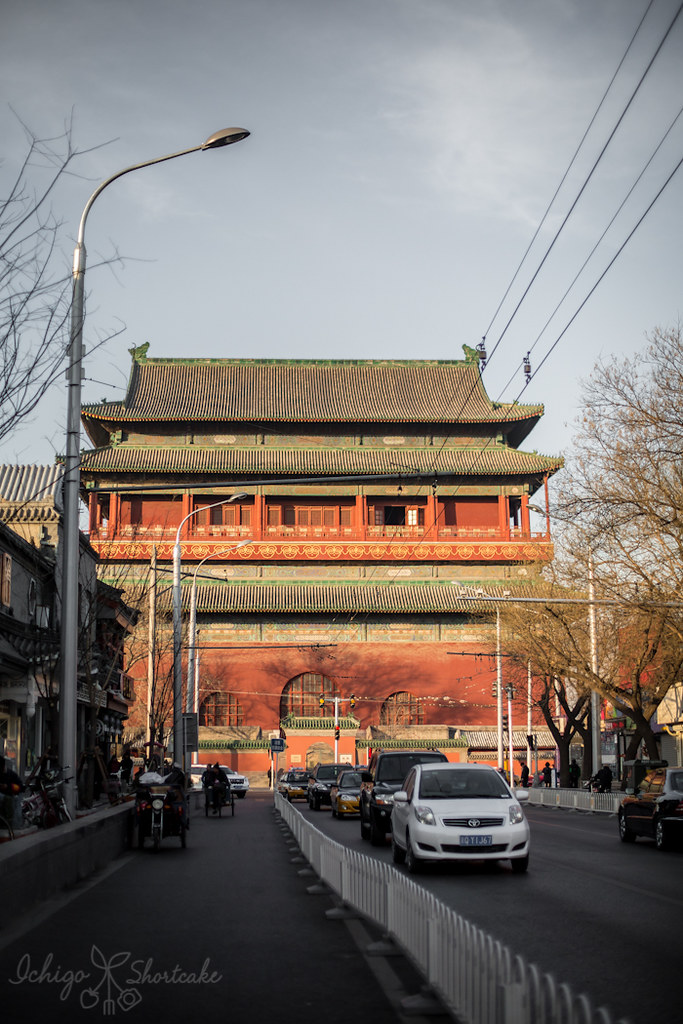 Continuing where I left off last time here, my 2015 Beijing trip was full of great food, although it was a bit too short.

After snacking on some traditional nibbles at Yan Dai Xie Jie (烟袋斜街) and purchasing (or just gawking at) all the cute and pretty handmade items in the local souvenir shops, you will arrive at the end of the street if you were heading towards the east. When you reach the end of the street and look up to your left, you will undoubtedly see the Clock and Drum Towers (钟鼓楼). These historical architectures form part of the rich history of China and also providing a great sightseeing destination if you were already in the area.

Dating back to the Han Dynasty (about 206BC) the clock and drum towers were used to tell time. A morning chime and a dusk drum roll were sounded throughout the city which formed a daily ritual for the residents. There are such towers throughout the country but the ones in Beijing are the tallest and largest and were first built in 1272. After many fires over the years, the towers were rebuilt a few times and renovated many times as well. The current towers were first re-built in 1745 and later renovated. 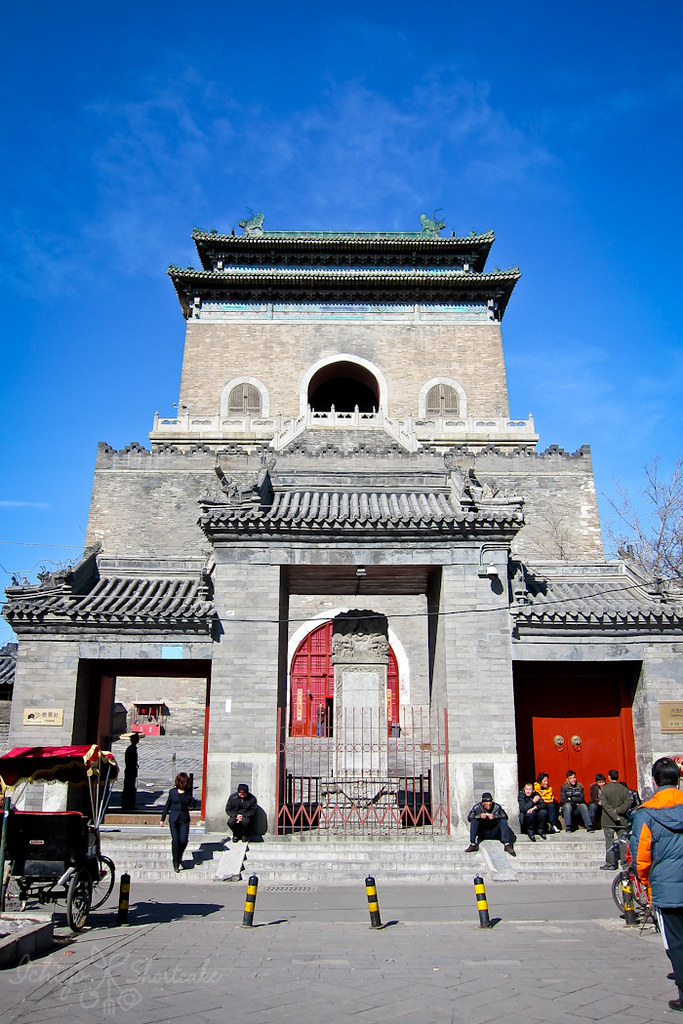 Since the last Emperor of China Pu Yi left the Forbidden Palace back in 1924, the towers had lost its chime and drum rolls until the New Year’s Eve in 1990 and then the New Year’s Eve of 2001. Since 2002 until now, the drums have been beaten many times a day for 15 minutes each and tourists can enjoy that tradition over great views. 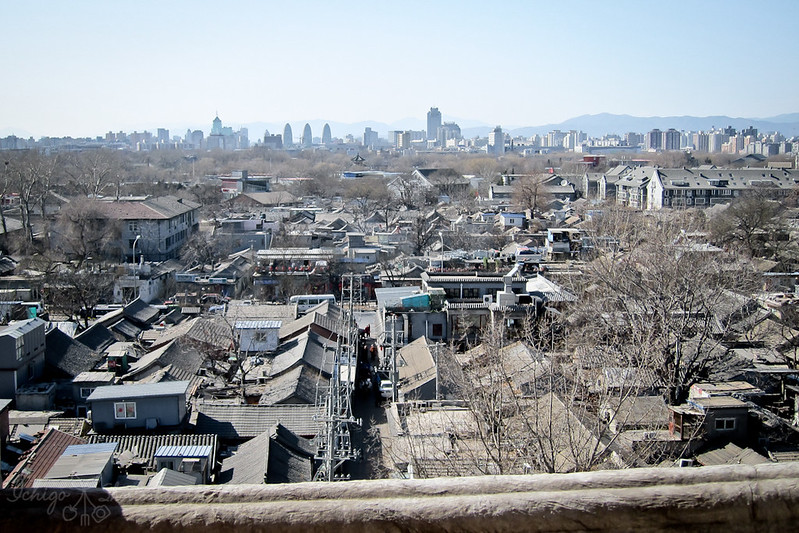 Back in the day, visitors could wander up both towers but I believe (correct me if I’m wrong) the clock tower is now off limits. The drum tower though should still be open to the public. The price is 20Yuan full price into the drum tower and the opening times are between 9am-5pm. 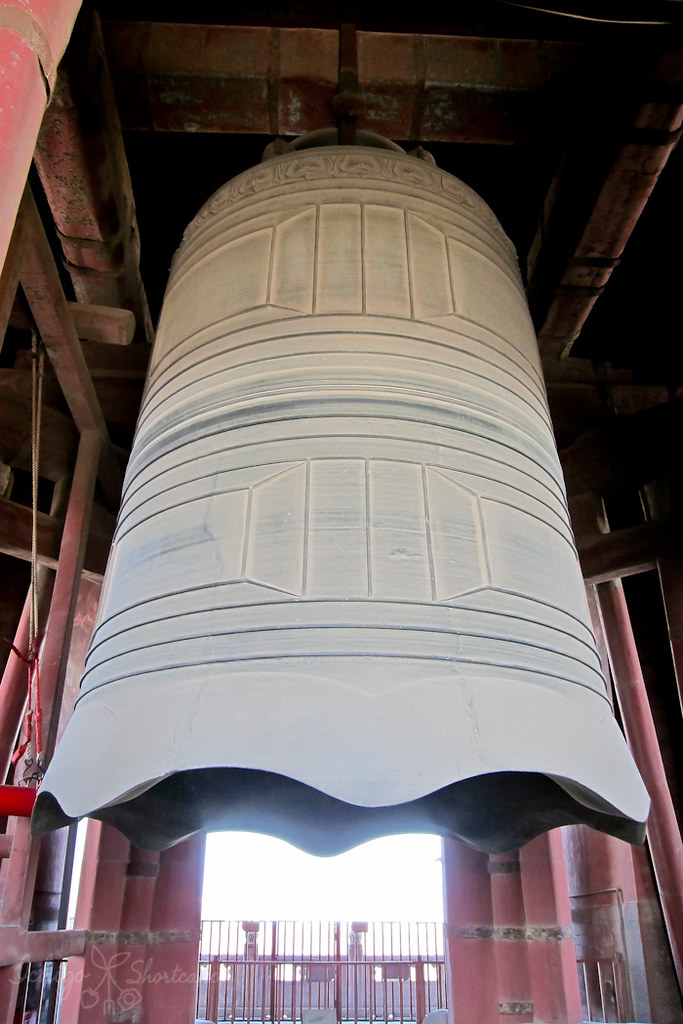 You will walk up quite steep steps to get to the top but should be doable unless if you have knee issues and cannot walk up stairs. 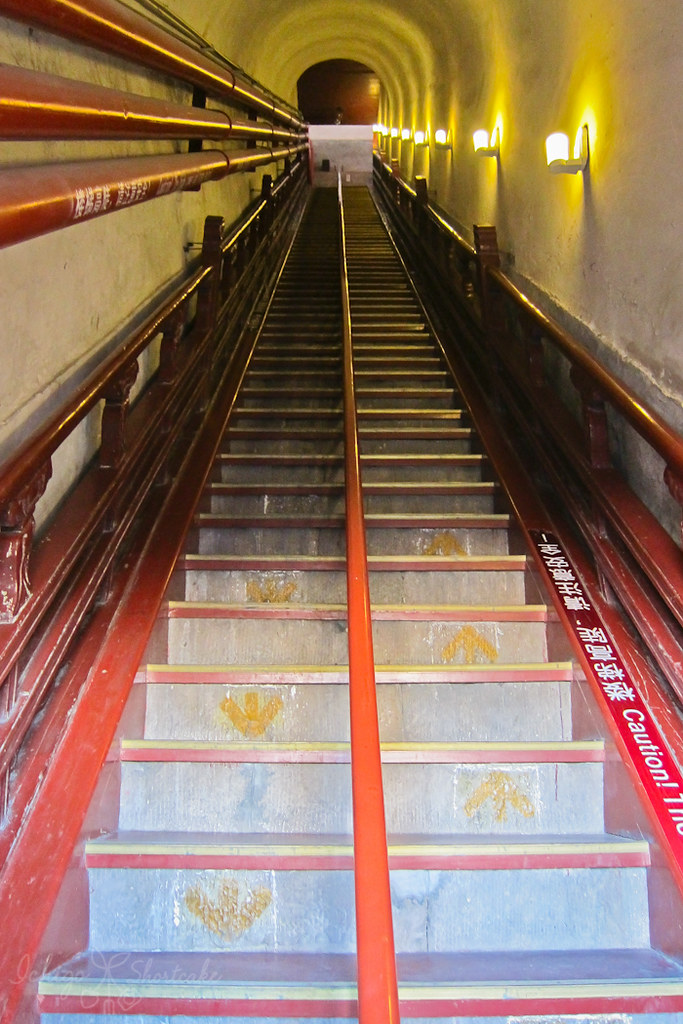 We didn’t actually visit the towers on our current trip as we had been before but I really do highly recommend a visit if you’re in the area. These photos I took are about 4 years old now so there may be some changes, it’s just there as an inspiration. 🙂 And of course, I didn’t have the right camera equipment back then so please excuse the poor image quality. 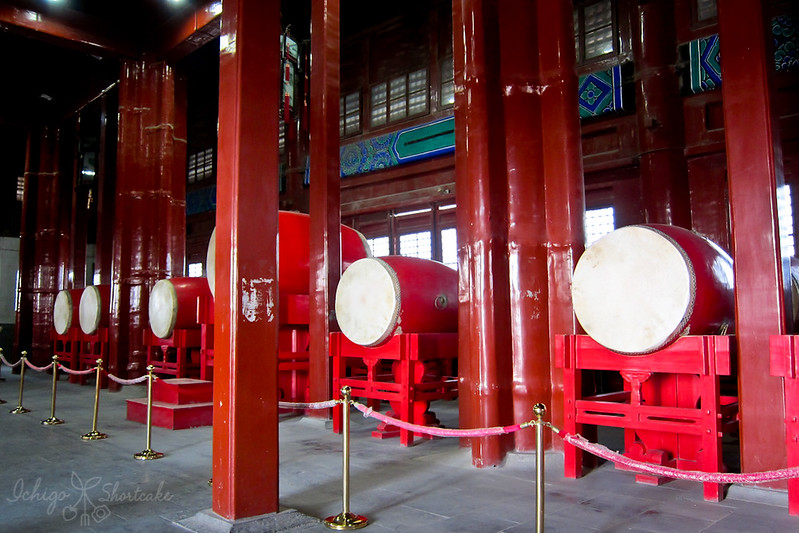 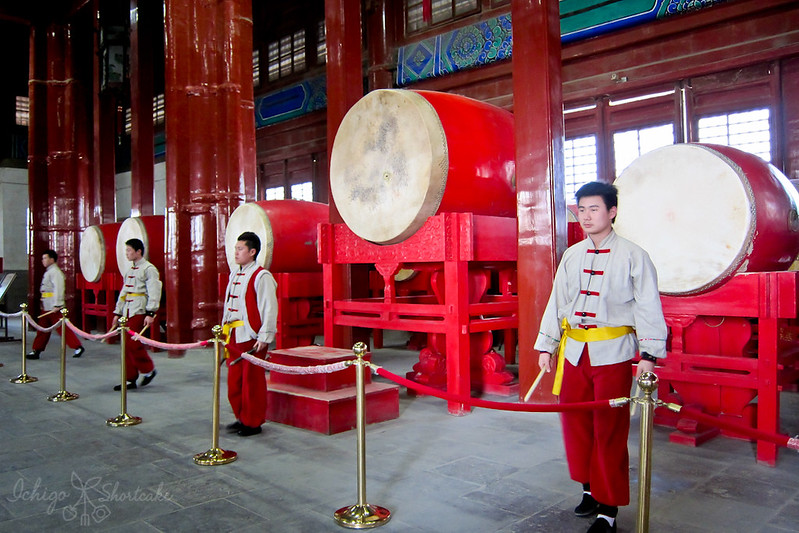 After our walk in Yan Dai Xie Jie we decided to go to dinner with Yuye’s cousin. Now this restaurant is a little far away from the hotel and the tourist areas we were just at but as his cousin recommended it as what she thinks is the best Korean restaurant in Beijing, we just had to visit. The restaurant is called Ai Jiang Shan (爱江山) in the Chao Yang District. 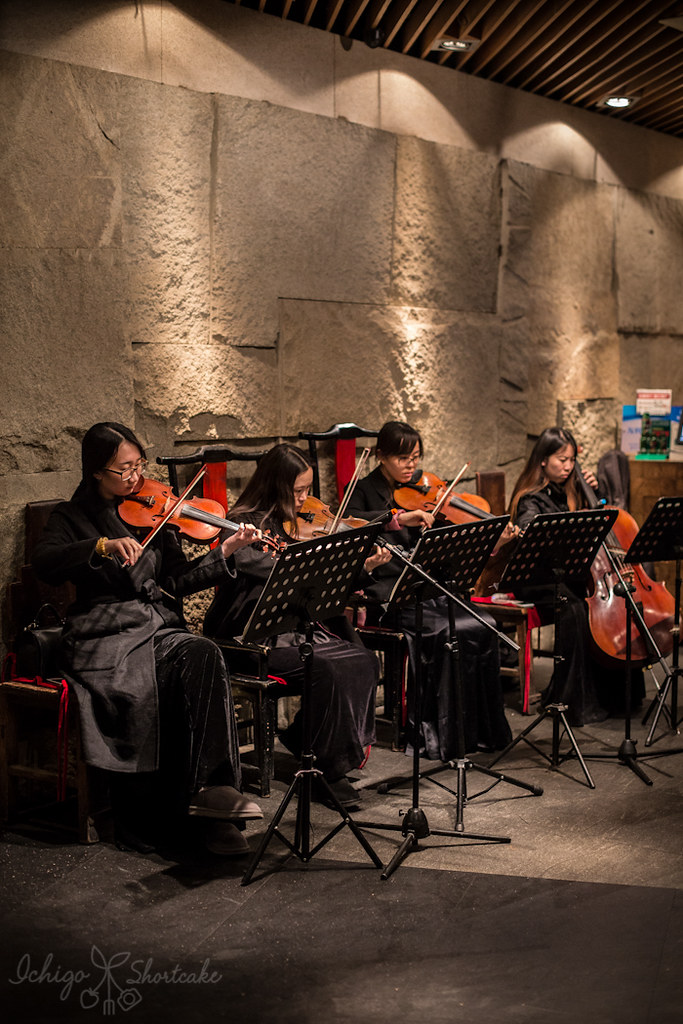 Upon first walking in, you’ll immediately be greeted by the sound of classical music flowing through the doorway, and it’s actually from a live band on their violins.

The decor was classy and elegant and even though there were tables outside as well as in private dining rooms, the whole place still gives u a sense of peace and quiet. 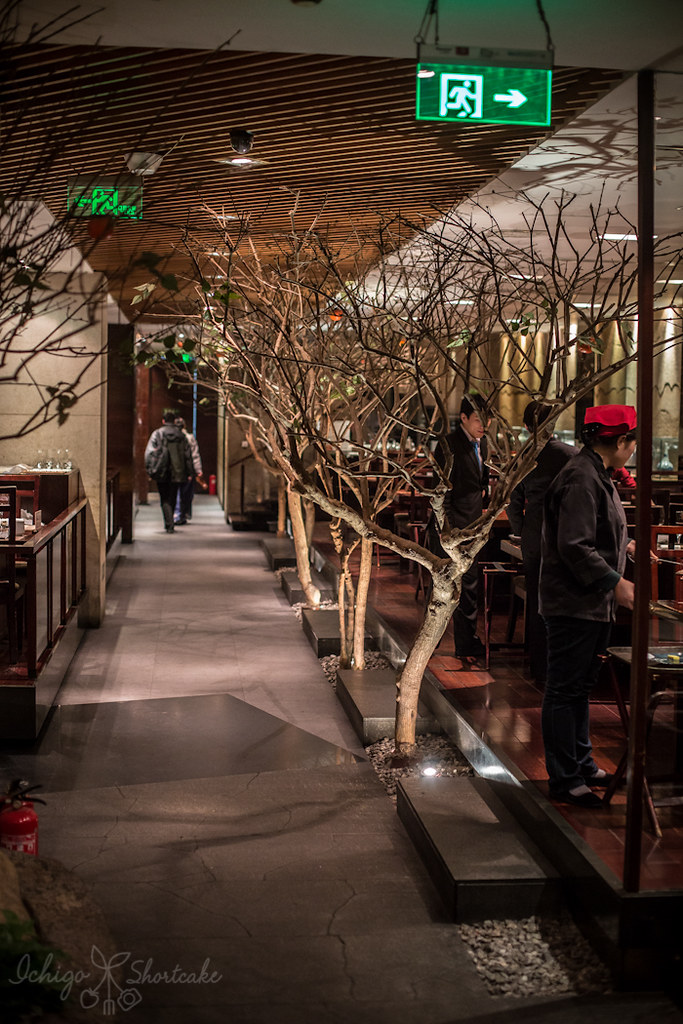 European wine bottles adorned the shelves by the front entrance and the paths were lined with small ponds and fake persimmon tree decorations. 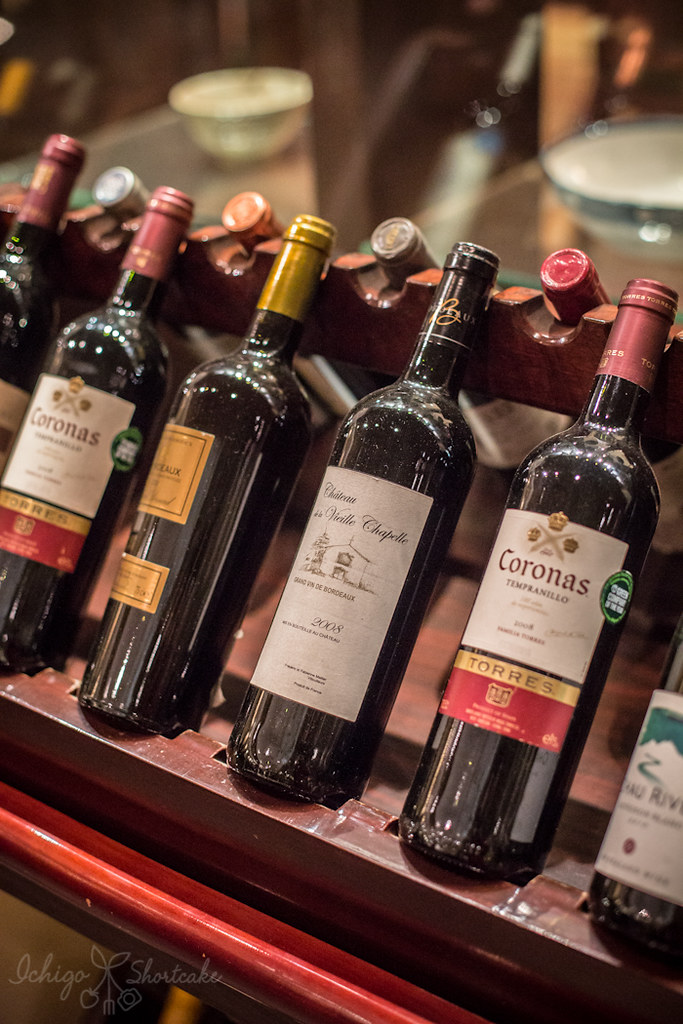 All the private dining rooms had Chinese mooncake molds stuck on the doors which I found quite amusing. I spent quite a few minutes staring at all the different designs and this was what triggered me actually buying one a few days later at a market in Tianjin. 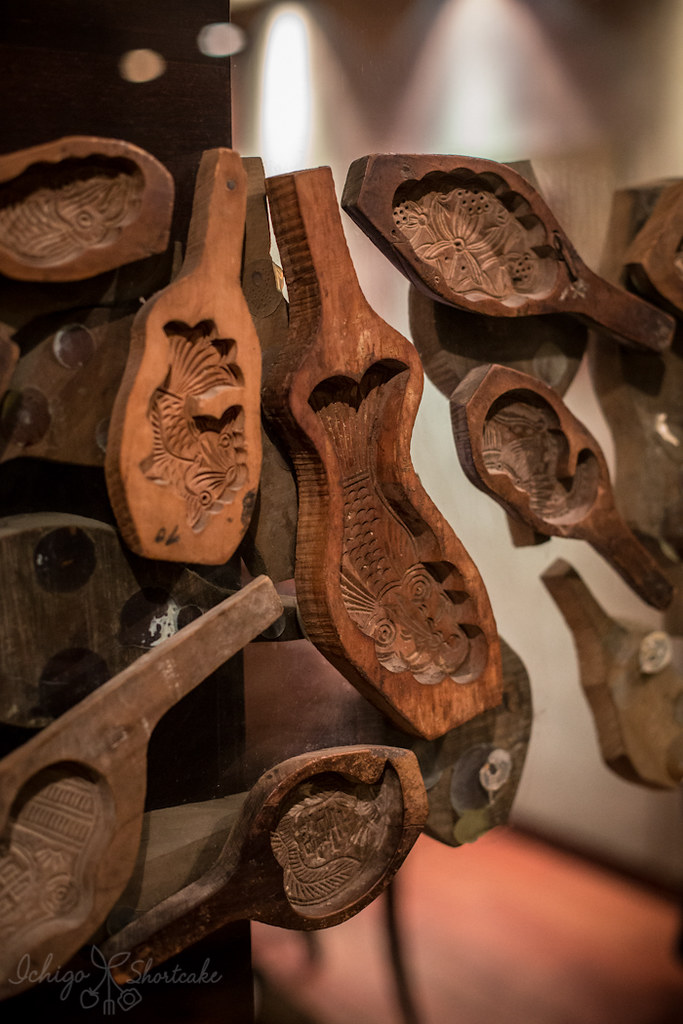 I’m not sure about the outside tables but at least in the private rooms you won’t get to cook the meat yourself (or at least it would be very difficult to do so, you will have to stand all by yourself at the end of the table). Very different to the other Korean restaurants I’ve been to where the room becomes smoke filled just a few minutes after eating, at this restaurant due to where the fan is located (at the end of the table at a very low height) and the waitresses conveniently cooking directly under it, no smoke really remains in the room at all. 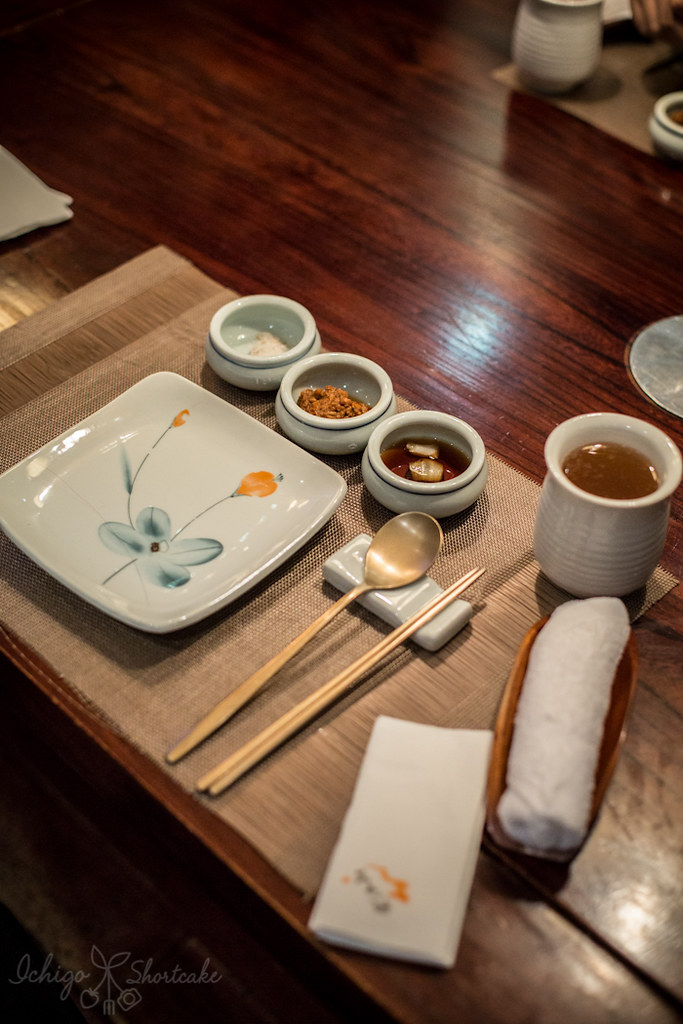 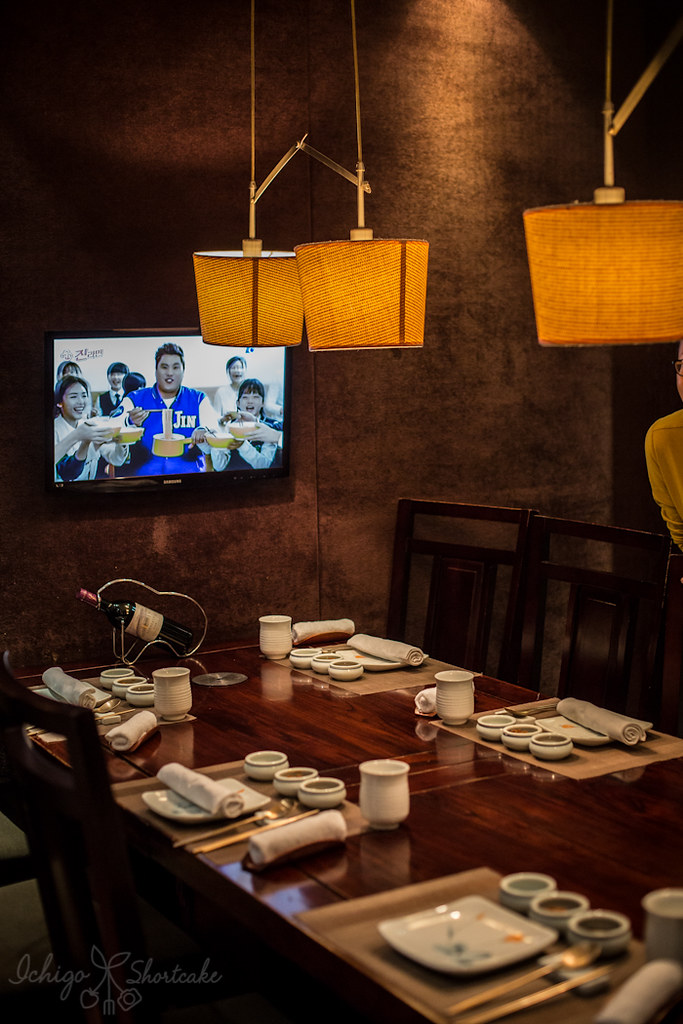 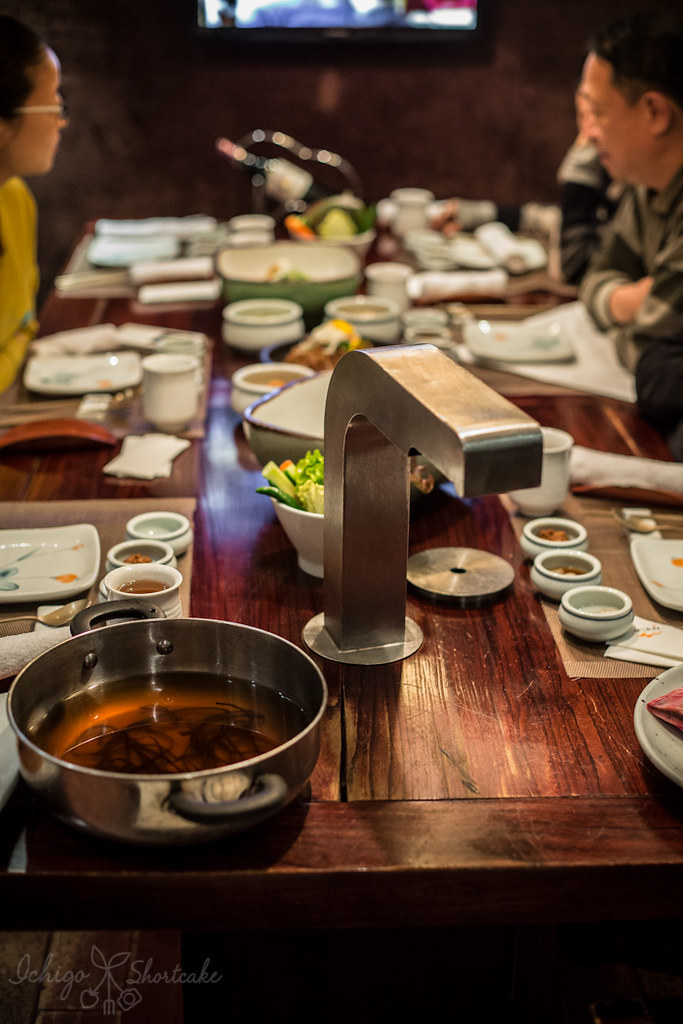 I must say though, this restaurant was quite expensive although very tasty. We ordered a lot of meat as you would imagine, including marinated and non-marinated beef ribs. Just looking at the colour and how marbled the meat were can give you an idea of their quality. They melted in my mouth and almost just disappeared, it was that tender and juicy and the marinade worked perfectly with it. At that moment, I understood why people would pay a higher price to dine there. Both the marinated and un-marinated grilled premium beef-rib cost 218 RMB each (with the current exchange rate of $1:5RMB is around $40 each). 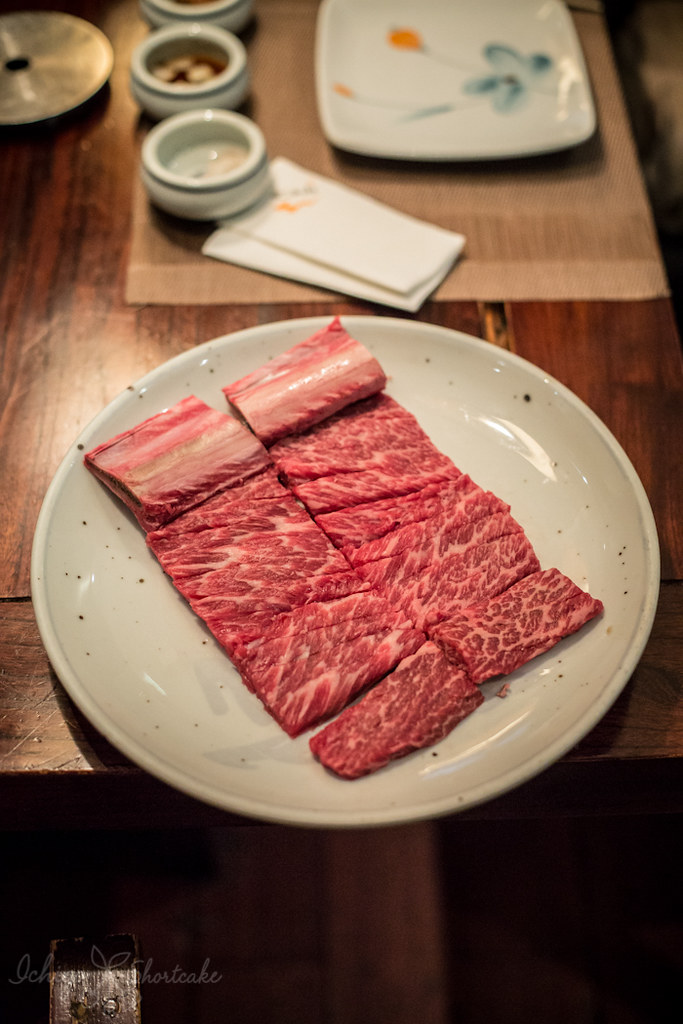 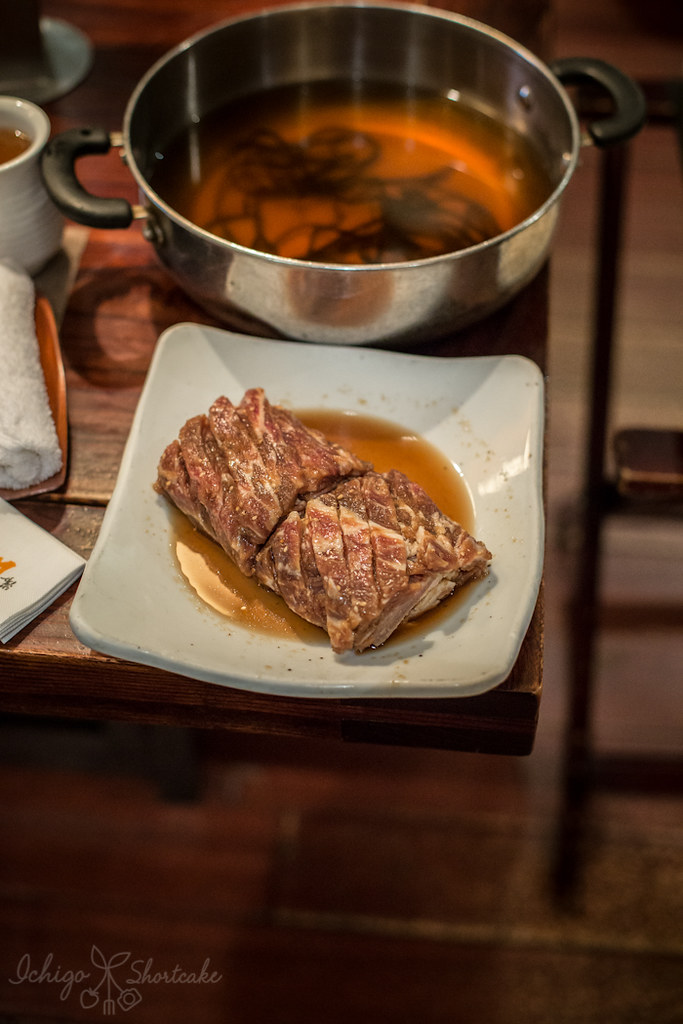 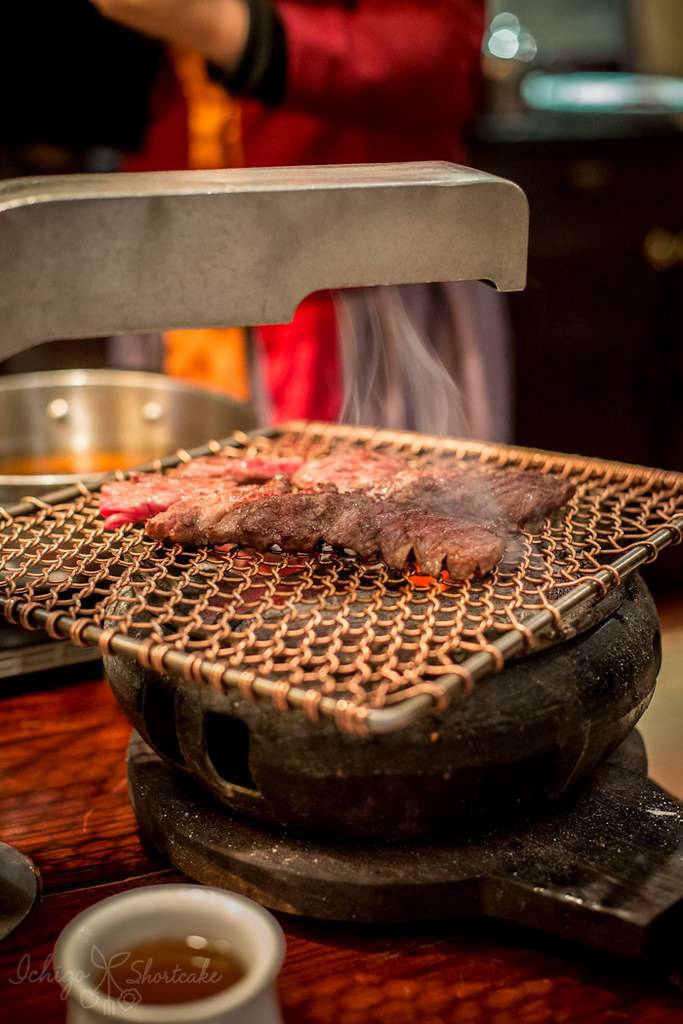 The grilled pork belly (108 RMB)was cut so beautifully but there wasn’t many pieces and the grilled mushroom cost 70 RMB. All these prices are similar to Australian prices, but you are eating in China. While I was processing the photos though I realised one thing. The number of items on some of the plates was noticeably less than what the photos on the menu showed. For instance, the mushroom photo showed 8 and we only received 6, the pork belly showed 3 pieces and we only received 2. We didn’t bring it up at the time but not sure what they would have given as the excuse if we had mentioned it…dodgy perhaps? 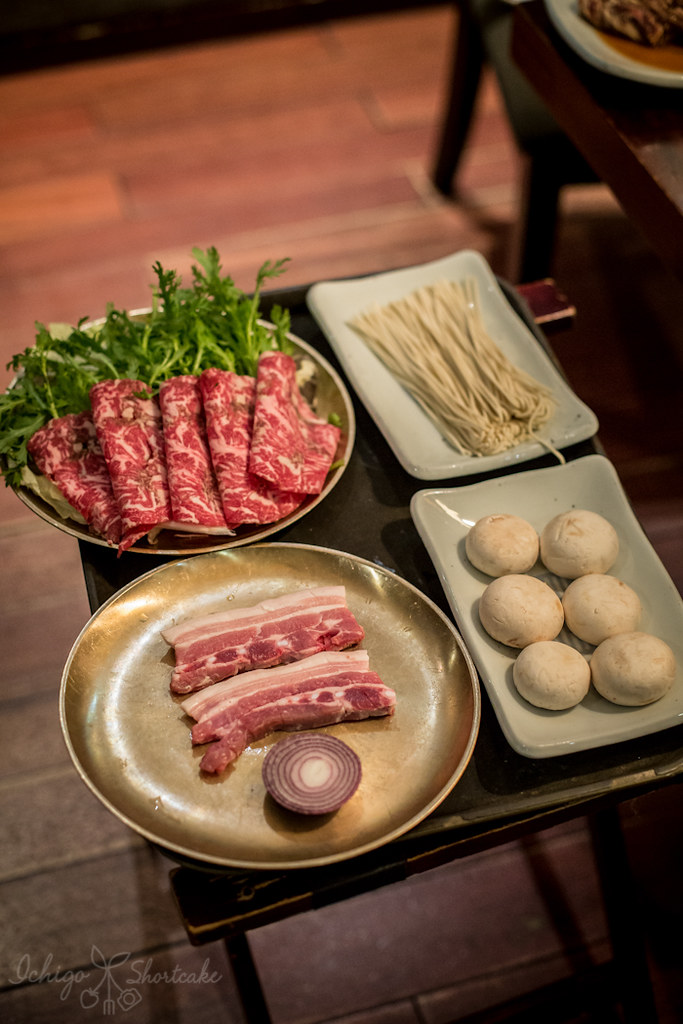 Also in this photo were the ingredients of the Special Noodle Hotpot (with beef) (98 RMB). The soup was very flavourful and again the beef was super tender. 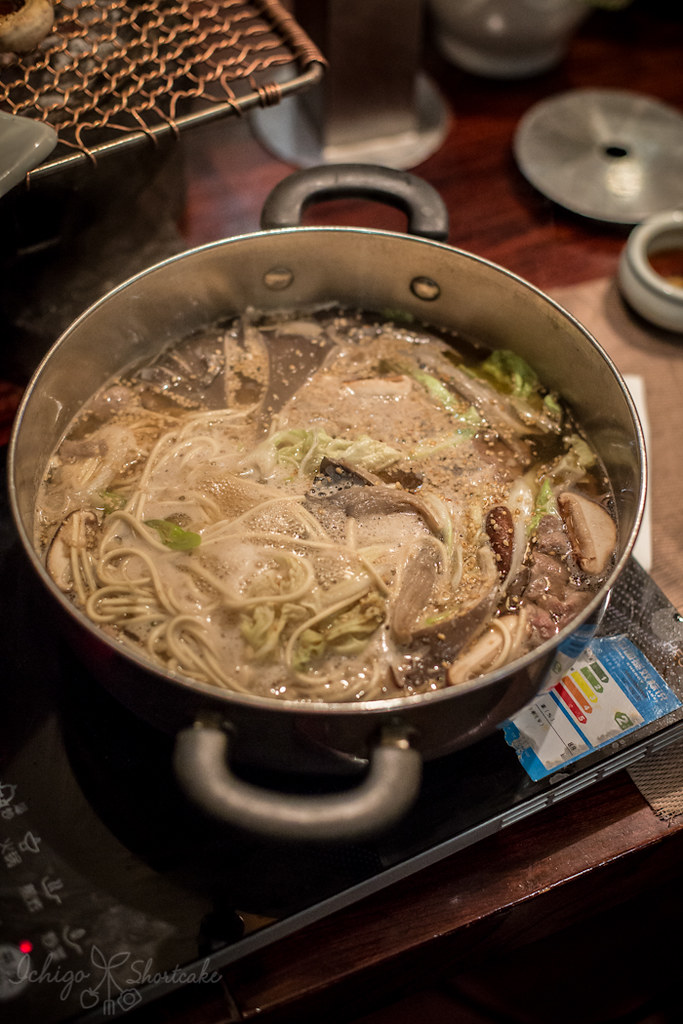 We also ordered the boiled ox tail soup (75 RMB) but I found this soup a little bland compared to the other dishes and since we had the noodle soup already, we all hardly touched this one. 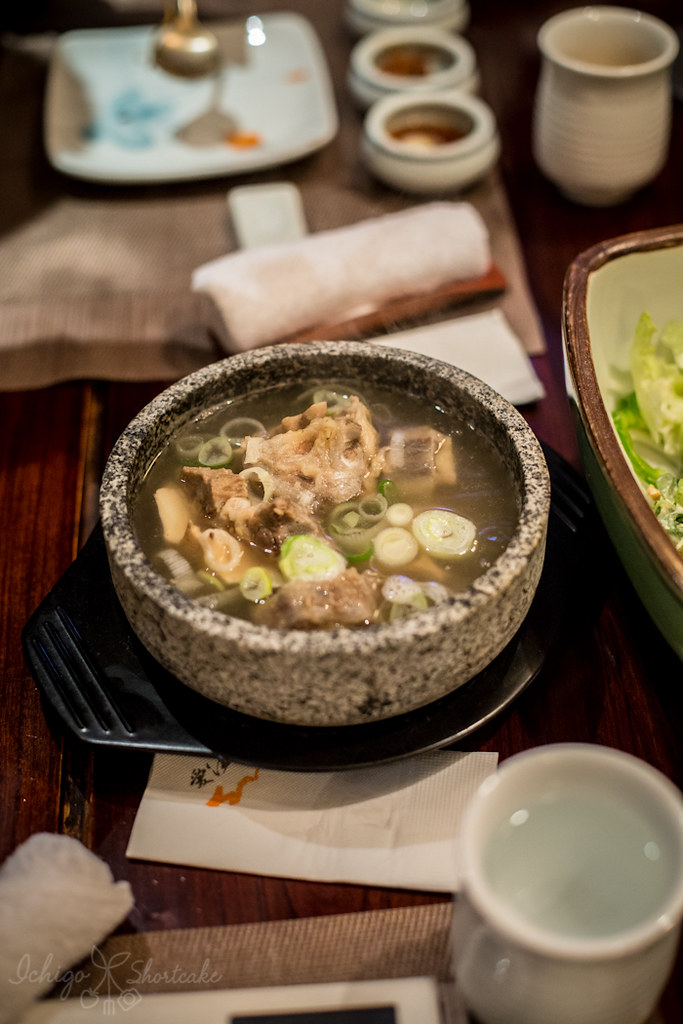 The grilled Atlantic croaker (88 RMB) wasn’t my favourite of the night, why would it be when there was so many marbled meat dishes? It was a little dry but the overall flavour was good. 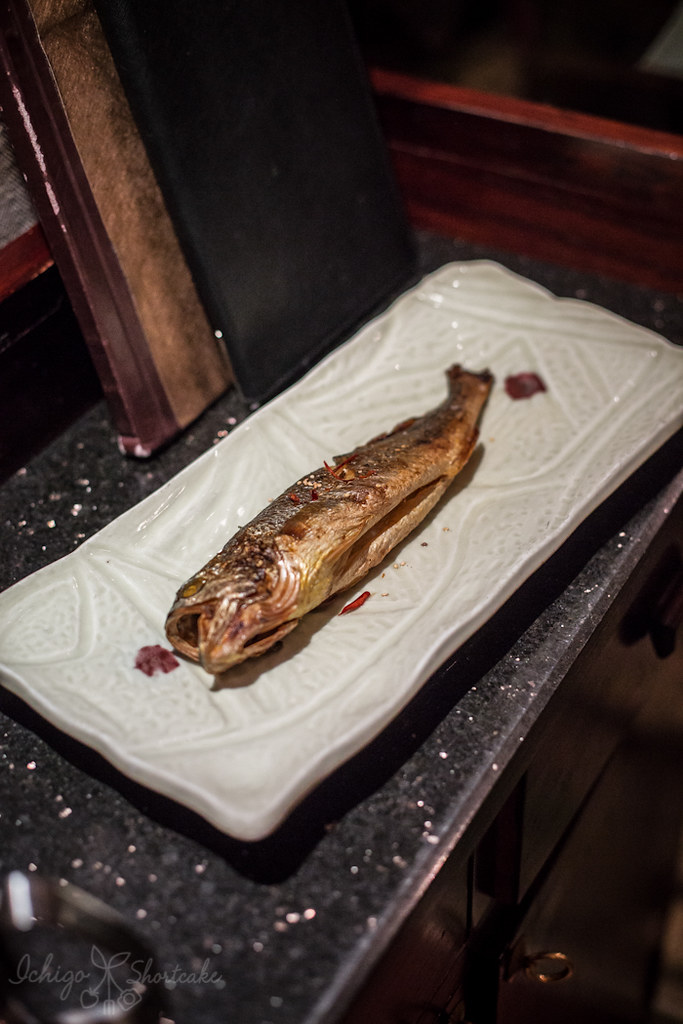 One of the highlights of the night though, surprisingly, was the kimchi fried rice (62 RMB). Such a simple fried rice with a fried egg on top packed so much flavour into it that I couldn’t stop eating. I think everyone else felt the same way and the rice disappeared very quickly. I totally could have had the whole thing myself. Perhaps I will try to replicate it for the blog one day. 🙂 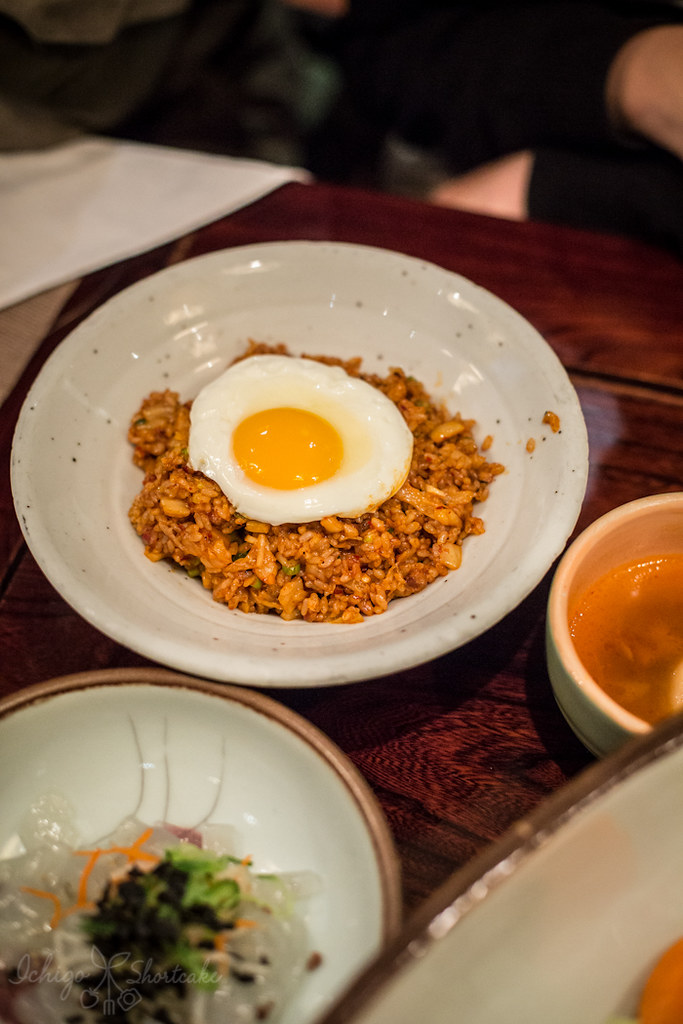 The grilled kimchi hot plate with pork belly (78 RMB) was likewise quite spicy with well balanced flavours but again the grilled beef ribs outshone it by a mile. 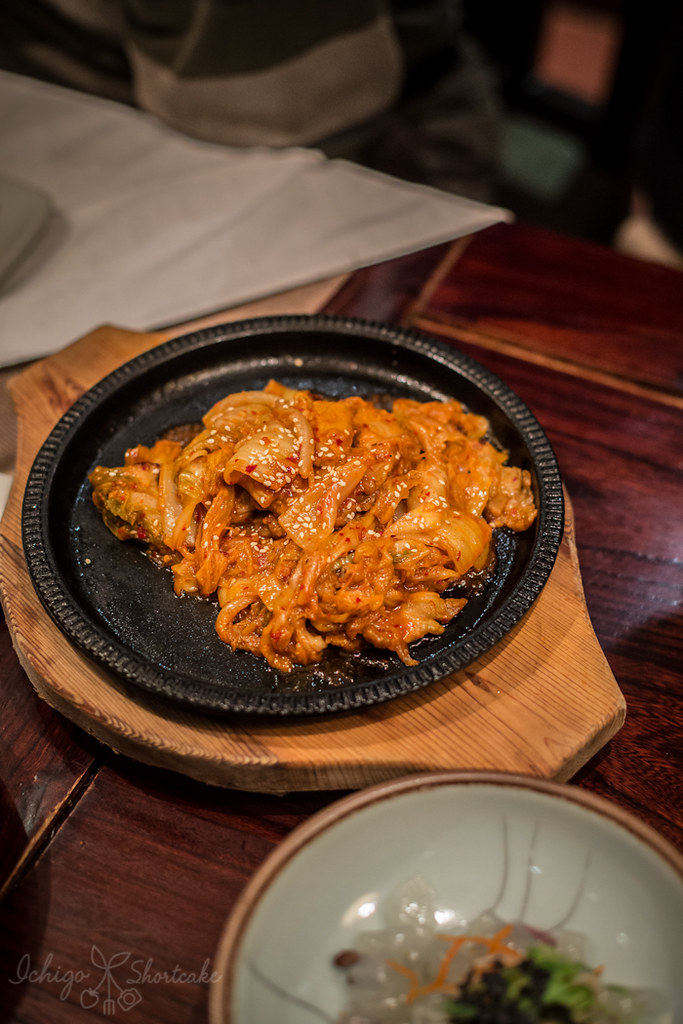 The chapche (Korean vermicelli noodle salad – 58 RMB) was also tasty and made well, but since we have it all the time at Korean BBQ restaurants in Melbourne, it was at the bottom of the ‘must finish’ list. 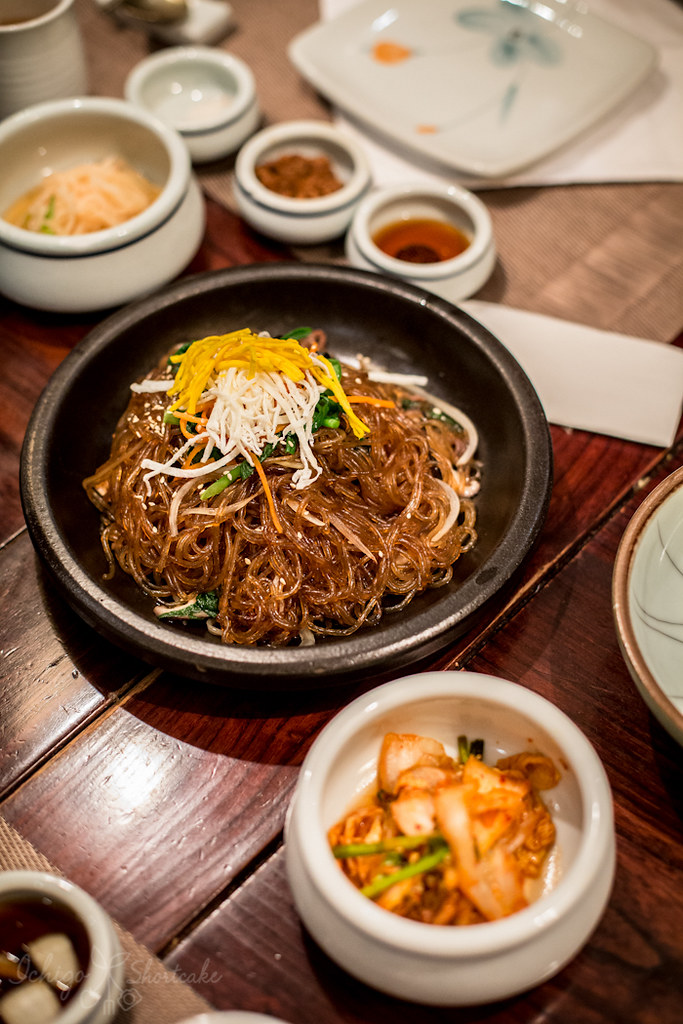 As usual, the meal also came with many free side dishes that could be topped up as they ran out. Don’t you just love Korean restaurants because of this? Make sure you don’t overeat on the free sides though since it can be easy to do…not speaking from experience or anything of course. 😛 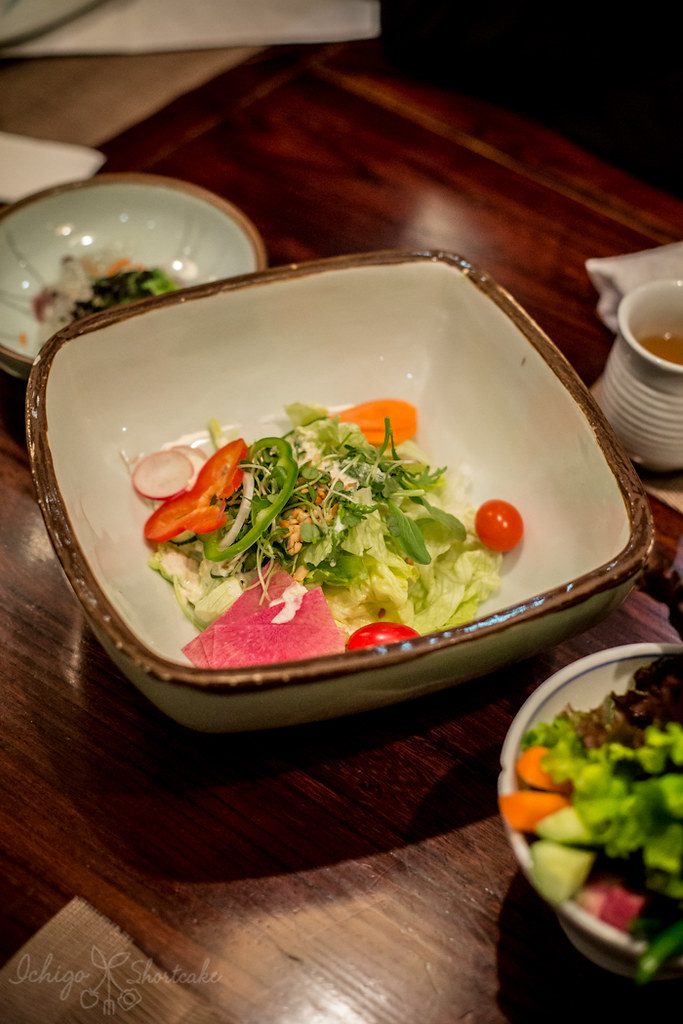 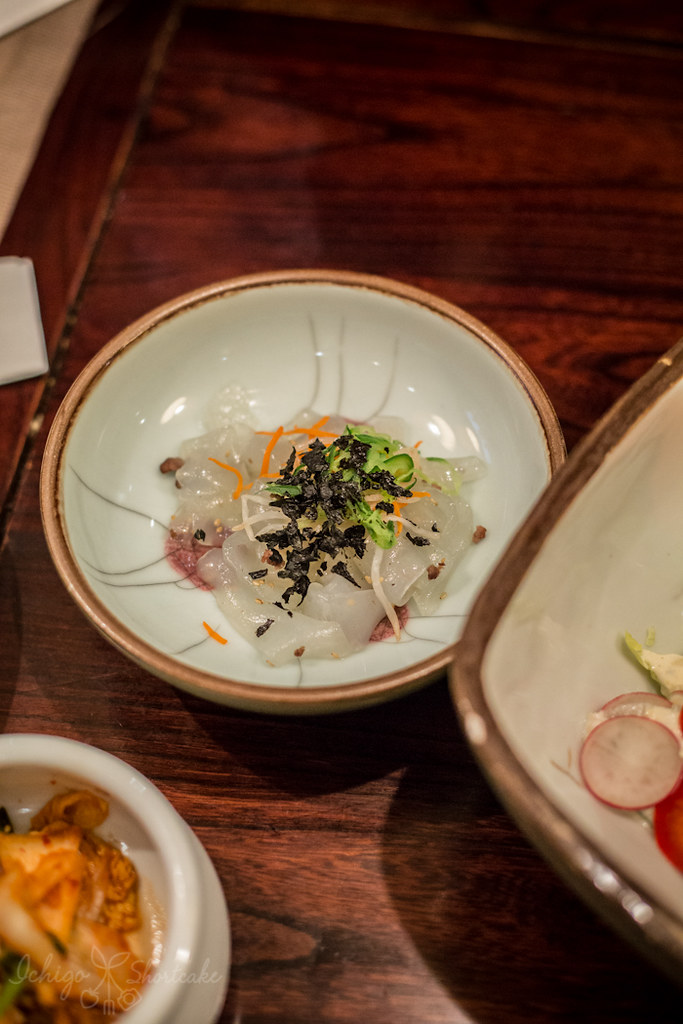 Also, the meal wouldn’t have been complete without ordering soju (Korean rice wine)! We just ordered a cheaper one called Chamisul Classic which is also available from some stores in Australia (50 RMB) and shared it between the few of us. Soju is higher in alcohol (this one was 19%) and doesn’t have very strong flavours so the alcohol content tasted quite strong. I had a few and instantly became…not myself. Lets just leave it at that. I tried hiding the fact but not sure how well I did that… 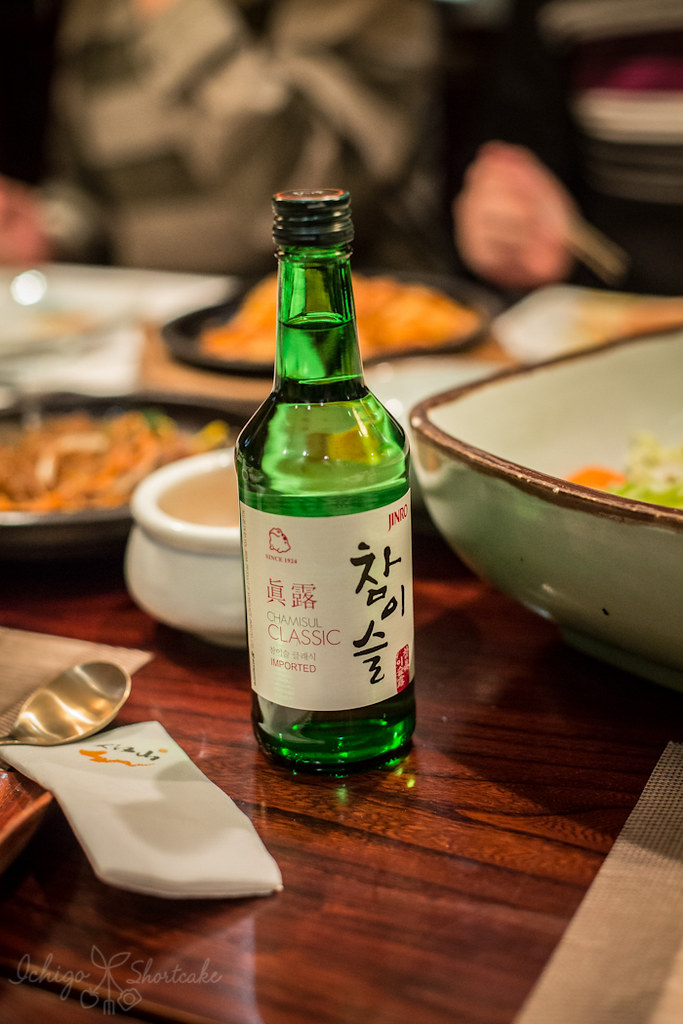 If you enjoy a classy, quiet and atmospheric dining experience along with well trained staff and very high quality meat, then you’d love Ai Jiang Shan. Rated as one of the best Korean BBQ restaurants in Beijing by many locals and foreigners, it has a good reputation and all for a good reason. Although the prices are quite expensive, I think it was quite worth it. The staff might not speak great English but at least all the dishes have English translations, and even then if you can’t understand them, just go by the photos, that always works!

Another tip: If you’re in that neighbourhood and don’t feel like Korean, there’s apparently a ripper Japanese restaurant next door too.

Address: Gulou Xidajie, Dongcheng District
Note: I know according to Google Maps, the drum tower is ‘permanently closed’ for some reason. I looked it up and apparently it was just being renovated and should already be open.