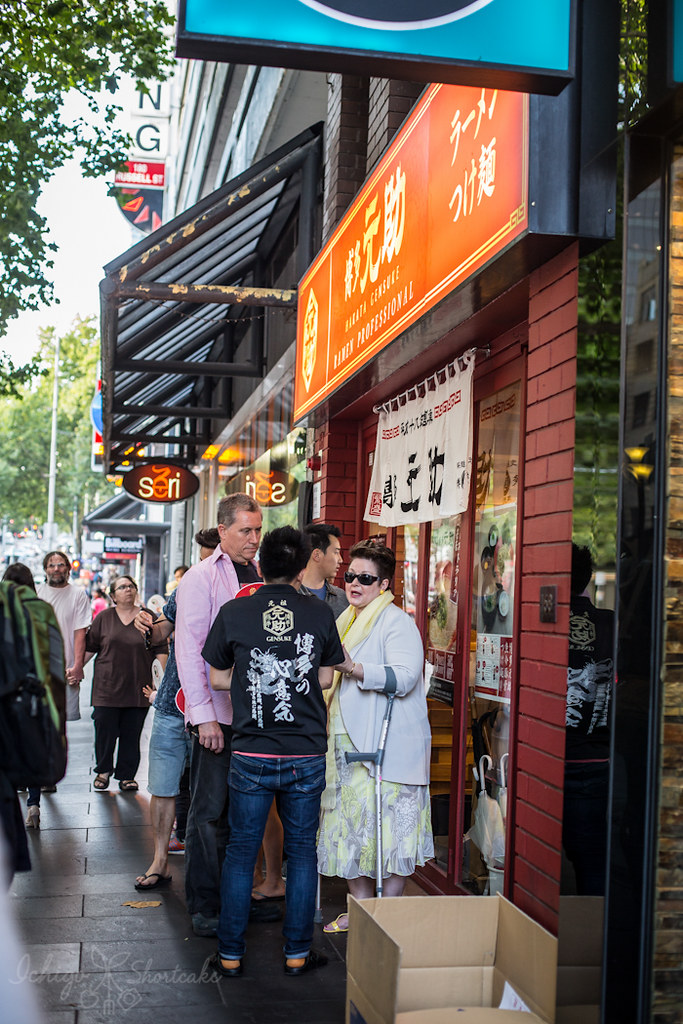 I must say, eating out in Melbourne is starting to get a little difficult. Why you ask? Because of the queues. Perhaps it’s because everyone’s turning into a foodie so all the good restaurants almost always have queues. One of the longest queues has to be Hakata Gensuke in the Melbourne CBD. The line is there pretty much day in day out and varies between 10 to 45 minutes. 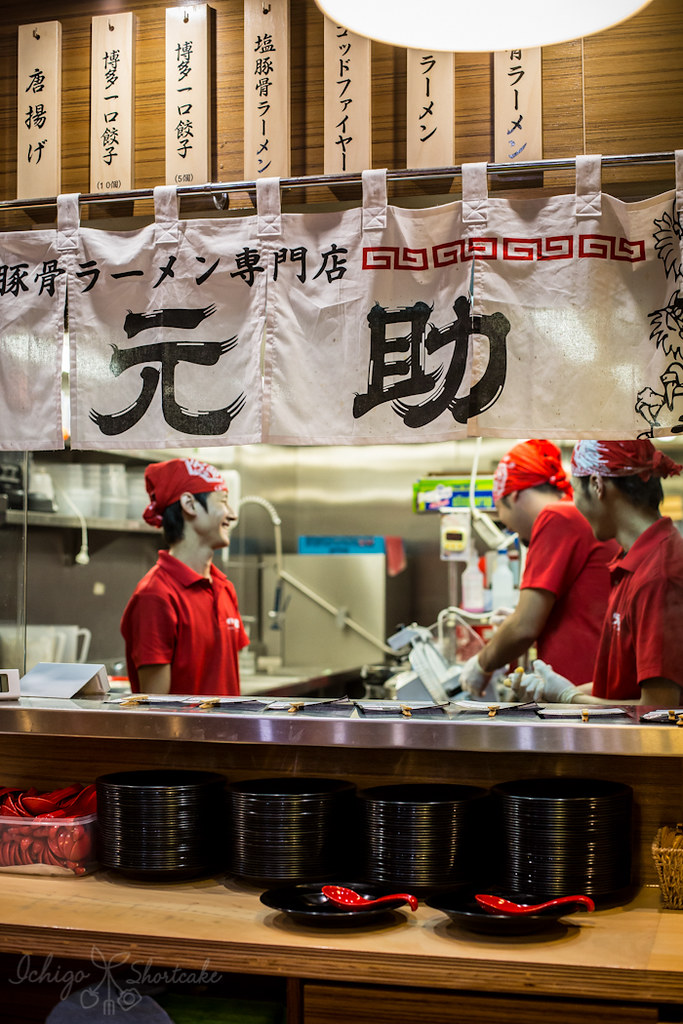 You will receive the menu beforehand so you can make your decision as quickly as possible. But, there is a shortcut. For those of you who didn’t know, you can always request to go upstairs to have tsukemen. I’m not 100% certain but quite sure that as long as some of the table gets tsukemen, the remaining are allowed to order ramen from downstairs. 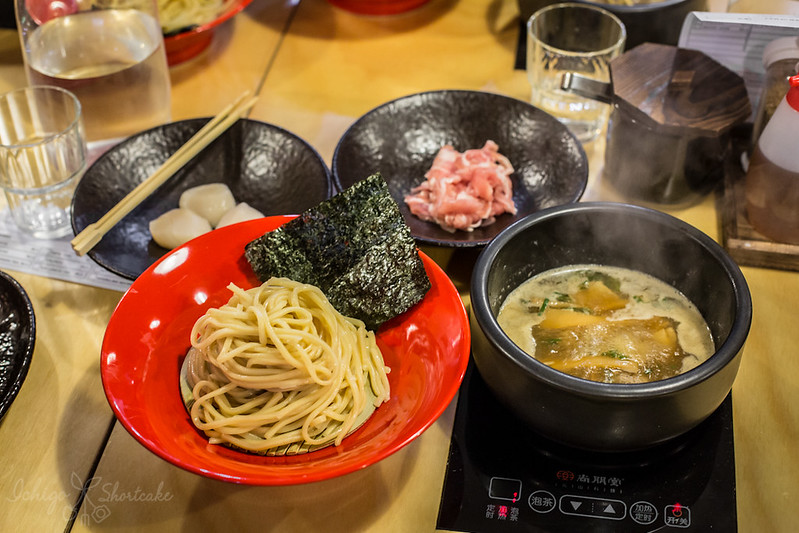 The first time I visited Hakata, we all decided to try the tsukemen upstairs and were instantly granted a table but noticed that the table behind us were eating ramen as well.

For those of you who don’t know, tsukemen is a type of noodle that’s similar to ramen in that it uses ramen noodles but instead of it being soaked in ramen soup, it’s served dry with a condensed and saltier version of the soup to dip with. The dipping sauce is heated on the stove in front of you and you eat it like you would hot pot. It also comes with added extras of fresh sliced pork, fresh scallops amongst others to add to your soup. It was half price that day (normally $4) so I couldn’t help myself. 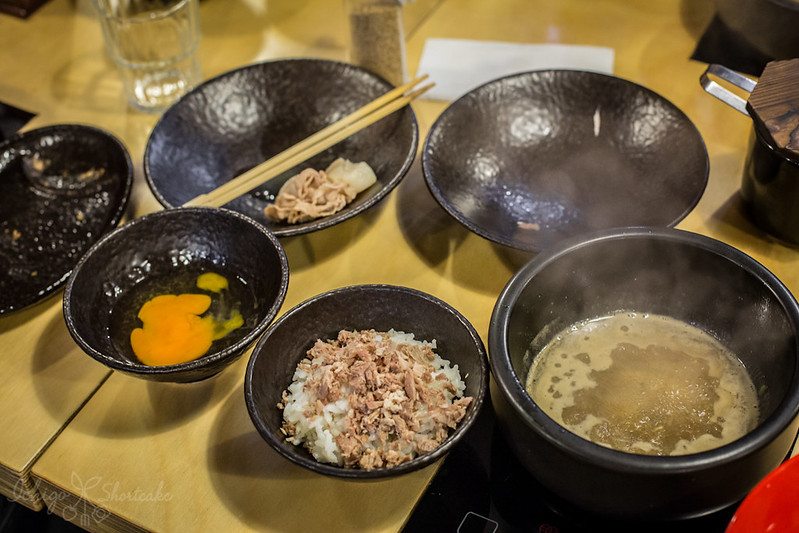 When you finish the noodles, remember to keep some sauce so you can make ‘risotto’ with the sauce, rice and egg. The consistency will depend on how long you keep the egg mixed in for, if you cook the egg from the start, it will overcook so put it in towards the end and just mix through. If you do this, it will turn out like Yuye’s version below which he was very proud of. 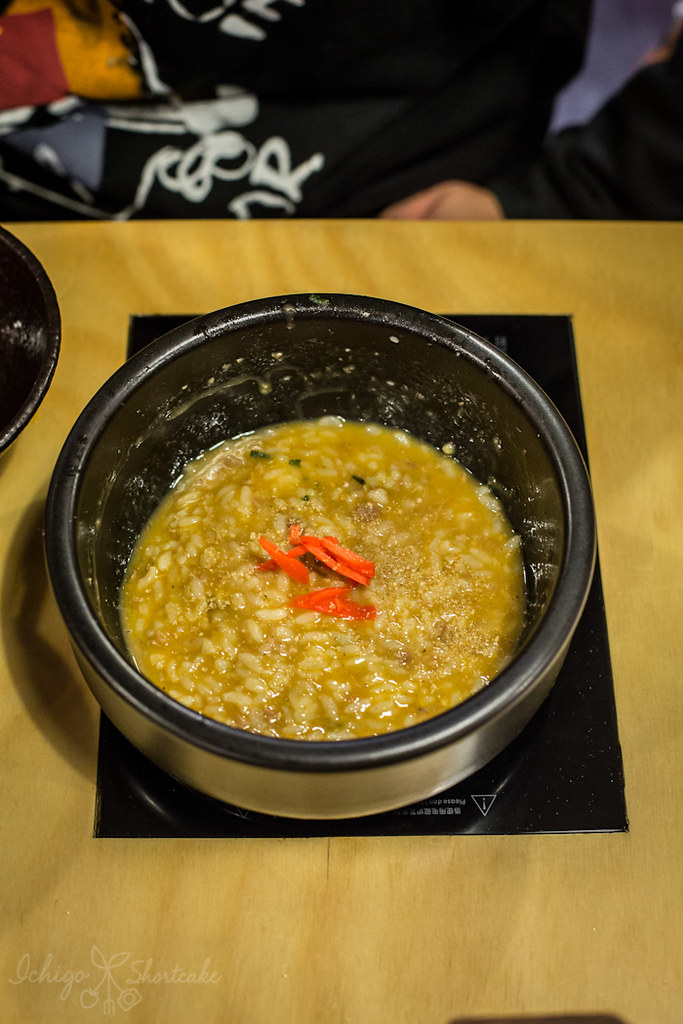 If you put the egg in too early and leave the heat on, the risotto will turn out like below – which was everyone else’s. Still tasted alright but the rice became a bit drier. 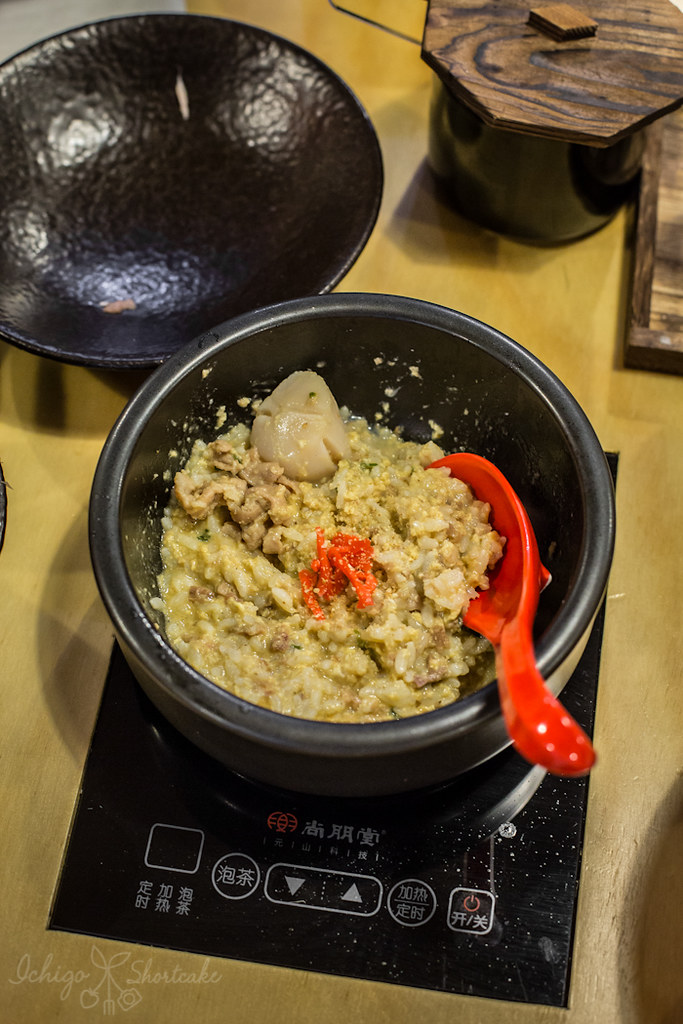 Overall I liked the tsukemen but didn’t think it can compare to Hakata’s regular ramen. The dipping sauce was a bit too salty as it kept getting heated and well, we just like the feeling of being able to slurp up the ramen soup after finishing the noodles which you can’t do with tsukemen.

We’ve since visited quite a few times and each time ordered ramen. I usually get the signature tonkotsu ($13) and usually get an egg ($2) with it but I was not very hungry that day so I didn’t get one. Their tonkotsu soup is one of, if not the best in Melbourne at the moment. The soup is still not as thick as Gumshara in Sydney but it’s getting there. The flavours are intense and immensely tasty and definitely will satisfy any ramen craving. 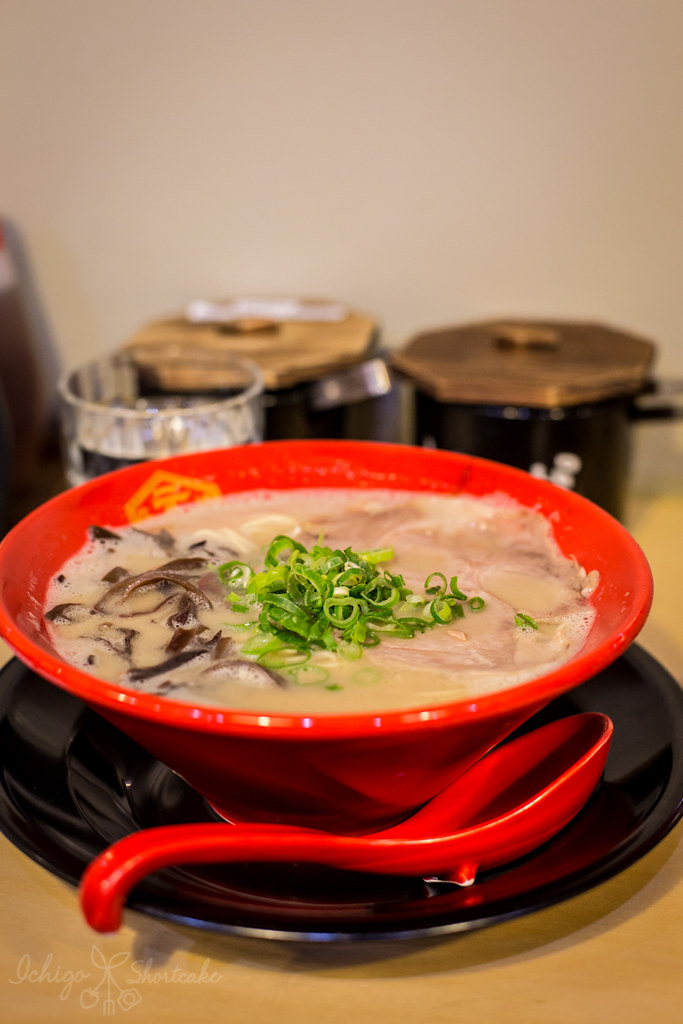 Yuye usually orders the signature tonkotsu along with the special topping combo ($13+$8) which he then shares with me. The combo comes with extra pieces of chashu, nori and an egg. 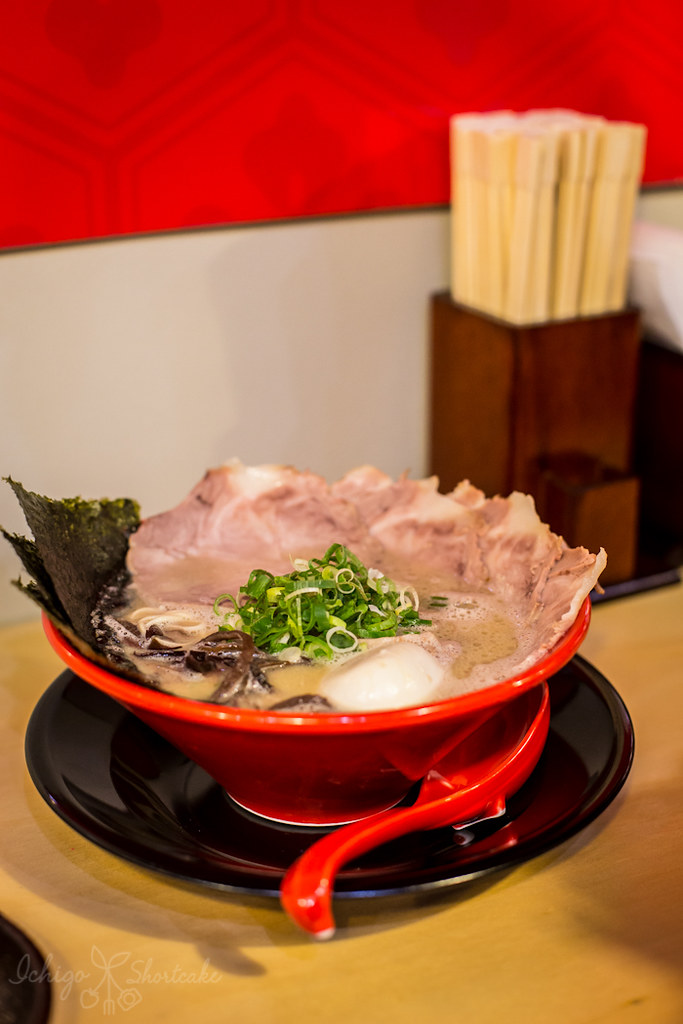 I quite like the god fire ($14) as well, but find that even the level 1 is a bit overpowering so my friend and I both tried the level 1/2 which you can ask for if you can’t take heat as well. It works out just right in my opinion, giving enough heat while you can still taste the full bodied soup. 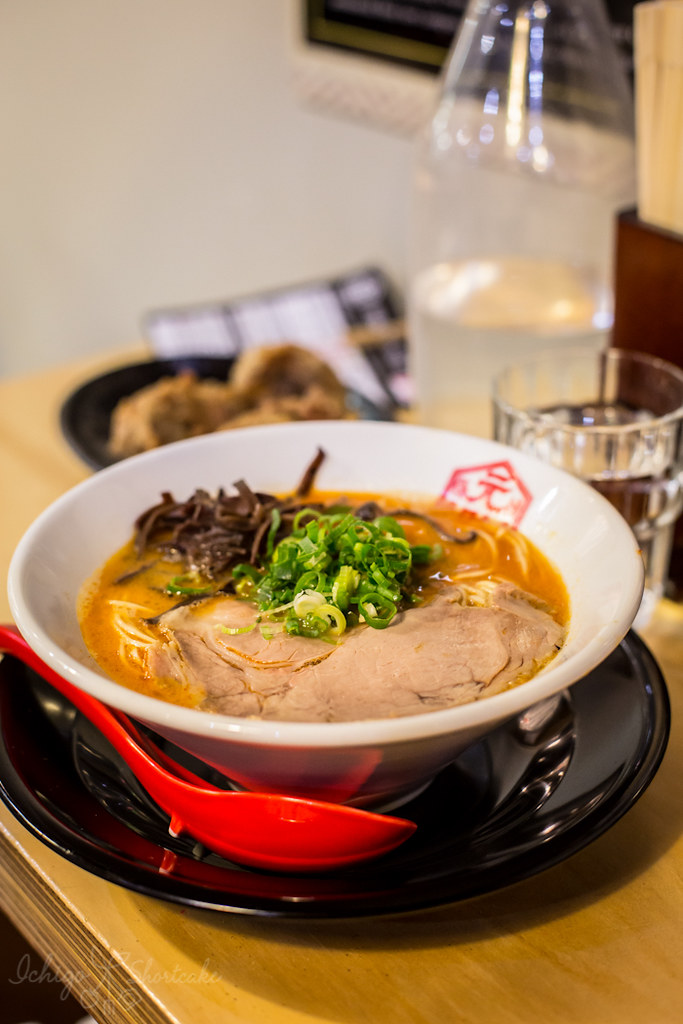 Along with the ramens, we also ordered the karaage – fried chicken ($10). It only comes with 3 pieces but they are very large pieces. The outside is crunchy and because the pieces are quite large, the inside is always very juicy. 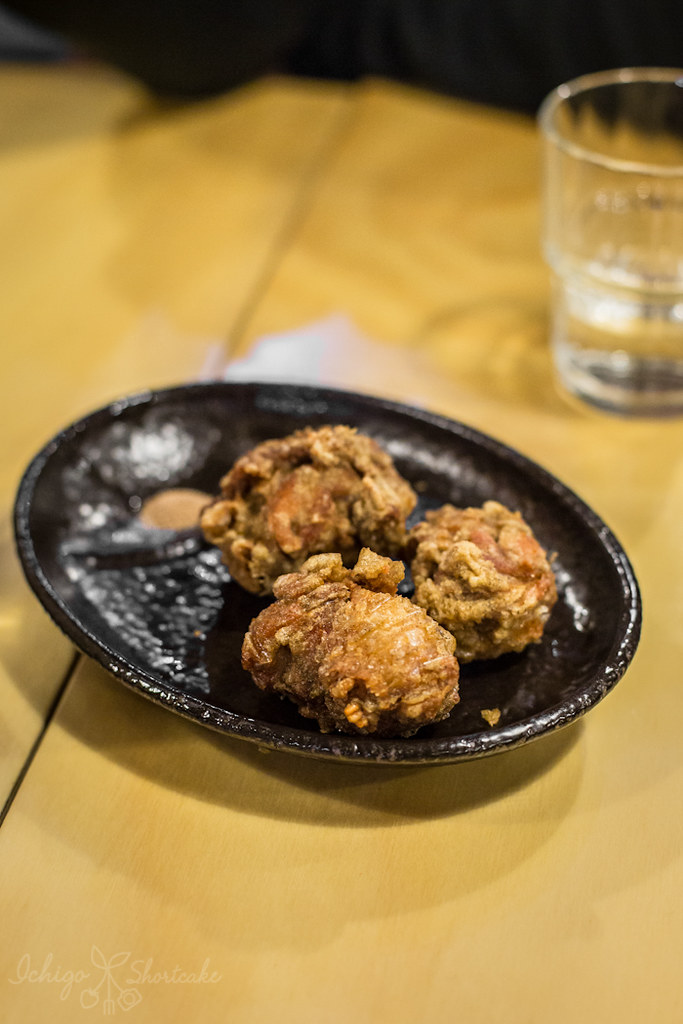 Thankfully, Hakata Gensuke has opened up a new store in Hawthorn which is a lot closer to home for us. We’ve been a few times already and the quality is the same as the city store. In fact, we find the eggs here even better. The space is bigger so can fit more people but they don’t serve tsukemen here. 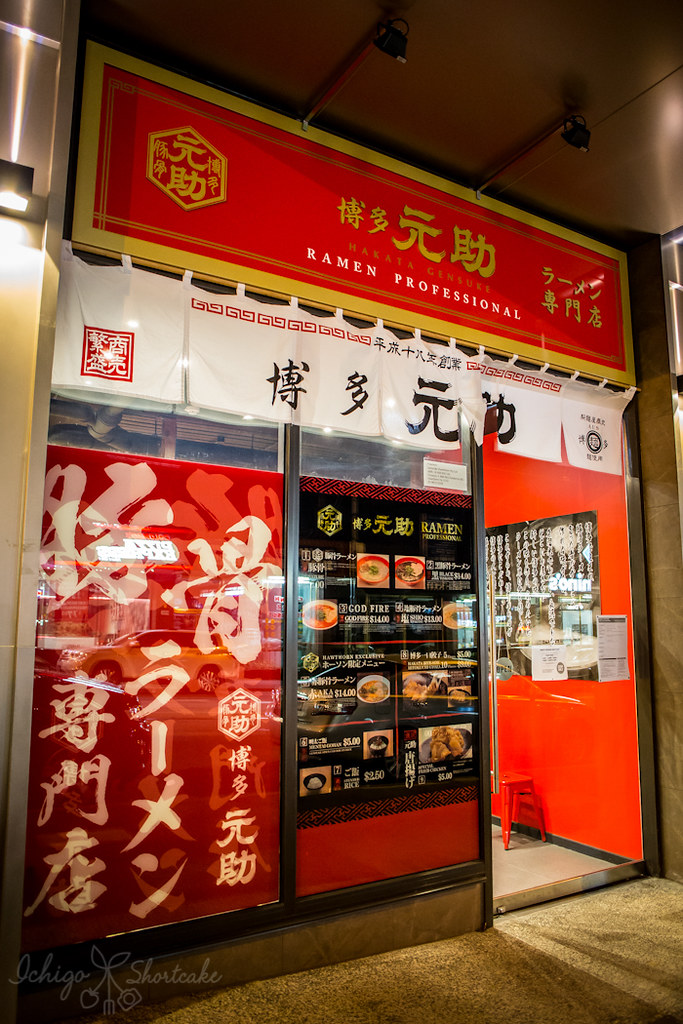 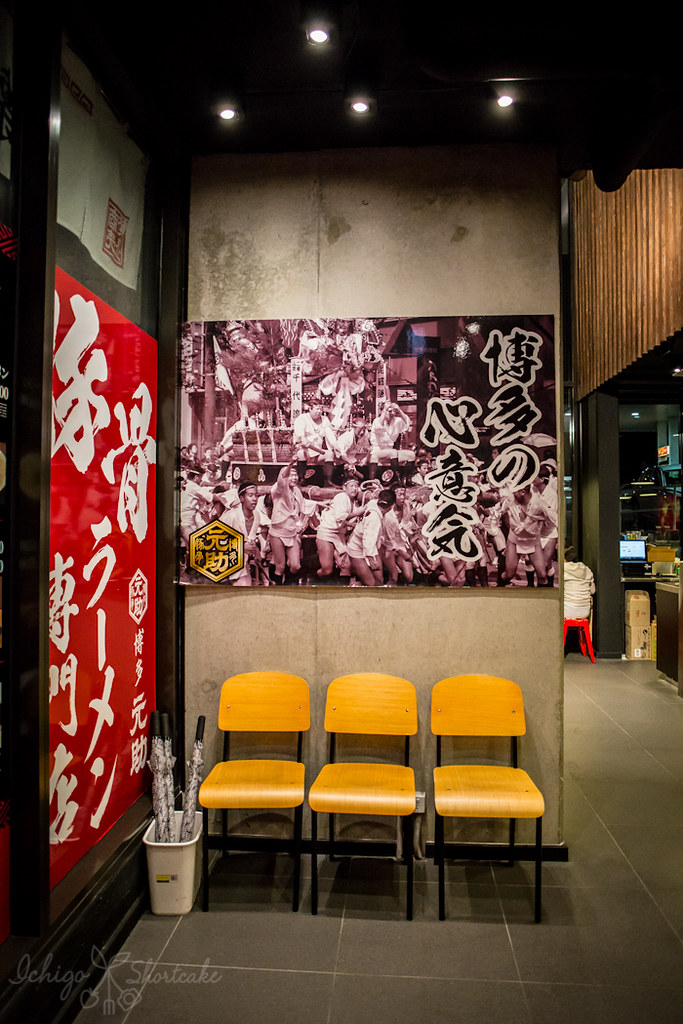 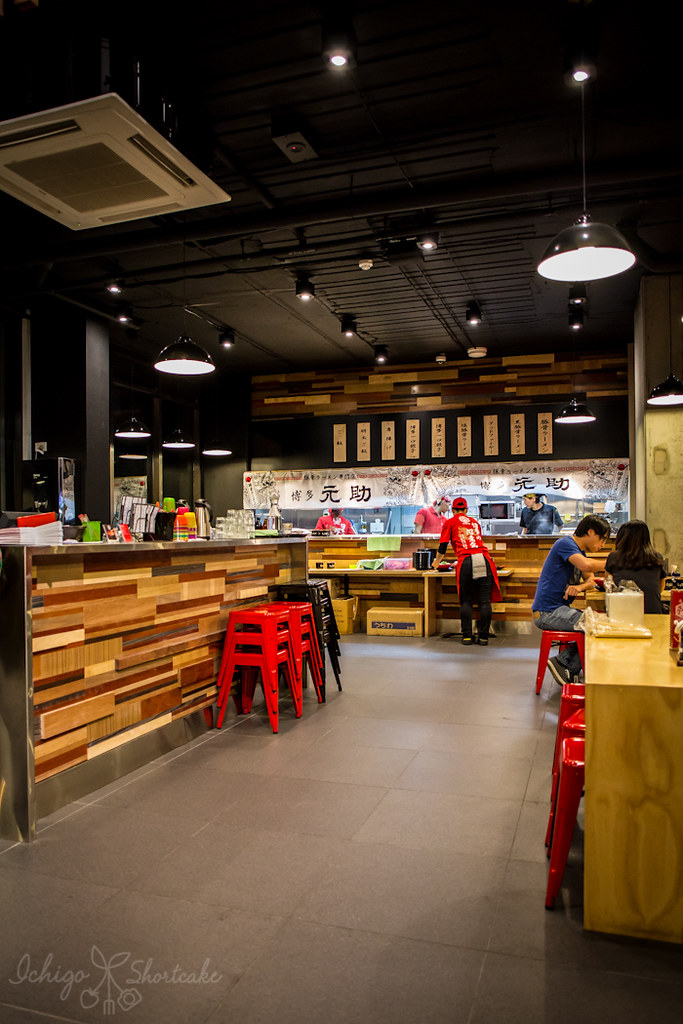 There’s an exclusive ramen only available at the Hawthorn store which is the aka tonkotsu ($14) which is about a god fire level 1 with spicy cod roe added to it. However, I couldn’t actually taste the cod roe because it was overpowered by the spiciness and the flavour of the soup which was a shame. 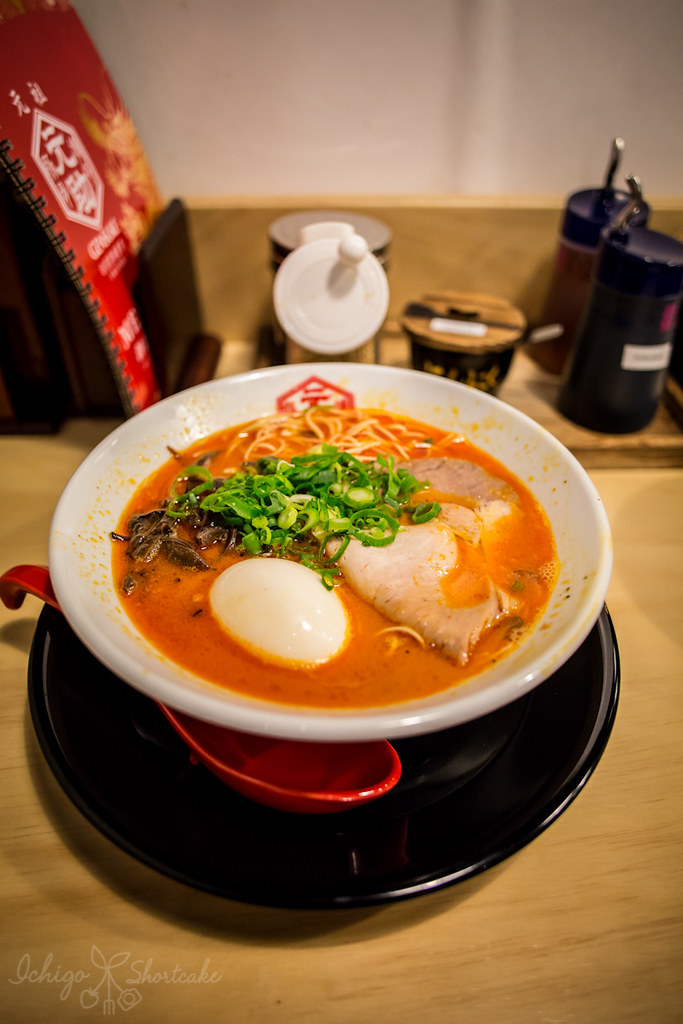 Yuye ordered the signature tonkotsu again with the additional special toppings ($8), as well as another egg. That’s right, 2 eggs. The waitress had to confirm twice that she got it correctly. They actually forgot our second egg and had to be reminded. It shows just how often someone orders 2 eggs. 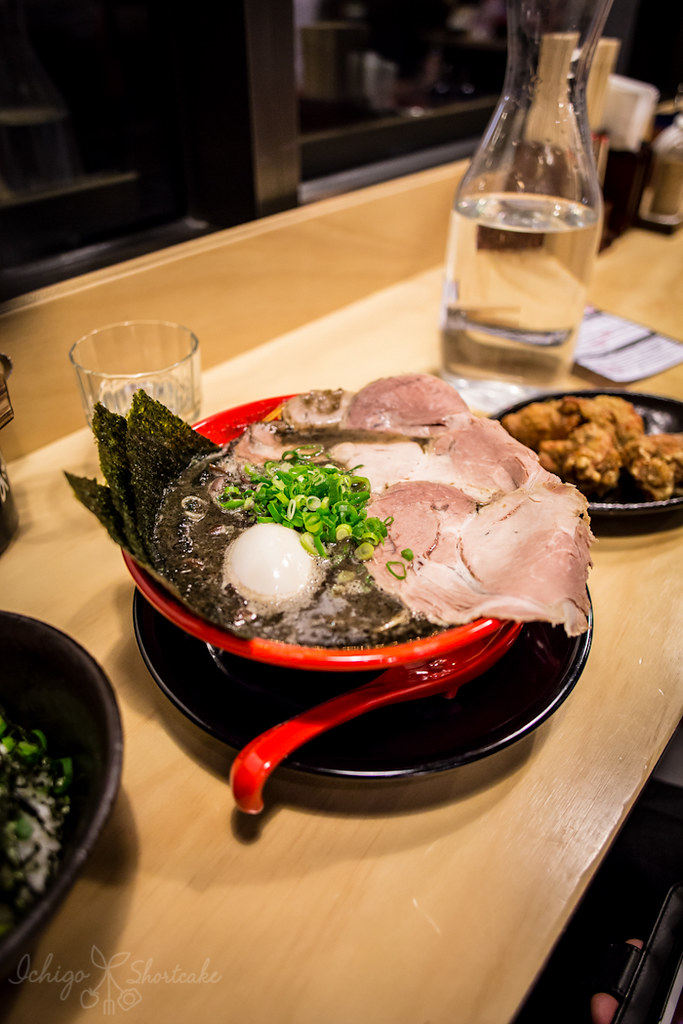 The gyoza (10 for $9) here was tasty but a bit small so not as good value as the karaage. 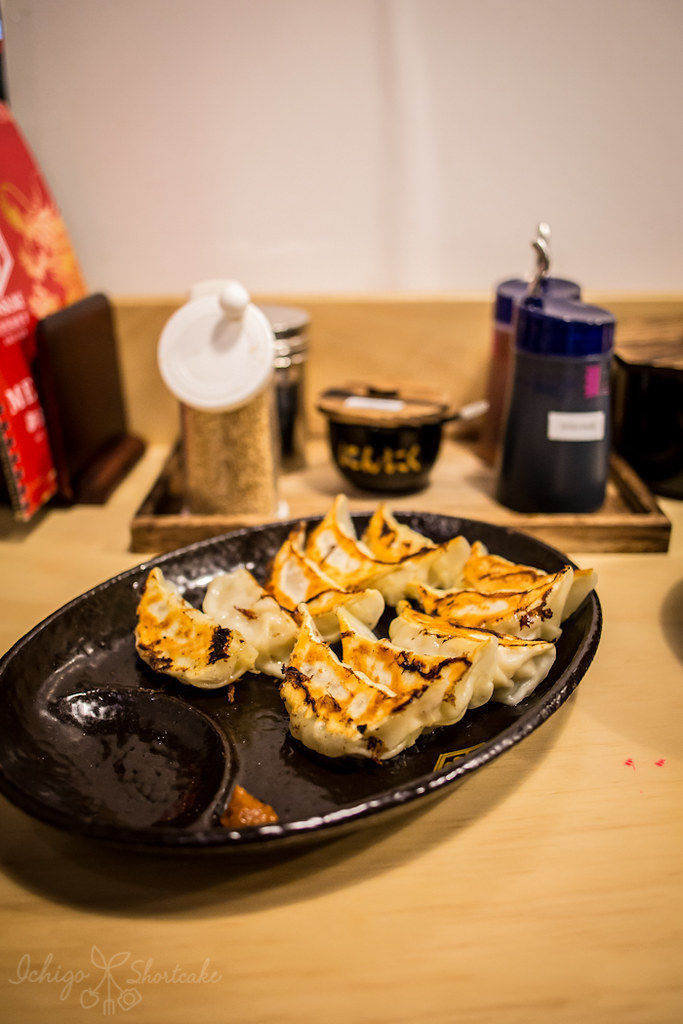 We also ordered a spicy cod roe rice ($5). We shouldn’t have ordered this because this was way too much food to eat and it wasn’t as tasty as I thought. It needed a bit more flavour or a dish to go with it. 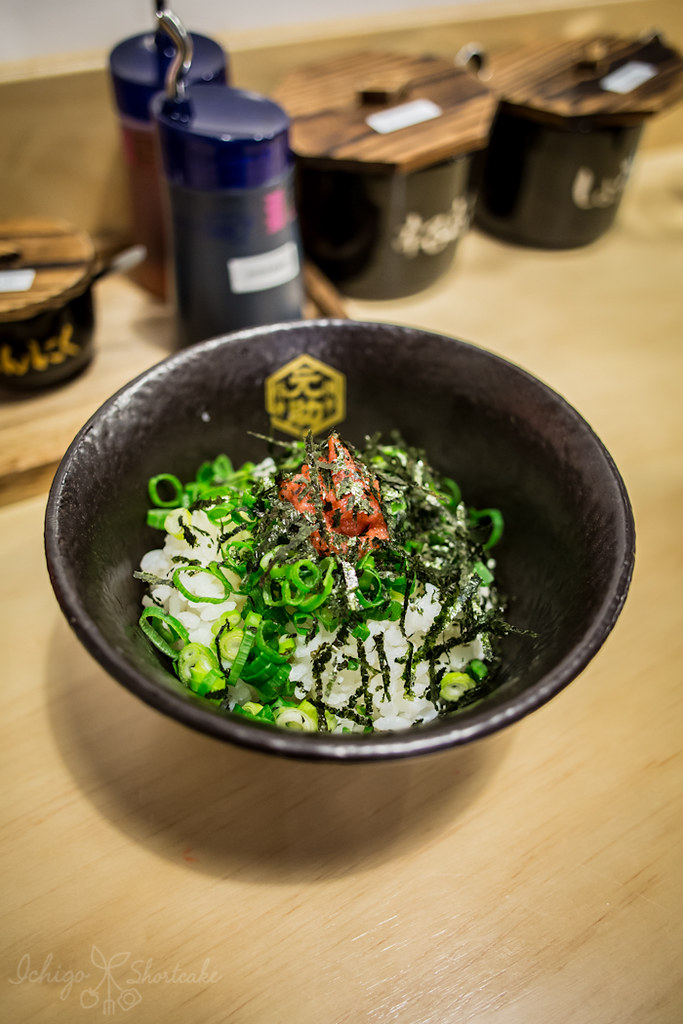 But the egg on the ramen was great both times we’ve been to the Hawthorn store. The second time was even better where the yolk was gooey and perfectly seasoned. The egg shown below was the first time when the yolk was still a bit runny. 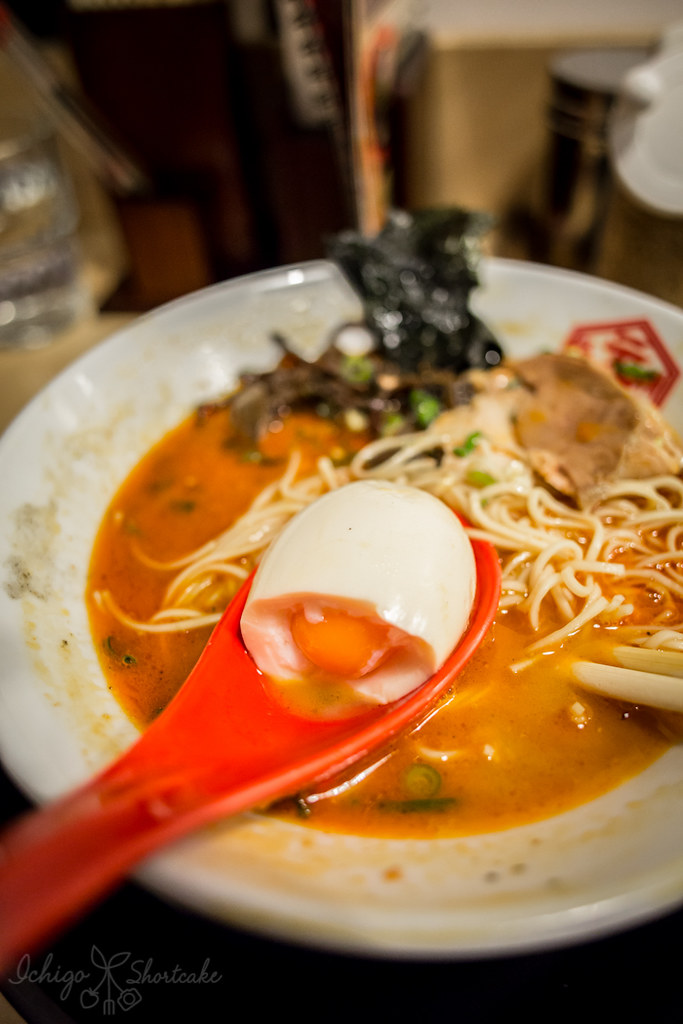 The only downside to Hakata’s ramens is the price. We originally thought it was quite expensive because the base price starts at $13 and only comes with 2 pieces of thin chashu and a bit of black fungus. No egg, no nori and no bamboo. If you want all the added extras, it will be costly.

Some people might not like Hakata due to the expensive price tag but do we think it’s worth it? The answer is definitely yes, that’s why we’ve been back so many times already and that’s why there’s always such a long line outside. If you’re too lazy to line up, you can try their tsukemen instead (or at least make someone else in your group do the honours) or, just like us and everyone else, suck it up and wait in line.