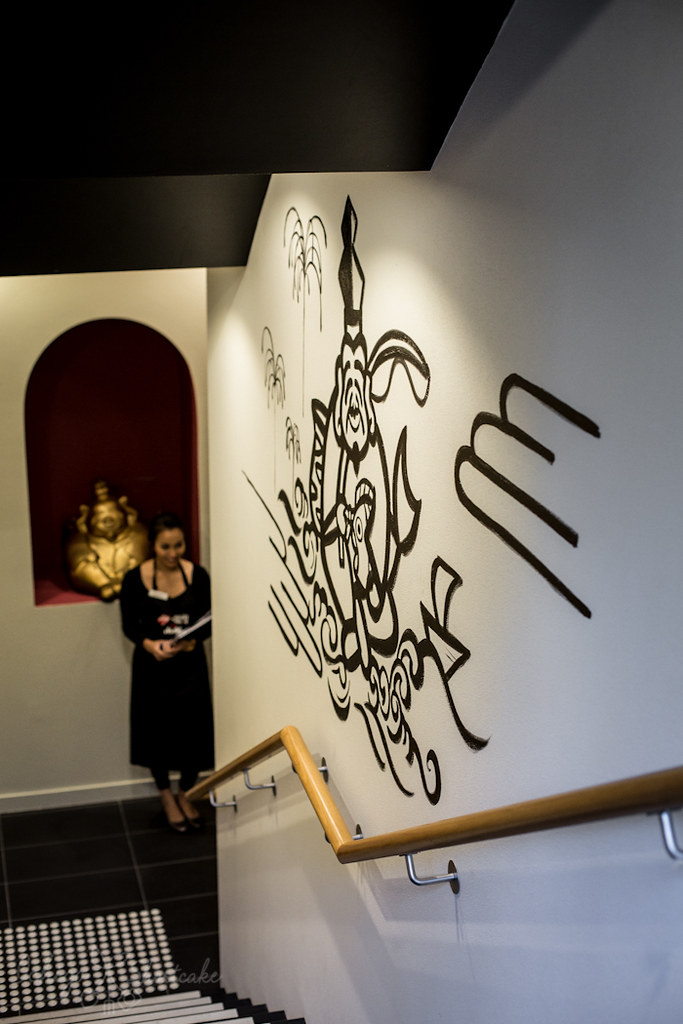 It felt just like yesterday when Melbourne had no good ramen. Now it seems a new ramen joint is opening up every second day! Finally people have caught onto just how hungry we Melbournians are for a good bowl of thick porky soup and springy ramen noodles. 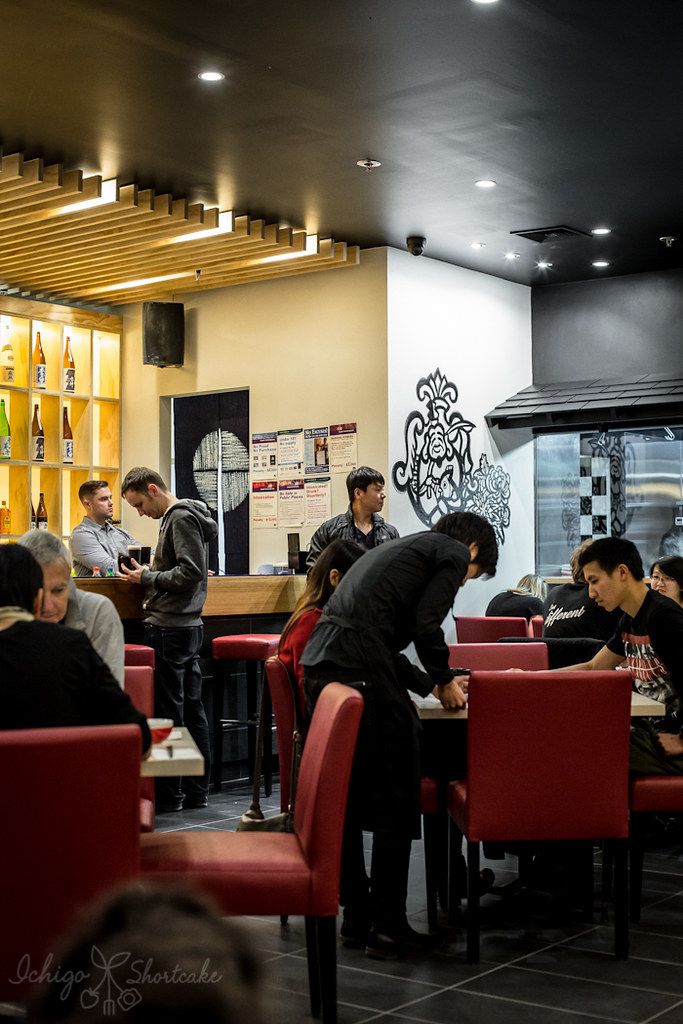 As you’ve guessed, a new ramen restaurant called Ikkoryu just opened its doors to the public yesterday and we were lucky enough to be invited to their soft opening for a first taste of what’s on offer. 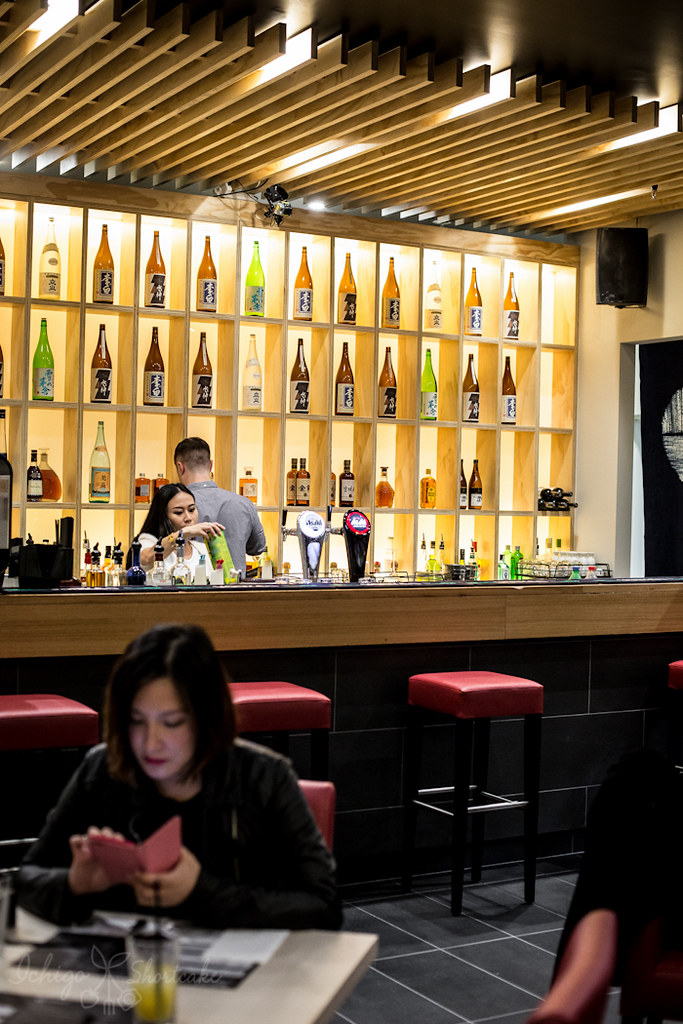 It’s situated on the Flinders St end of Russel Street so you don’t get the usual foot traffic as the restaurants would get in Chinatown. It is also in a basement so without knowing it’s there, you might just miss it. This makes this little hidden gem just that tad classier and possibly less crowded than the usual ramen fare, that is, until the foodies hear about it. 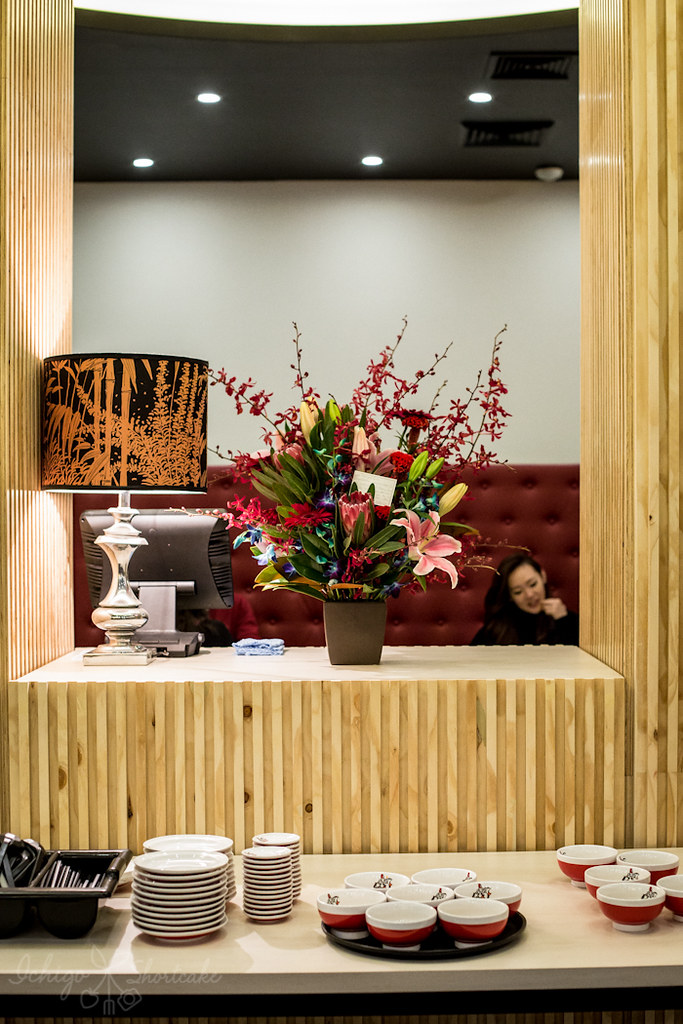 Mind you, the prices are also a few dollars higher too but you will be getting top notch service, a comprehensive wine and sake list and even, get this, a taste of Asahi Black beer on tap, the first place outside of Japan to ever sell it. For those having a party or wanting a quiet business lunch perhaps, you can opt for the private dining room with traditional sliding doors and sit down tables as well. The bar menu was carefully selected by sake master Toshi Maeda, owner of Maedaya Sake and Grill in Richmond whom many of you might be familiar with. Toshi also owns Daiwa Foods where you can purchase your own sake. 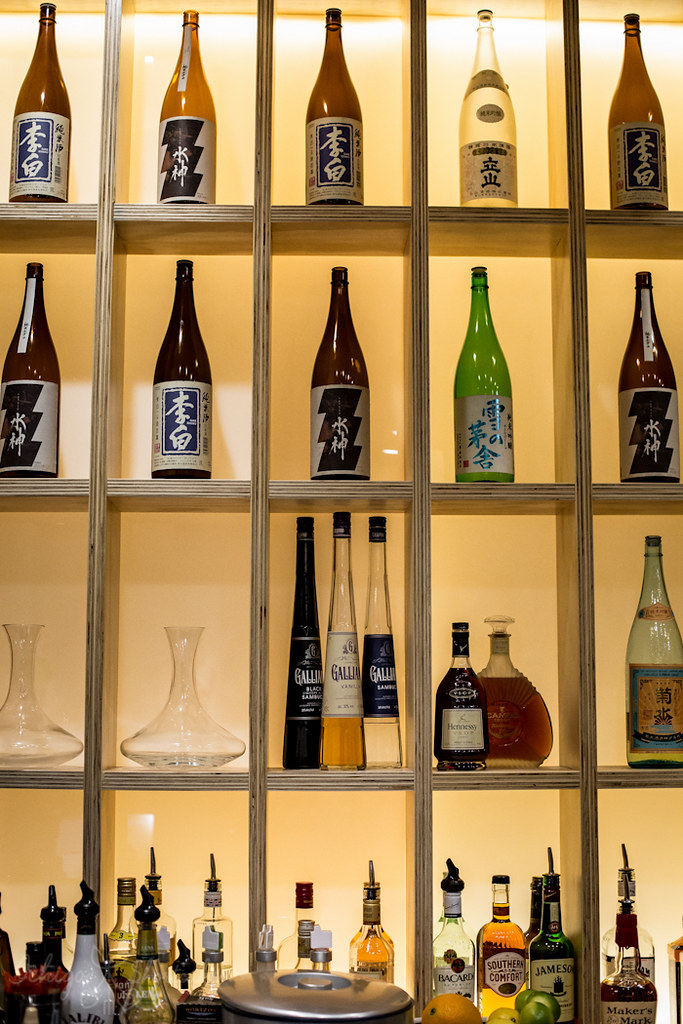 Each guest that night was offered one bite of each side. We first had a taste of the gyoza which were succulent, perfectly cooked and seasoned just right. Just one gyoza though wasn’t quite enough to satisfy that craving.

The fried rice (yakimeshi) was perfect. I love this style of Japanese fried rice as it reminds me of my parents’ cooking. We used to own a Japanese restaurant so he learnt a few things from our chef. It was well seasoned and slightly sweetened by the carrots. 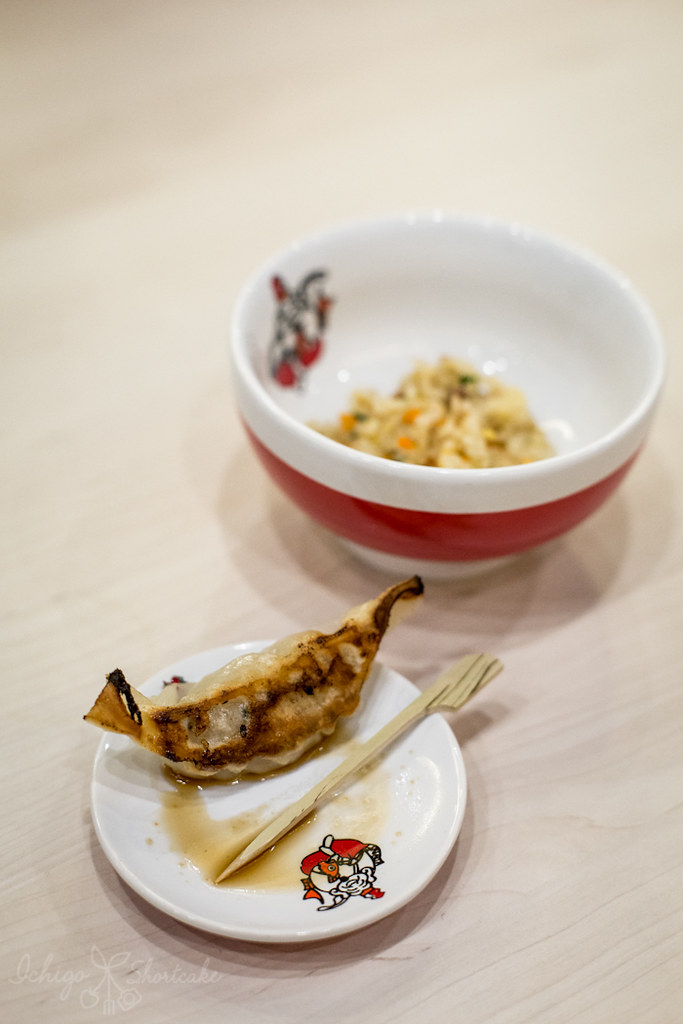 The karaage (fried chicken) was juicy and tasty, although I would have liked salt and pepper on the side or a dipping sauce, wasn’t sure if the usual dish would come with one. We only received one between the two of us though so half a karaage was just enough to salivate me and made me very hungry. 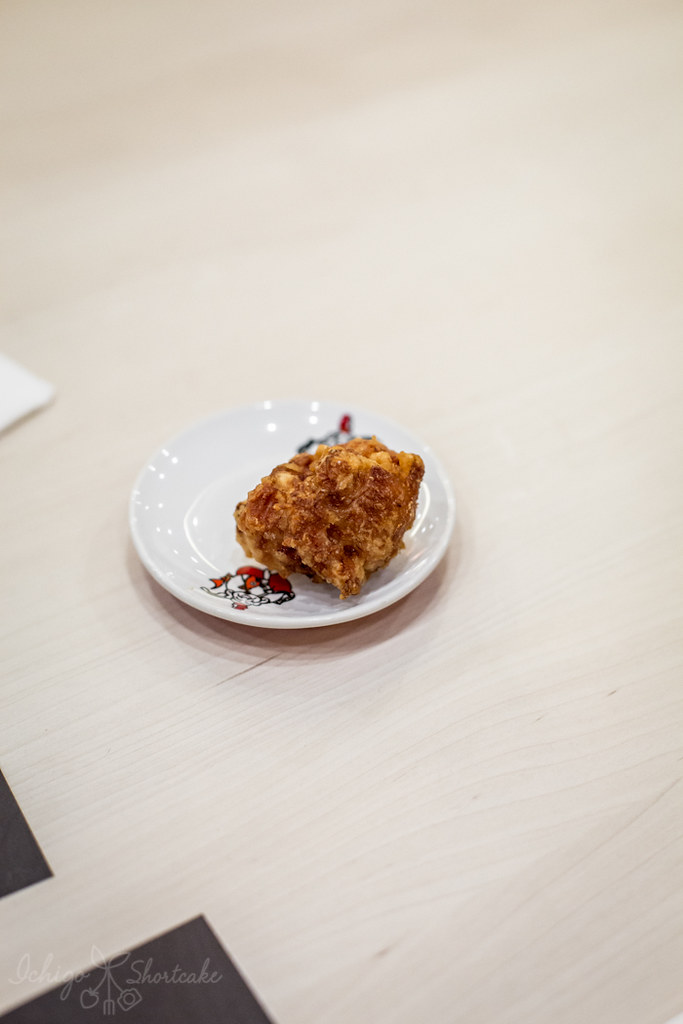 We did try the Asahi Black on tap. It was quite a light style dark beer with a very light smokey taste and moderate sweetness and bitterness. I wouldn’t say it was a great dark beer or even typical of one, but it does pair well with food since it’s not overpowering and it was very easy drinking. For people wanting to start on dark beers, this beer will be an easy transition. 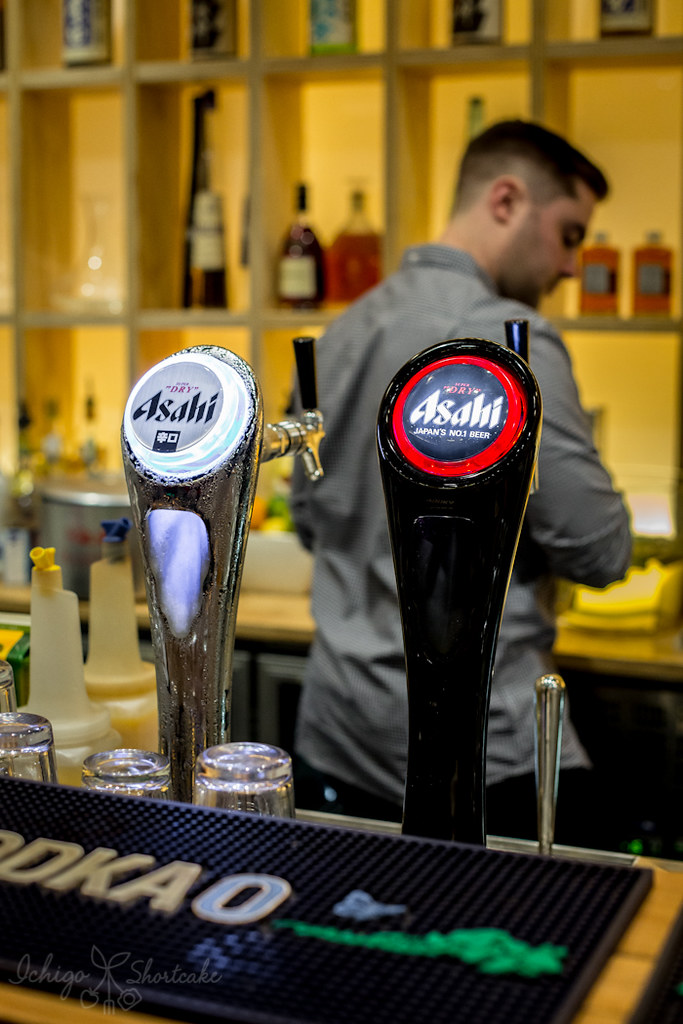 We also tried some of their cocktails which included the orange and apple juices spiced with a bit of sake. 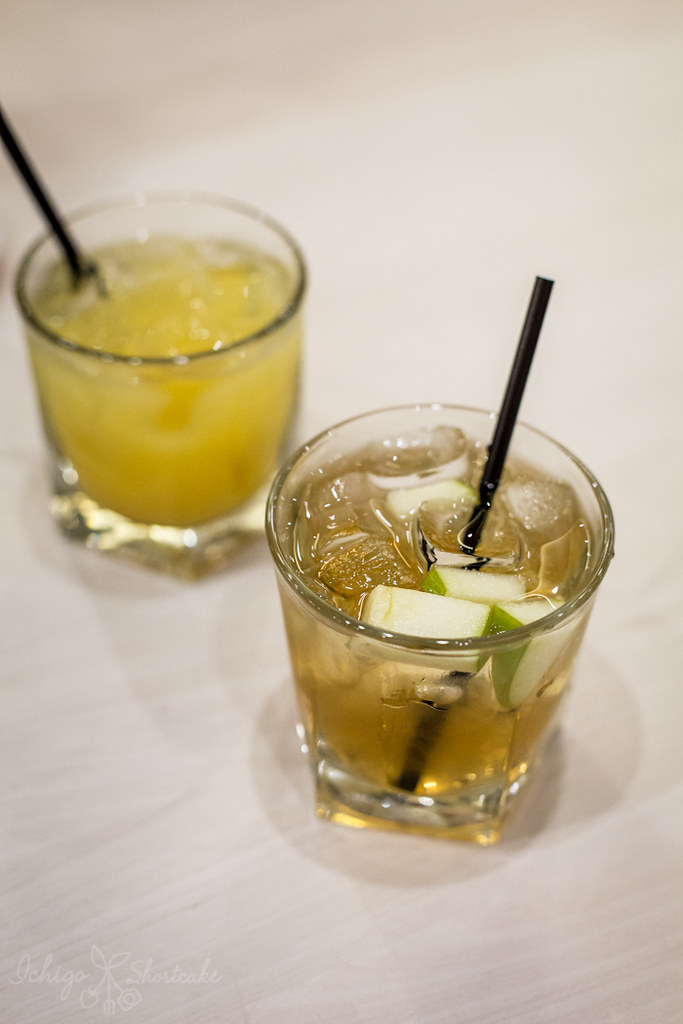 Our highlight though was Yuye’s order (we had to pay for this ourselves – $12) of the Hibiki 12 Year Old whisky by Suntory. It was very strong but quite tasty, a bit too strong for me but then I’m not a whisky drinker. Yuye liked it, although he said he prefers the smokier ones. 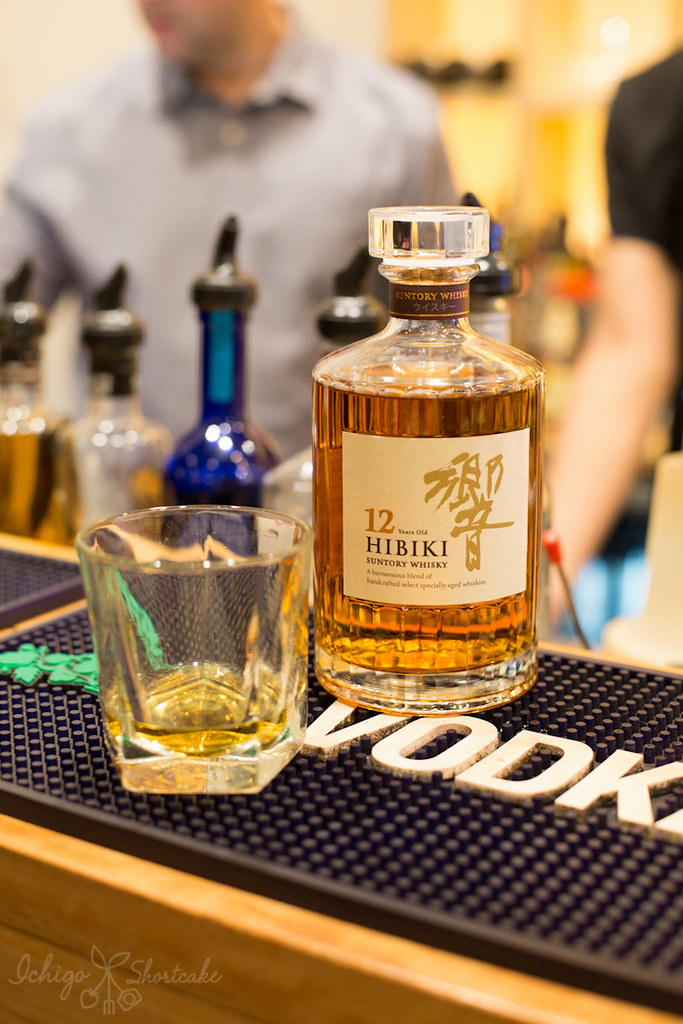 Wasn’t sure why the management decided to only serve ramen at the counter that night which only seated 6 people – rest assured they don’t do this normally. This meant a lot of people (including ourselves) had to wait a long time for our meal. Like many ramen restaurants, you had to first mark on a menu what you want to order – from the soup base to the texture of the noodle and extras. Once the menu was marked, a waiter took our menu and said our number will be called once it’s ready, to which then we were moved to the counter to be served.

Yuye ordered the classic soup base ($15) which came with 2 pieces of delicious pork belly (albeit being a bit thin), seaweed, beanshoots and half an egg. It was a bit strange to see beanshoots on my ramen but it was a refreshing addition to the dish. The soup wasn’t as thick as Hakata and no where near Gumshara’s, but it was bursting with flavour which we loved. Being a tonkotsu soup base though we were expecting slightly thicker soup than what we got. I’m actually not sure if the egg comes with the ramen normally, as it’s not written anywhere on the menu that it is. 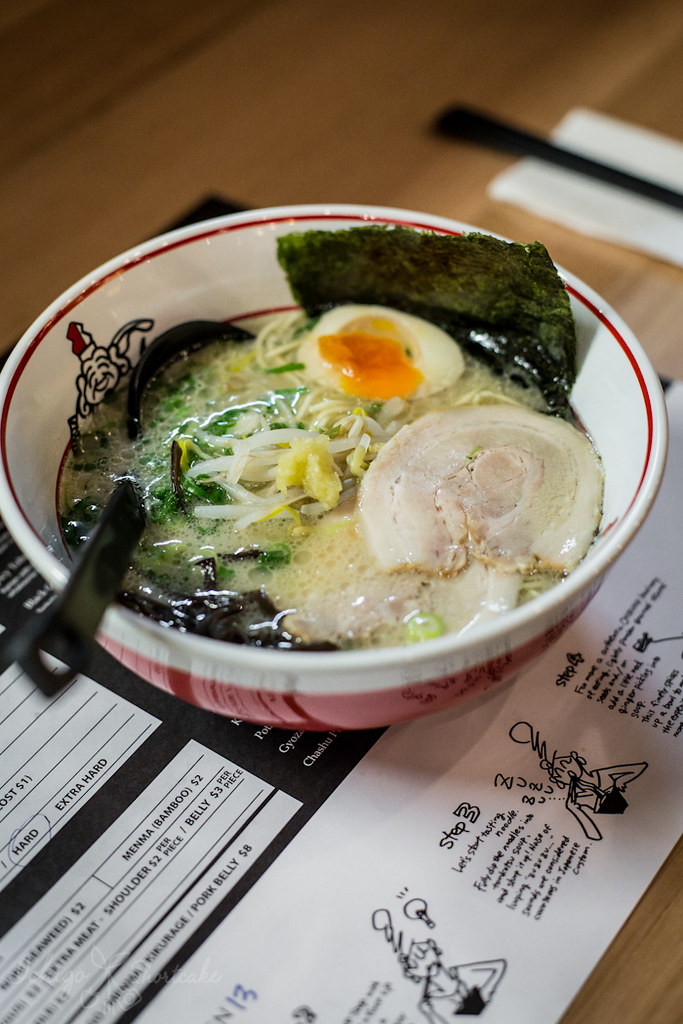 I ordered the Yuzu soup base ($17) with is made with yuzu kosho (citron pepper) so was a little spicy and a little sour. I’m not sure if I quite liked the flavour as much as the regular but it did grow on me in the end. Due to the price difference, I would just order the classic soup base next time. Mine also came with the half egg, seaweed and beanshoots. In hindsight, I really should have ordered the black garlic soup base, I suppose that’s something to look forward to on our next visit. 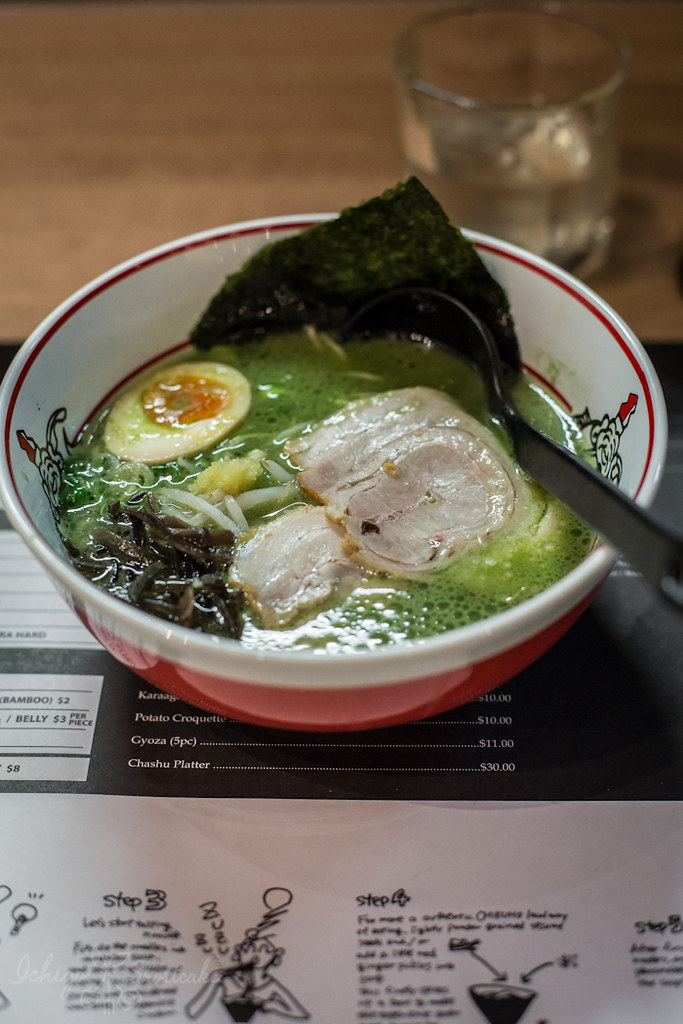 We noted that the soup got a little salty towards the end, perhaps this was because we chose ‘normal’ in the soy sauce category. Maybe the light version wouldn’t be as salty.

The eggs were cooked perfectly. It was marinated and the yolk was soft and gooey, just like a good ramen egg should be. We think the egg forms the heart and soul of the ramen and is just as important as the soup and noodles so we were happy it was done well. 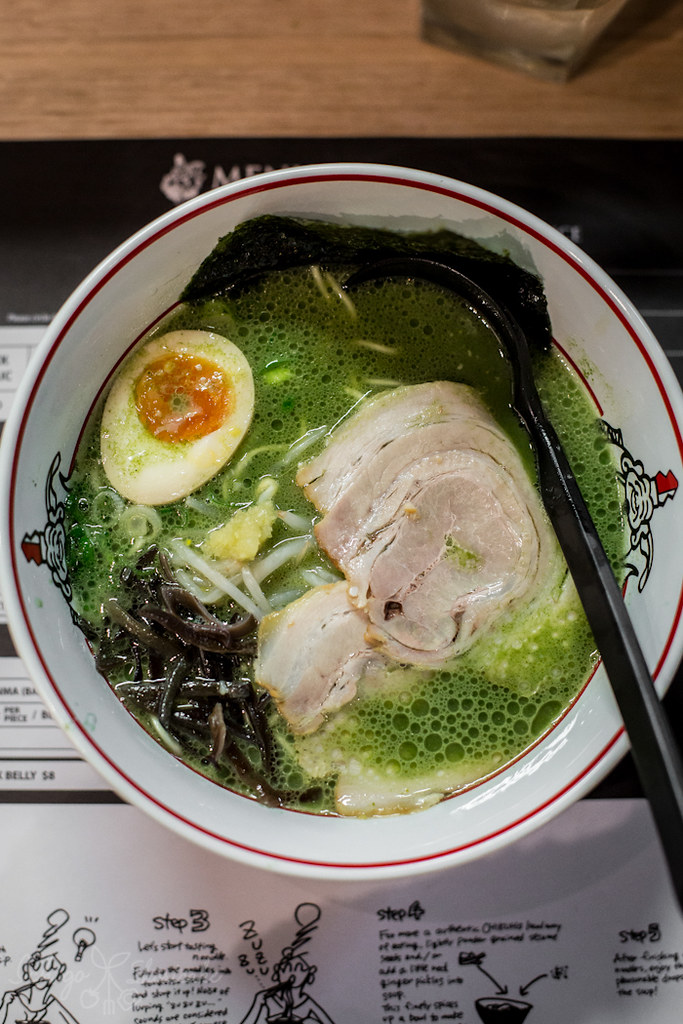 Overall, we did enjoy the food at Ikkoryu Fukuoka Ramen. It’s definitely a welcomed addition to the growing ramen culture we already have here. It offers something a little more classy for those of you who don’t like to squash and eat like you would fast food and like to pair your ramen with a good beer or sake. That is if you’re willing to pay a few extra bucks for that luxury. Although the soup wasn’t as thick as we liked, it was still full of flavour. As it was a soft opening and they were still finding their feet, some minor hiccups can be forgiven. I will be back a while later to see how they have fine tuned their food.