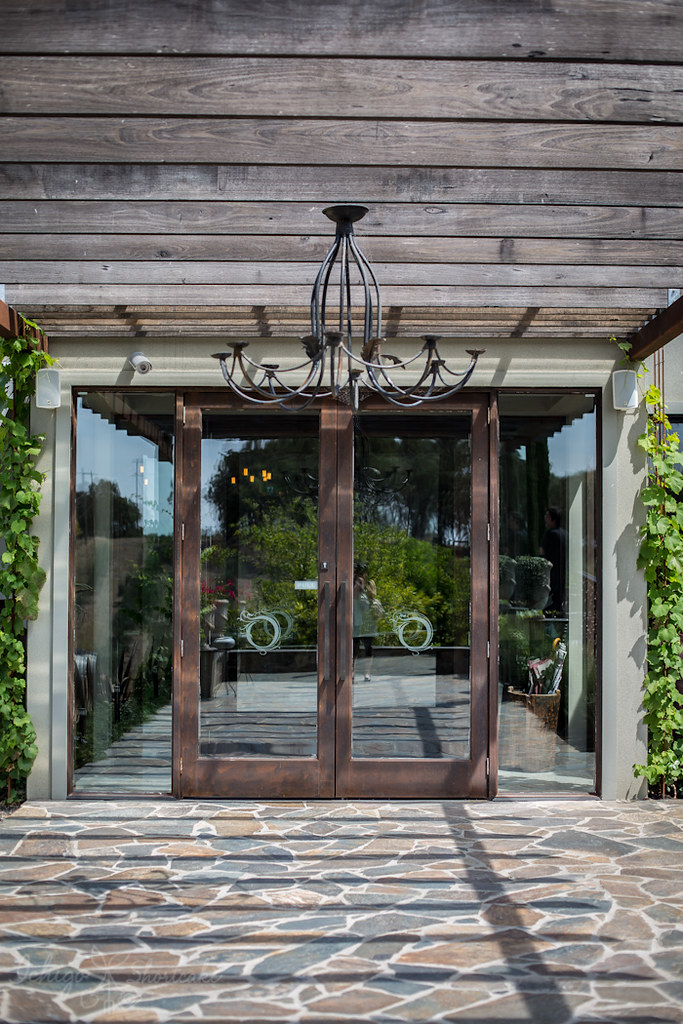 Have you ever gone exploring in your neighbourhood randomly only to find a hidden gem? I have. Well, It’s not the most local to me but 10-15 minutes drive is close enough for me. 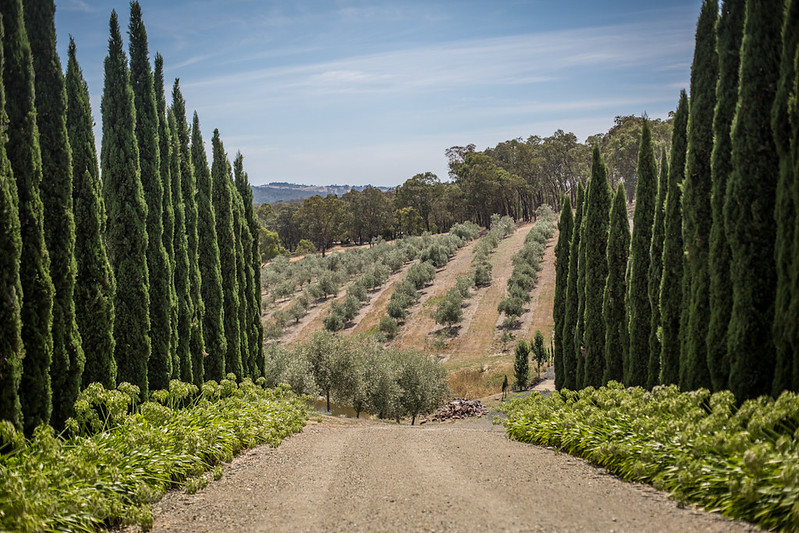 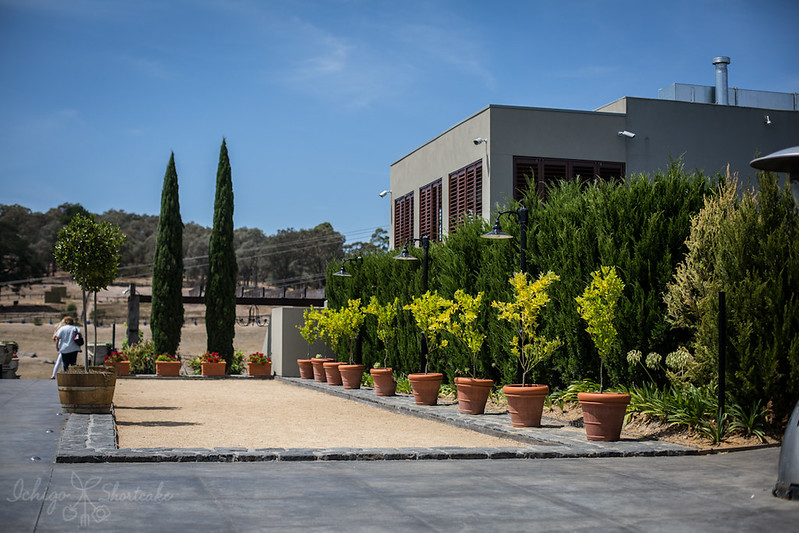 Yuye and I were on our way home from the wedding venue (Potters) which is about 15 minutes north of Doncaster East. That side of town is very serene with rolling hills and tall gum trees, as if we’re out in the countryside even though it’s really not far from the suburbs. It’s no wonder though as it’s very close to the Yarra Valley and in fact have a few wineries of its own. 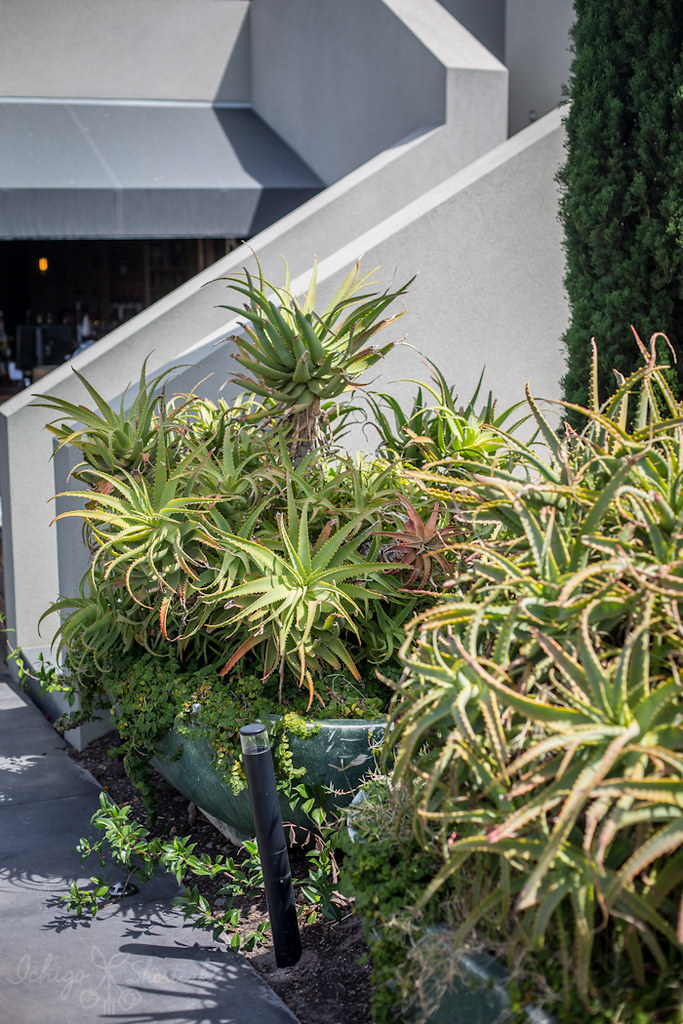 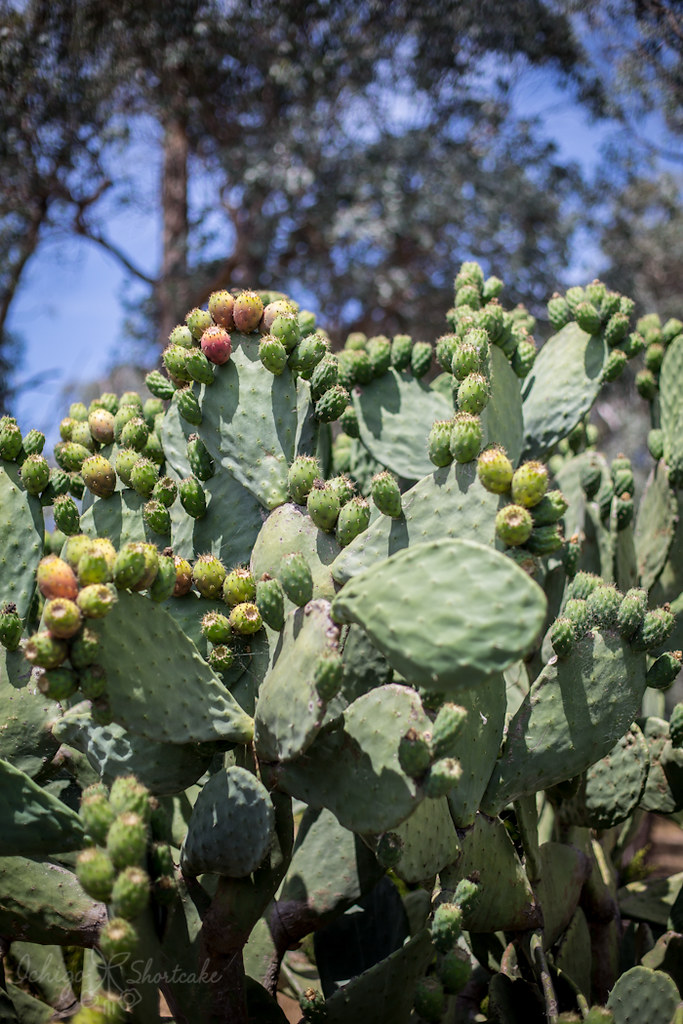 Olivigna was one of those wineries and restaurants. We didn’t know it existed, nor did we plan to have lunch there but a sudden compelling idea to make a left turn brought us to the Tuscan setting that is Olivigna’s front entrance. 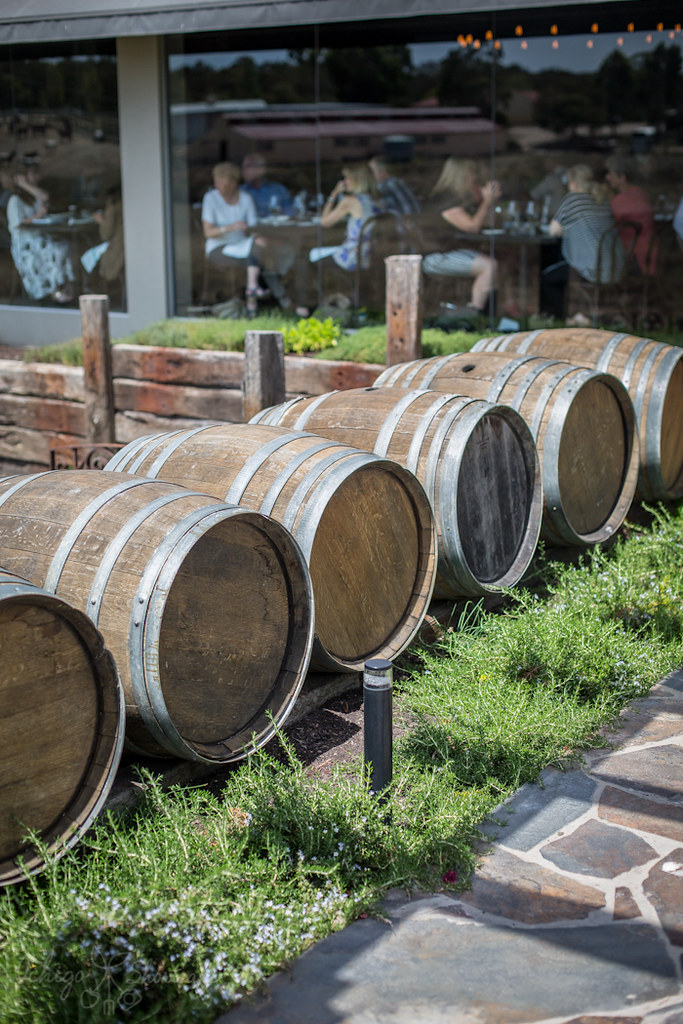 When we parked I didn’t think much, just that it was another winery, but as we walked closer, I felt as though I may have been in Italy. The architecture and plants were well placed to give that serene feel which really put me in a good mood. It was actually a beautiful place for a little stroll out in the sun. 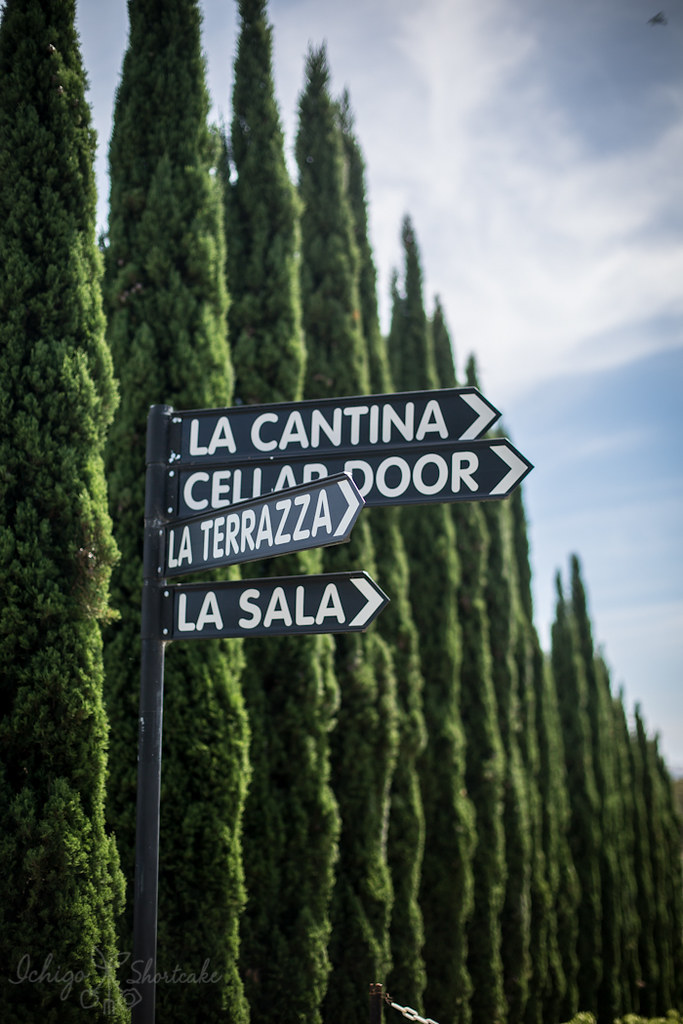 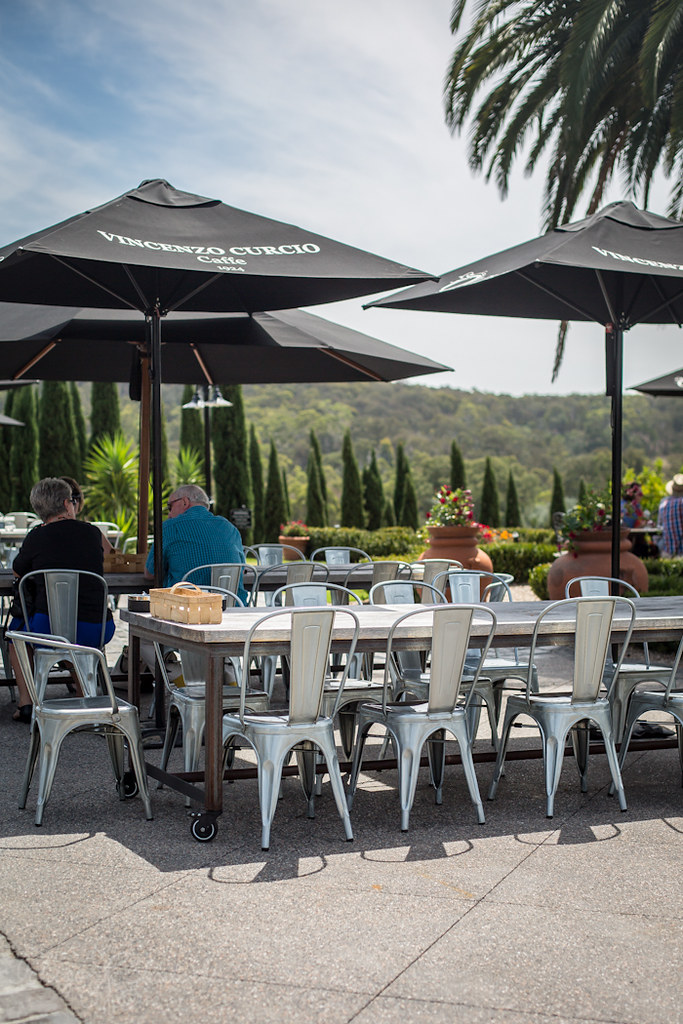 As we entered the restaurant, we were greeted by a lovely waiter who brought us to a free table almost directly in front of the pasta bench. 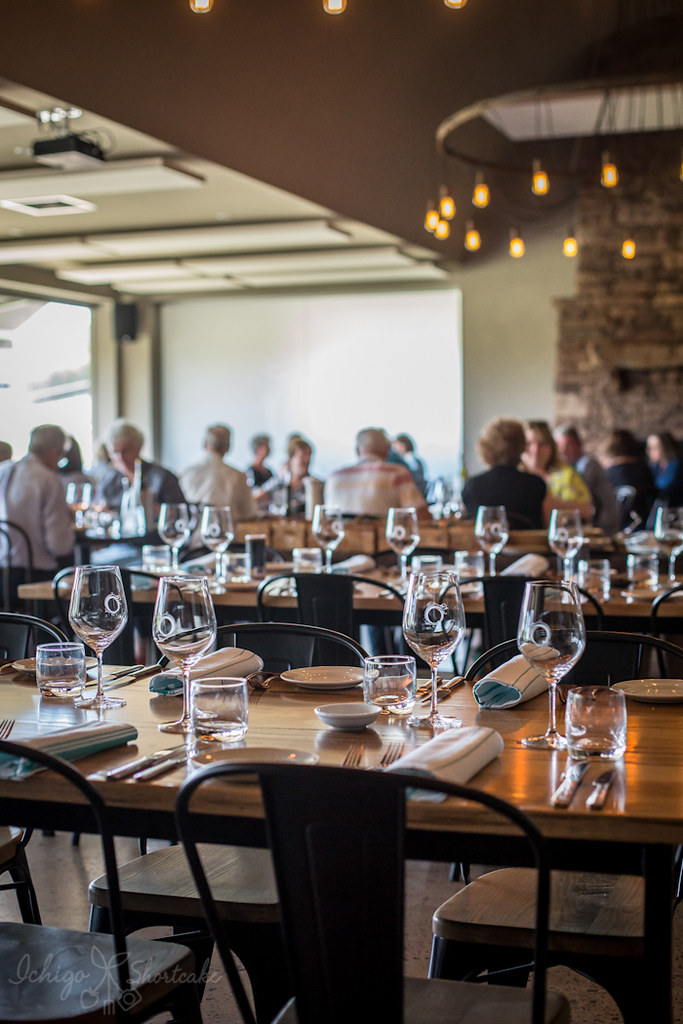 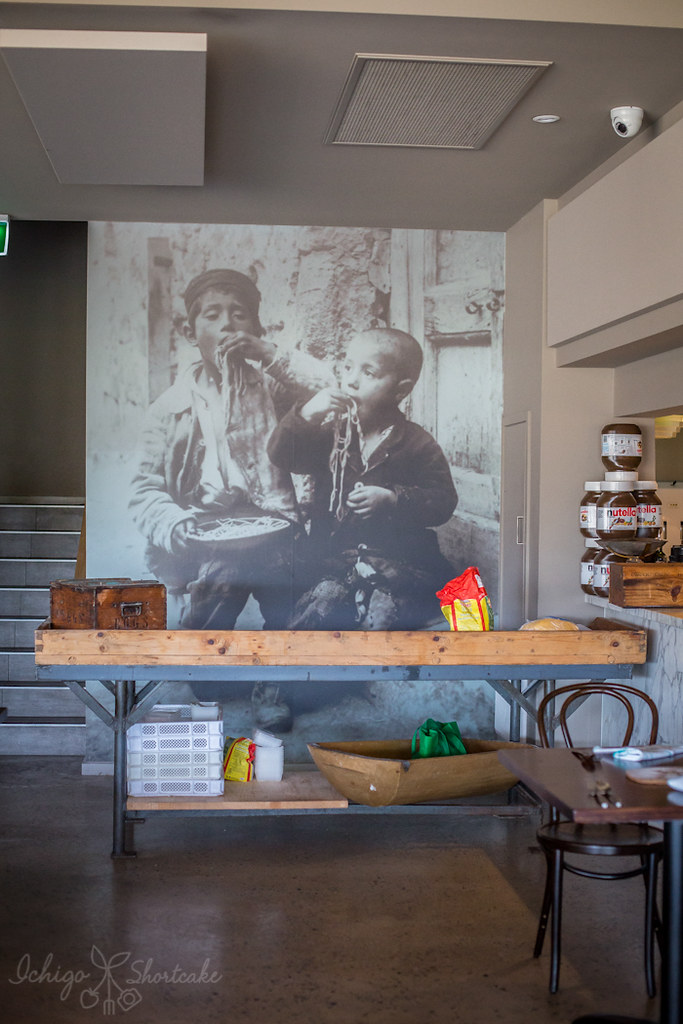 I adored the pasta bench, especially when the Italian lady began preparing her doughs. This is like how they do it  in Chinese restaurants with dumpling making but on a more romantic and fascinating scale (since I’ve seen plenty of dumpling making before). 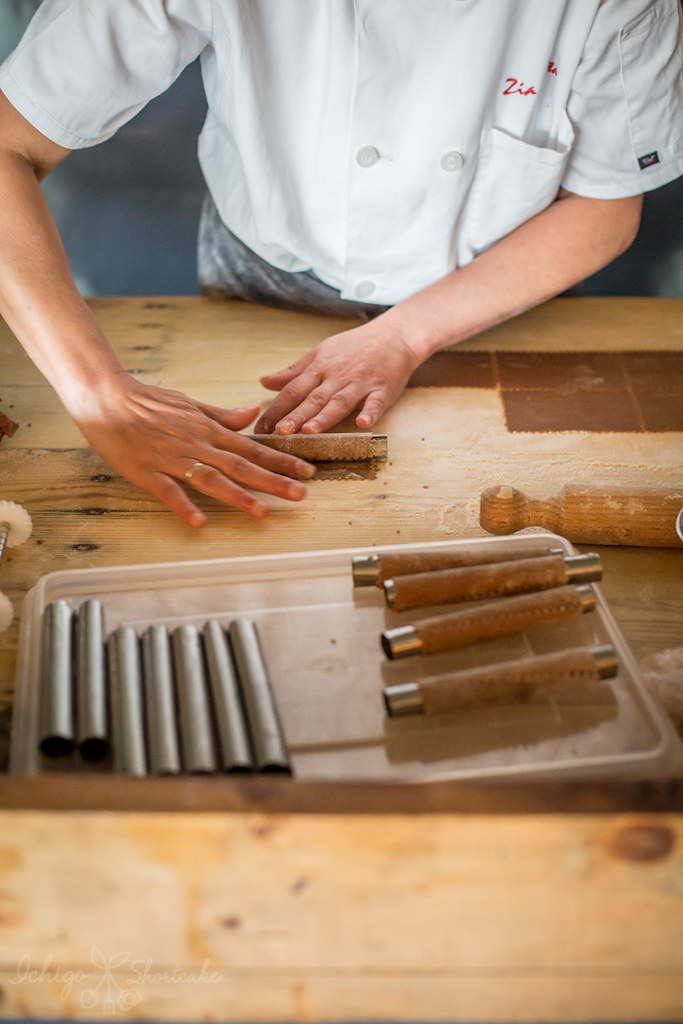 She made fresh fettuccine and other pastas along with fresh cannoli dough.

The barrel room I believe is for private dining but its doors were open so I sneaked in to take a few photos. Such a lovely space isn’t it? 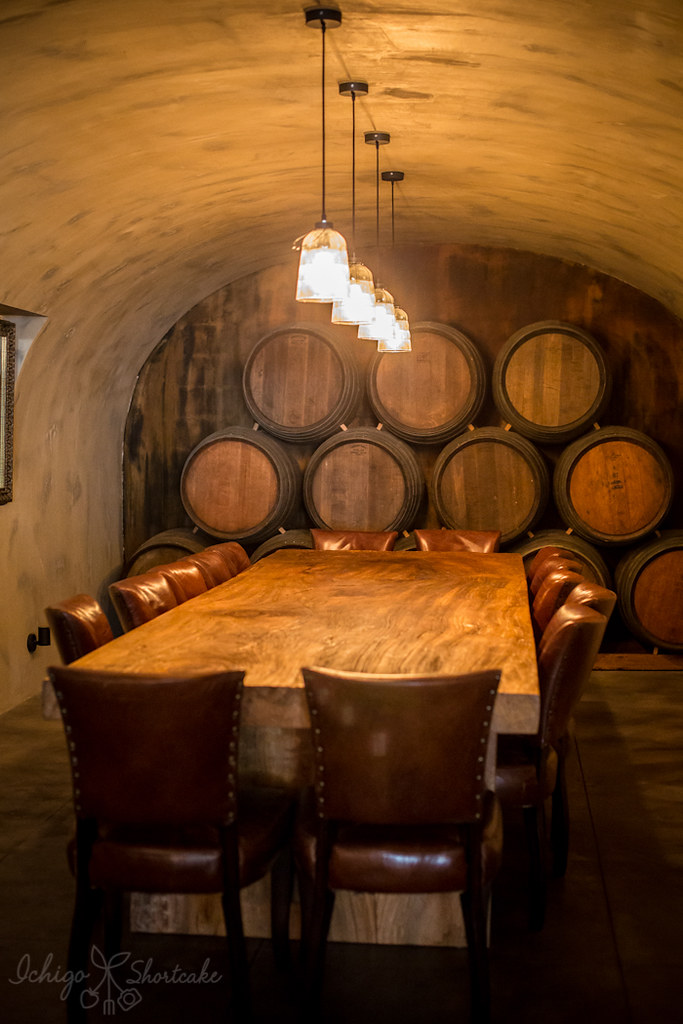 Fresh pizzas were being pumped out from the pizza oven right next to us as well that I hardly had time to take in my surroundings, including the produce that they sell (they have their own olive grove and thus olive oils and marinated olives and of course wines) and the bar. 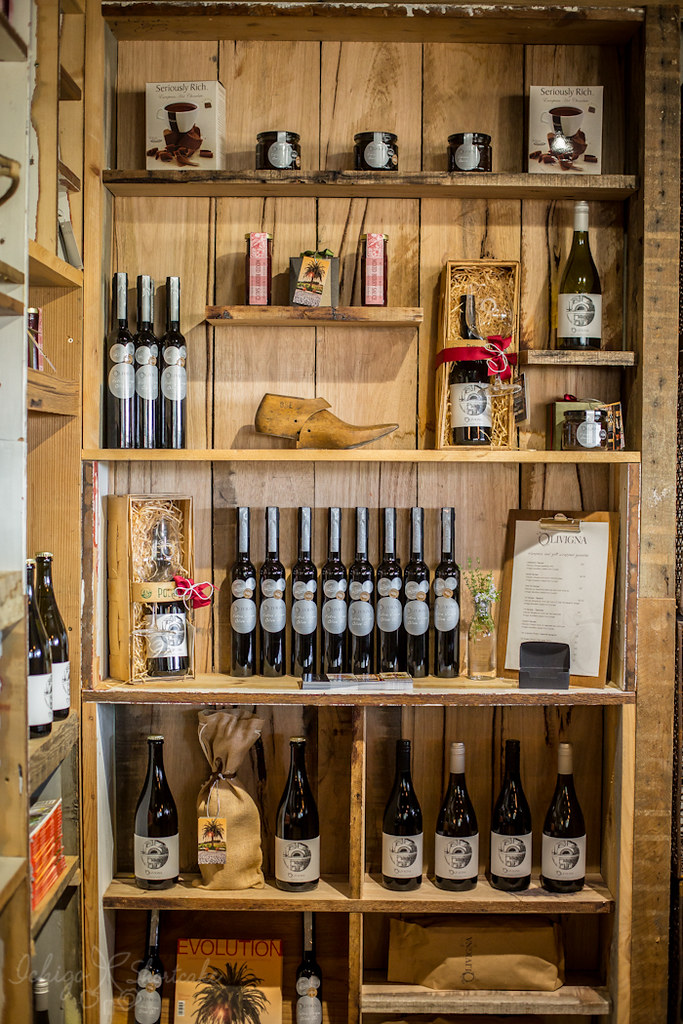 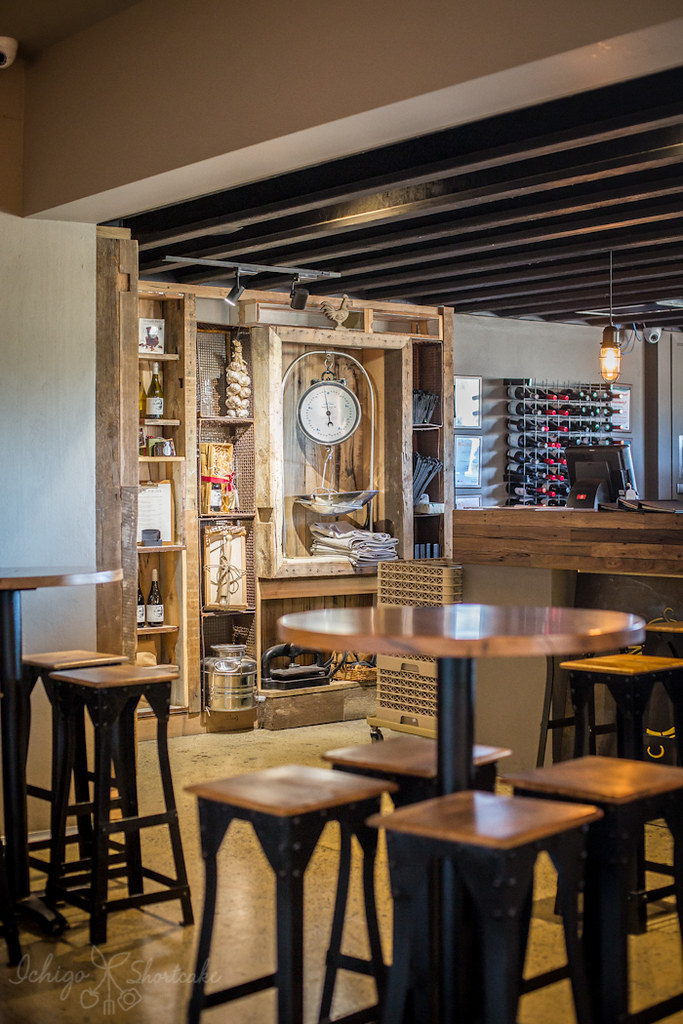 The tantalising smell of fresh pizza had me salivating and I was oh so very hungry. 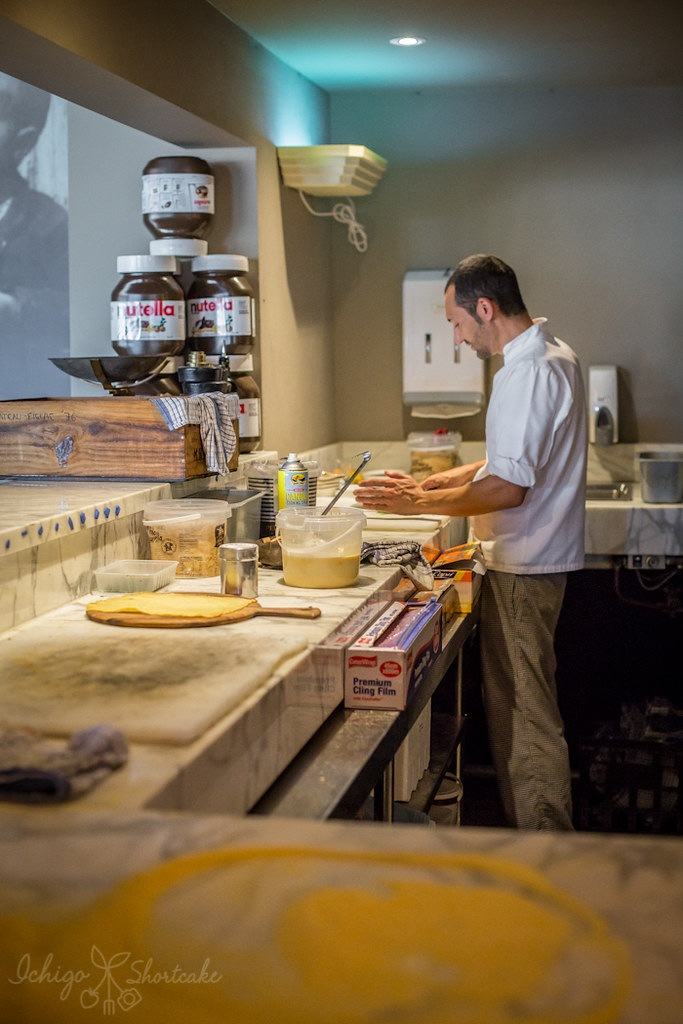 The free sourdough bread was very rustic and tasty, along with the house made olive oil, we were already quite satisfied. 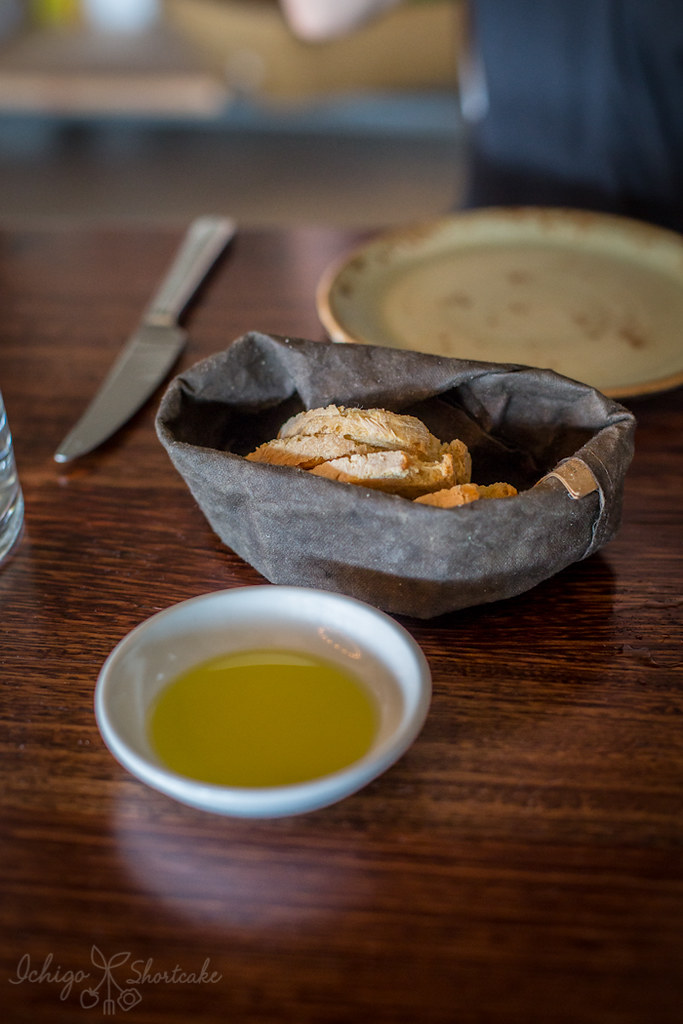 We decided to order an antipasto board to start. It had a mix of different meats and bread along with some olives, zucchini and roast peppers. There wasn’t much cheese on it though which was a shame but was still a good start to the meal. 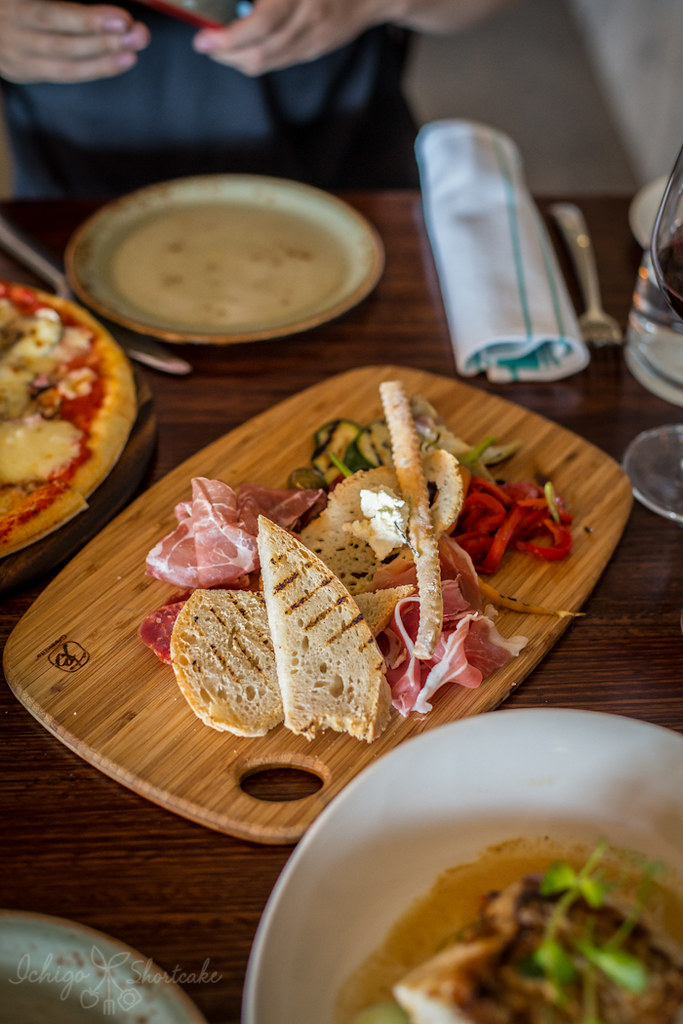 Yuye decided to order the Paesana which had pomodoro (tomato sauce), free range ham, porcini mushrooms, Olivigna olives, anchovies and fiore di latte (mozarella cheese) ($22.50). There wasn’t a huge amount of topping on top but what was there was just right. We both loved the pizza base which was thin but not soggy and was a perfect blend of flavours and seasoning. It was a simple yet well executed dish. 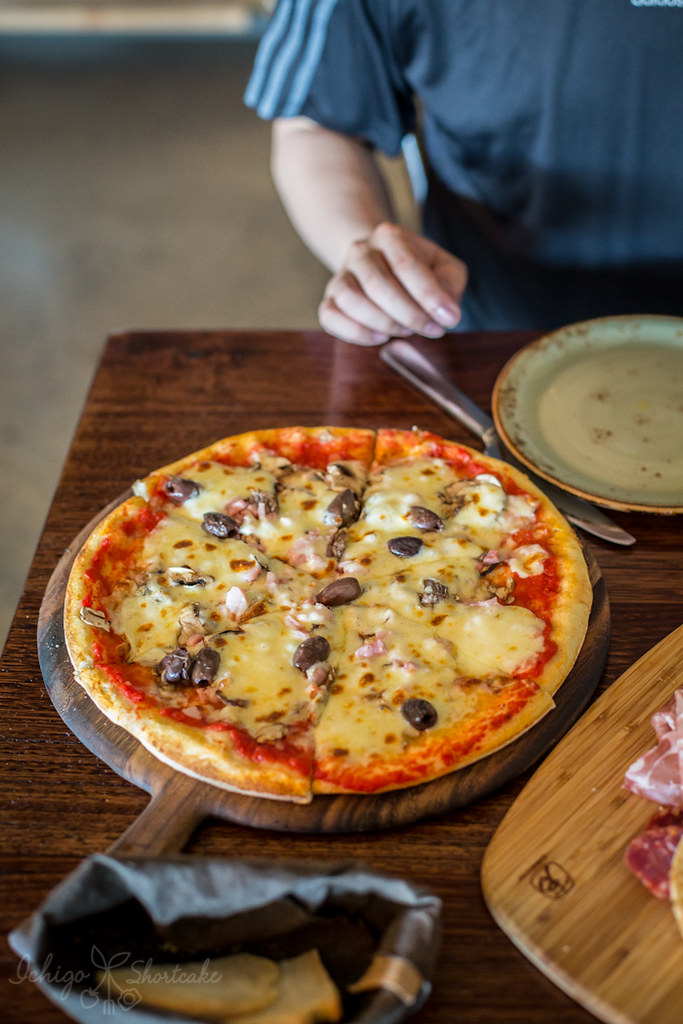 I should really have ordered a pasta since I knew fresh pasta dough was being made, but as it was a hot day, I just couldn’t go past the Pesce (fish) dish. As Olivigna serves a seasonal menu, this fish has now changed to a salmon, but at the time it was crispy skinned fillet of snapper, scampi saffron sauce, warm salad of kipfler potatoes, tomatoes, leek and chive ($34). 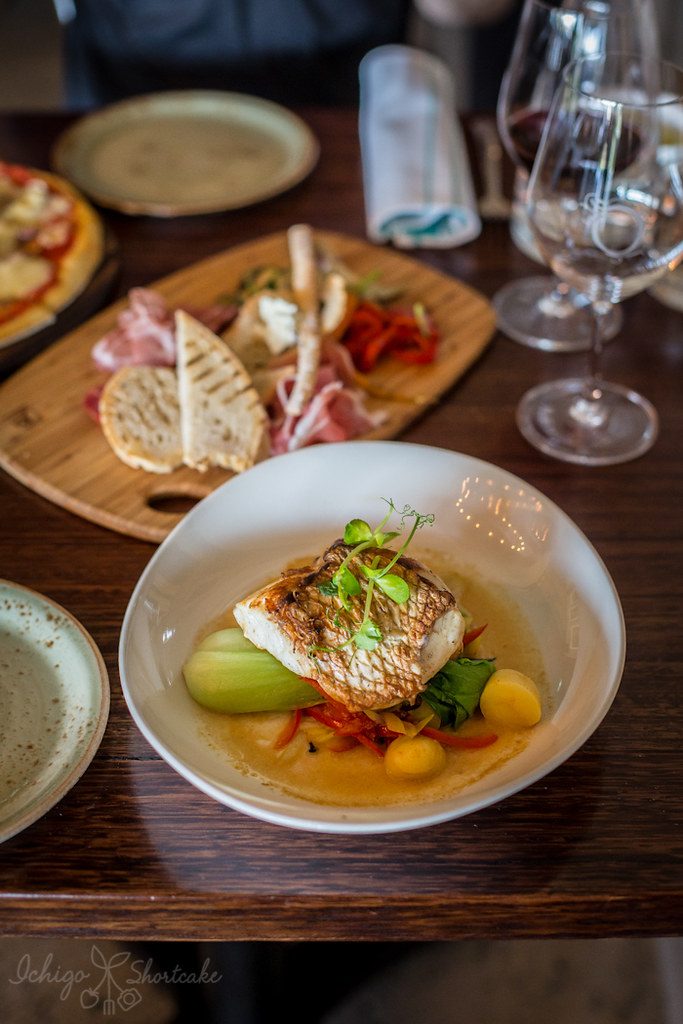 The skin on the fish was perfectly cooked, crunchy, not soggy and tasty. The fish itself was very moist and cooked just right. Along with the sauce and veggies, I thoroughly enjoyed it. So I didn’t regret my choice of not ordering pasta.

Yuye paired his meal with an Olivigna red. 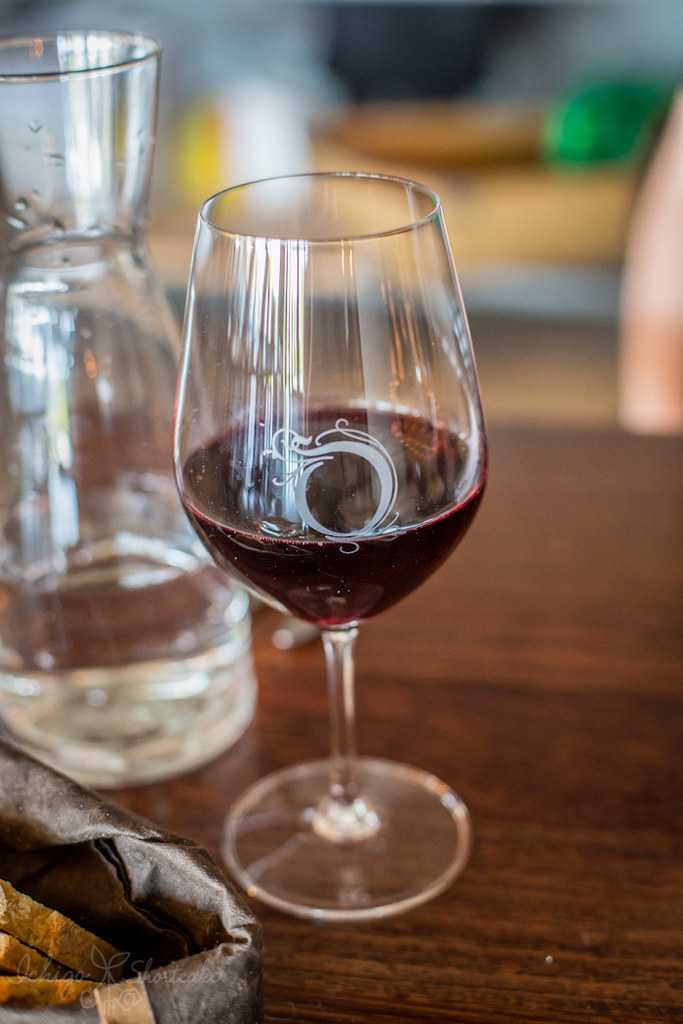 As I was watching the Italian lady making cannoli dough the whole time, I just couldn’t help myself but order one. The Olivigna Cannoli ($15) came with two cannoli fill with citrus ricotta. Truth be told, I thought it wasn’t all that value for money. It was a good cannoli with a crispy outer shell that reflected well on the homemade dough but they were effectly $7.50 each cannoli. They weren’t all that big either. I think next time I will try one of their other desserts. 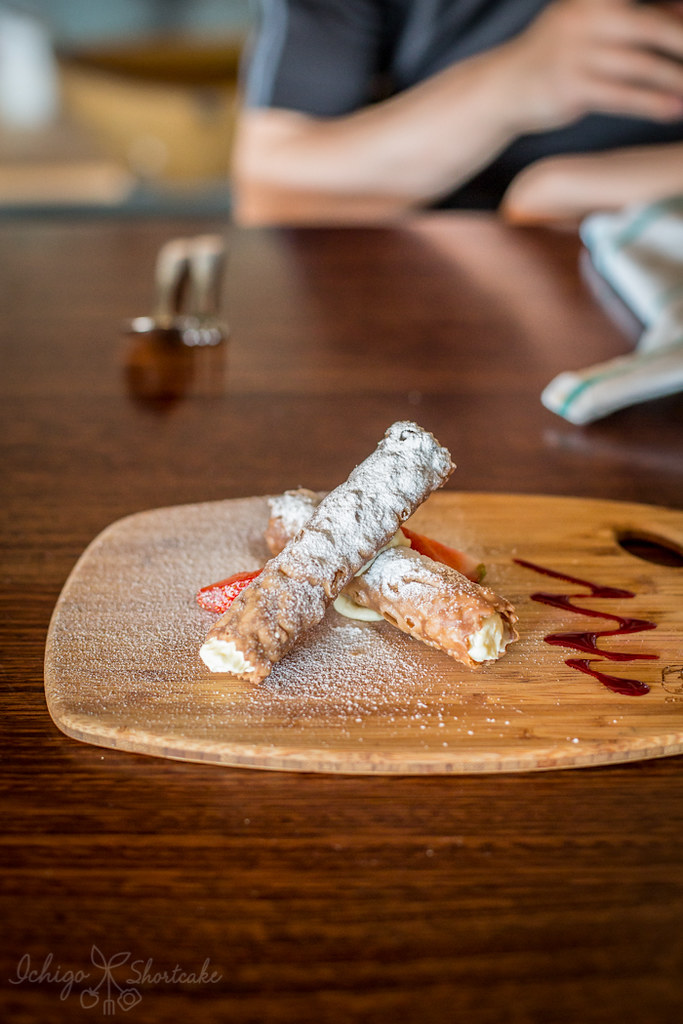 Overall we had a lovely time. The atmosphere was fantastic, the decor true to its original and the service was great too. Olivigna does authentic and tasty Italian meals paired with their own wines and olive oil. What more can you ask for? They also do weddings and events which I thought would have made a lovely reception venue. Some dishes might be a tad expensive but in the end well worth it.