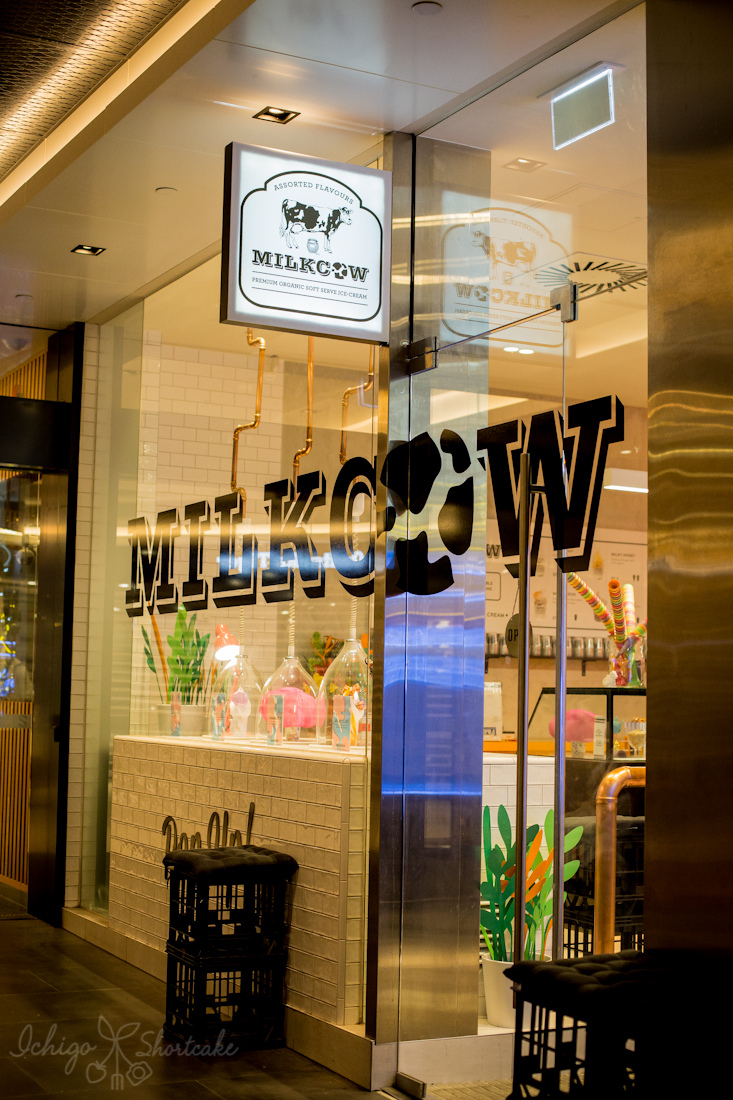 If you travel to Asia often you might already be familiar with the famous Korean chain Milkcow. They have in excess of 60 stores around the world (mostly in Asia) and now it has finally arrived on our doorsteps! 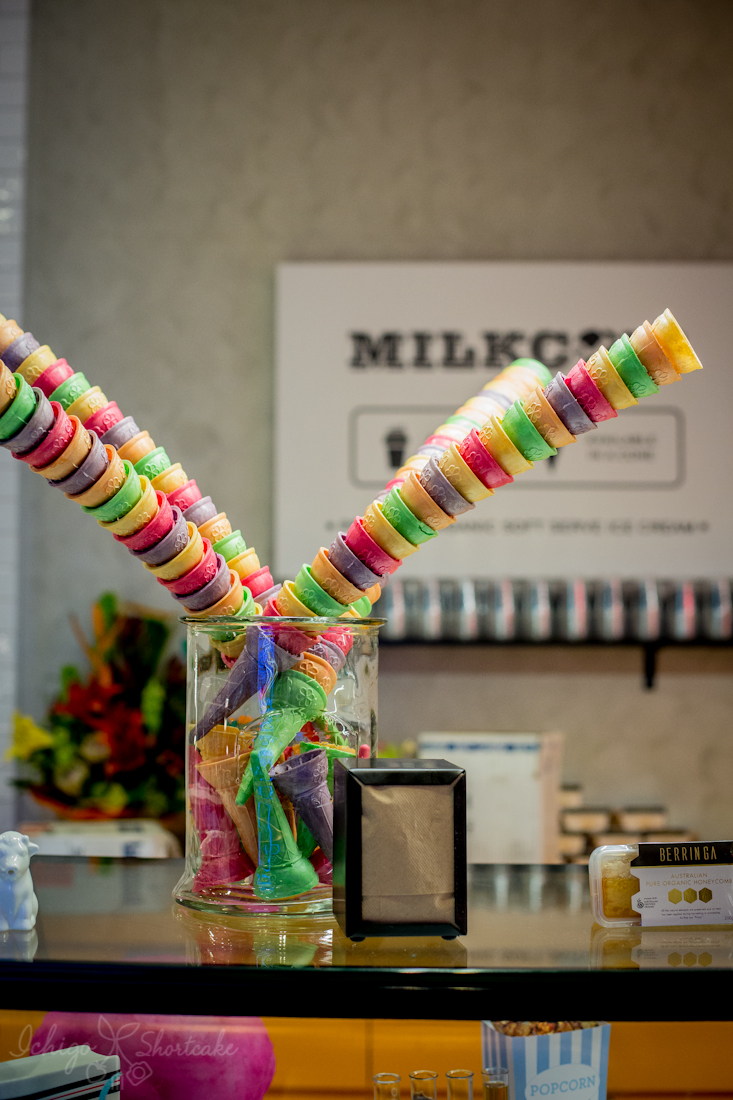 With a chic and vibrant decor, a focus on premium organic produce and delicious soft serves, the Milkcow popup in The Strand (opposite H&M) in the CBD has already gained a following since its opening more than a week ago. The soft serves are made with 100% organic Aussie milk and all other ingredients have been thoughtfully sourced locally and internationally with the highest quality in mind. 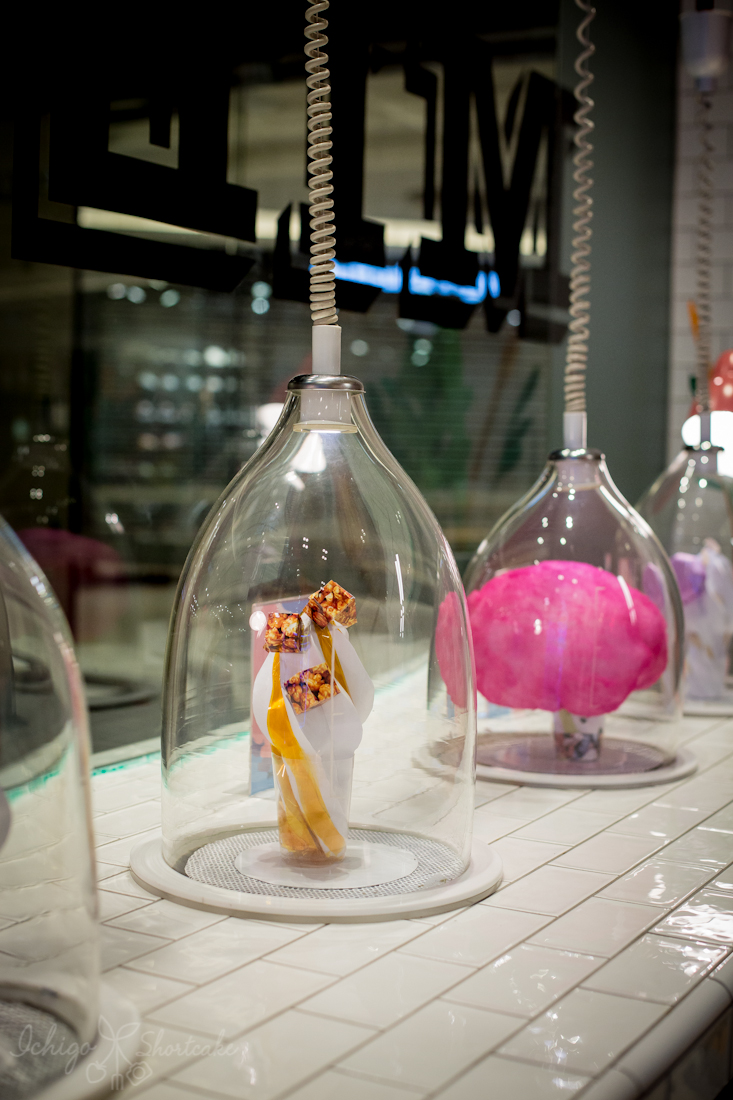 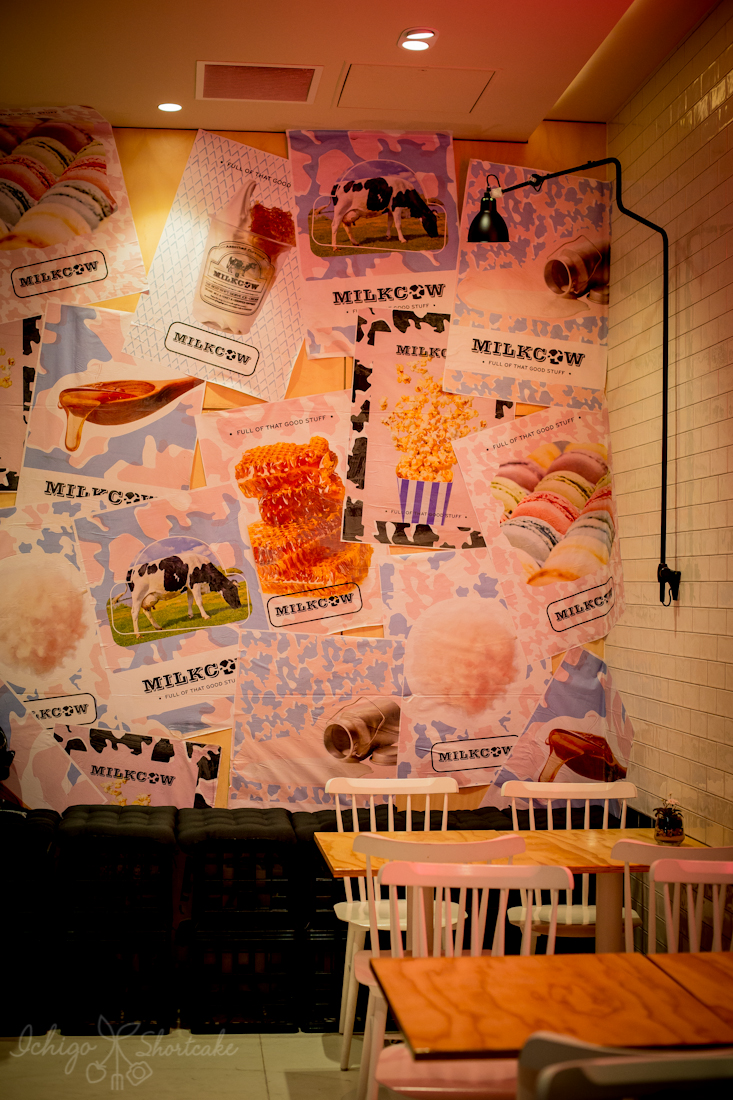 I was a bit skeptical at first since it’s just soft serve, how good can it be right? But when I laid eyes on the pretty white fluffy cups, I just couldn’t resist.

There are a total of 12 types that you can choose from. When you’re a glutton like me, it’s very difficult to choose which flavours to go for. So, we decided to share 5 cups between the 4 of us. I know you’re rolling your eyes but we finished all of them! 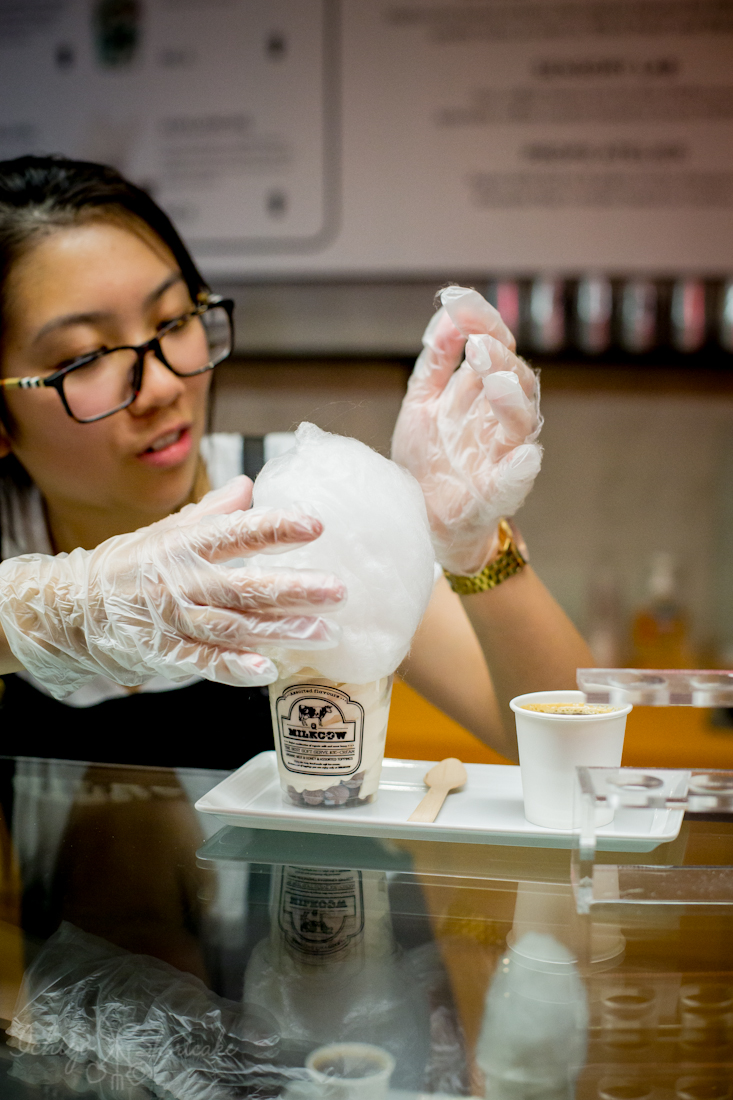 Of course we had to get the signature Milky Honey. The organic honey and honeycomb is sourced from Berringa, a premium honey producer in Australia. It went very well with the creamy soft serve. If you haven’t tried real honeycomb before, you really should, it has a very unique texture. 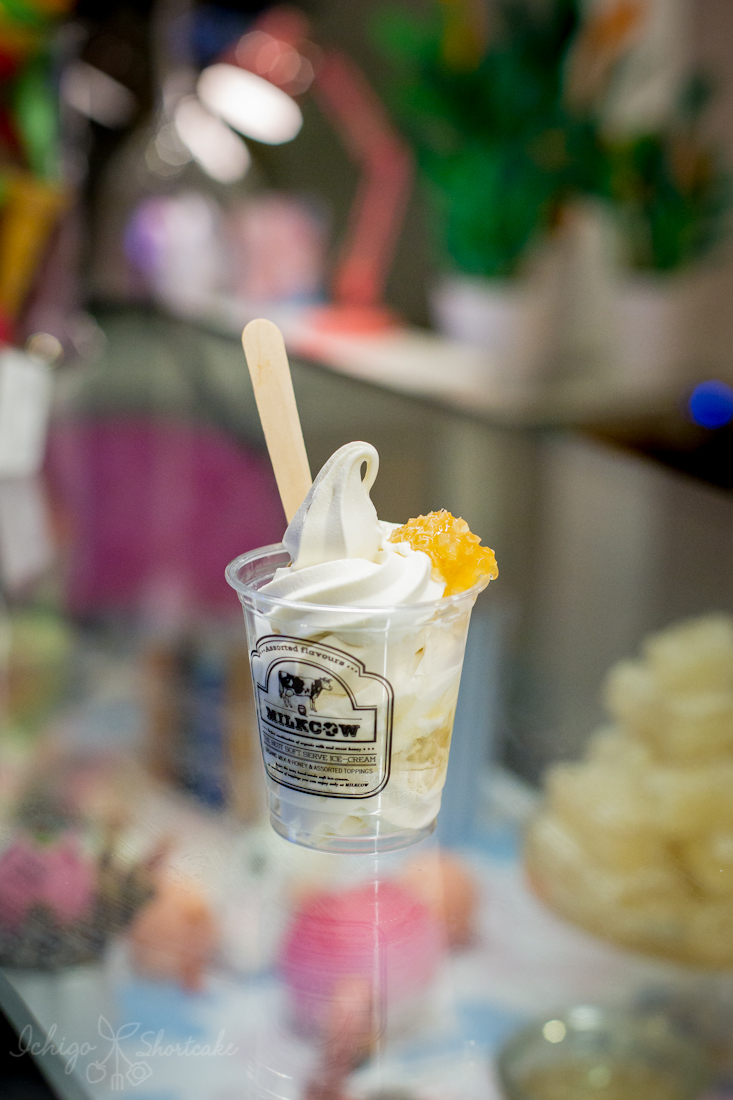 The second cup we tried was the Black Pearl. It consisted of cocoa dusted scorched almonds from Naked Truth, chocolate hazelnut syrup from Italy and a sprinkle of Fleur de Sel artisan sea salt from France. It didn’t look the most impressive compared to other cups but I loved the addition of the sea salt on top and the crunch the almonds added as well. 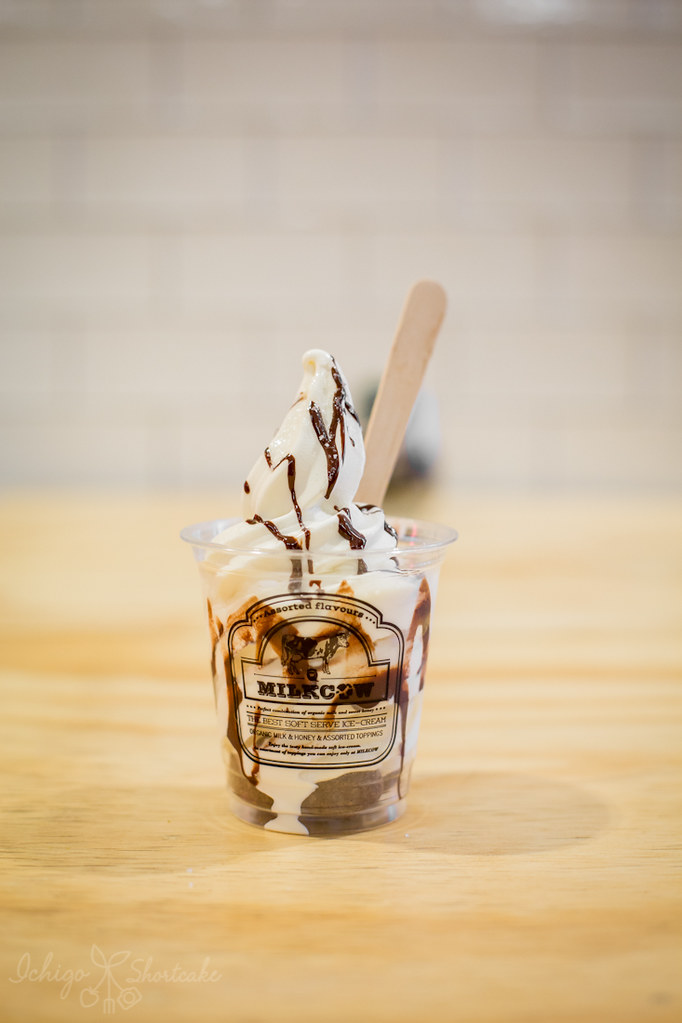 Now are the highlights of the show – the fairy floss! Who doesn’t like a bit of fairy floss? My inner child was screaming wildly as I watched the staff carefully shape my fairy floss into a fluffy cloud around the cup. This is the Mont Blanc – Oreo crumbs, chocolate rocks and Italian apple syrup with a fairy floss cloud. Truthfully, the look was better than the taste on this one. The apple sauce was a bit sweet for me (but I don’t have a sweet tooth to begin with) although I did love the fairy floss and the textures of this cup. 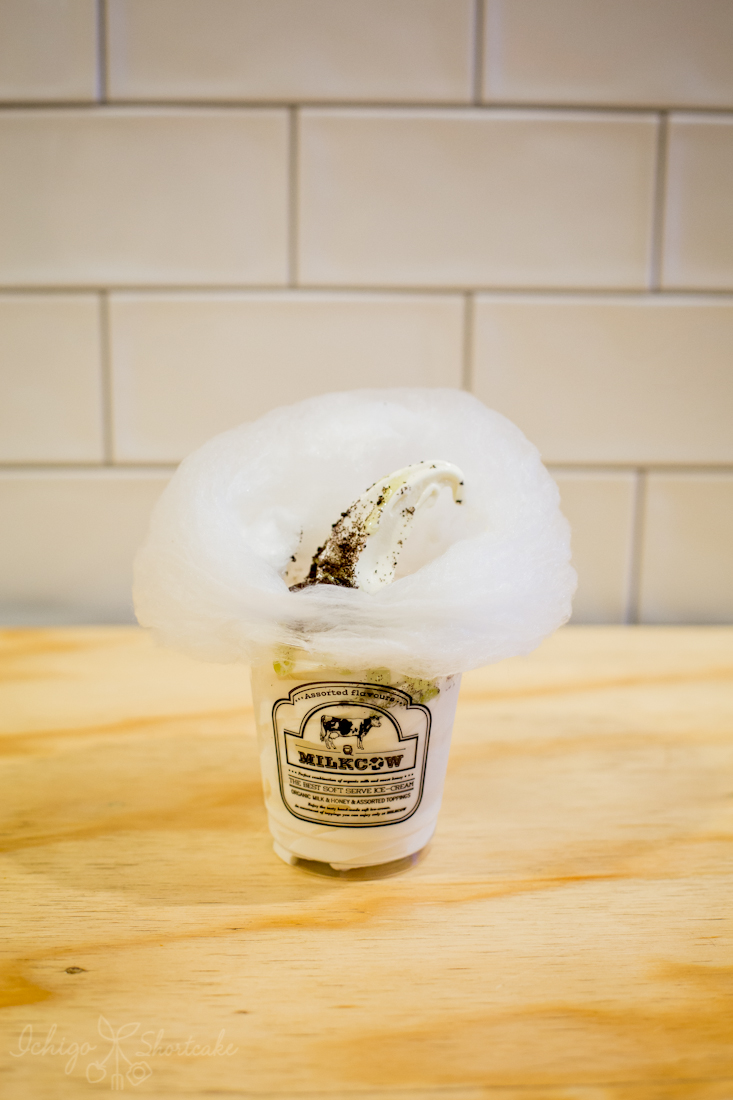 The Santorini was the prettiest of them all. With Oreo crumb, pistachio and hazelnuts, Italian tropical syrup and a fairy floss cloud looks exactly like Santorini. I could just imagine myself eating a cup of this sitting on a sandy beach with that dazzling white and blue in the background. The tropical sauce was fruity and sweet and reminded me of the blue heaven drink I used to have at the Pancake Parlour. Again it had a nice texture and the fairy floss cloud was a win. 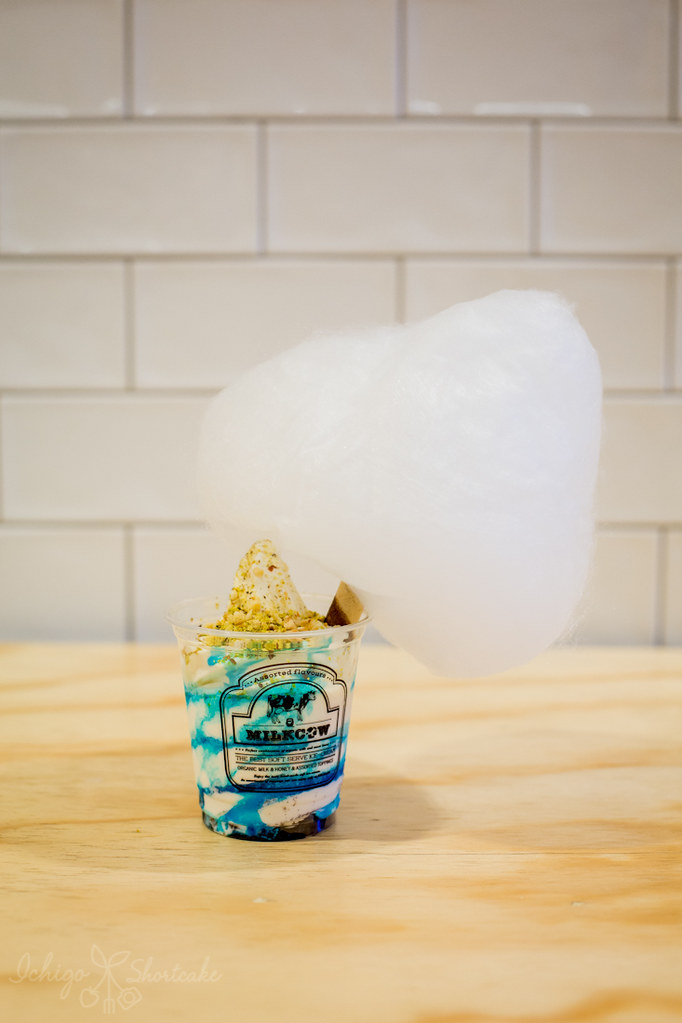 My favourite cup by far though was the Avalanche. It was dusted with espresso chocolates from Naked Truth, fairy floss and served with a big cup of espresso on the side from Sensory Lab. You can order the coffee hot or cold. We ordered a hot version because that’s what I’m used to, but pouring it onto the ice cream melted it quite quickly so I do suggest a cold cup if you don’t like melted ice cream. As we poured the coffee on though it was like magic before our eyes. The fluffy pile of fairy floss melted and disappeared. 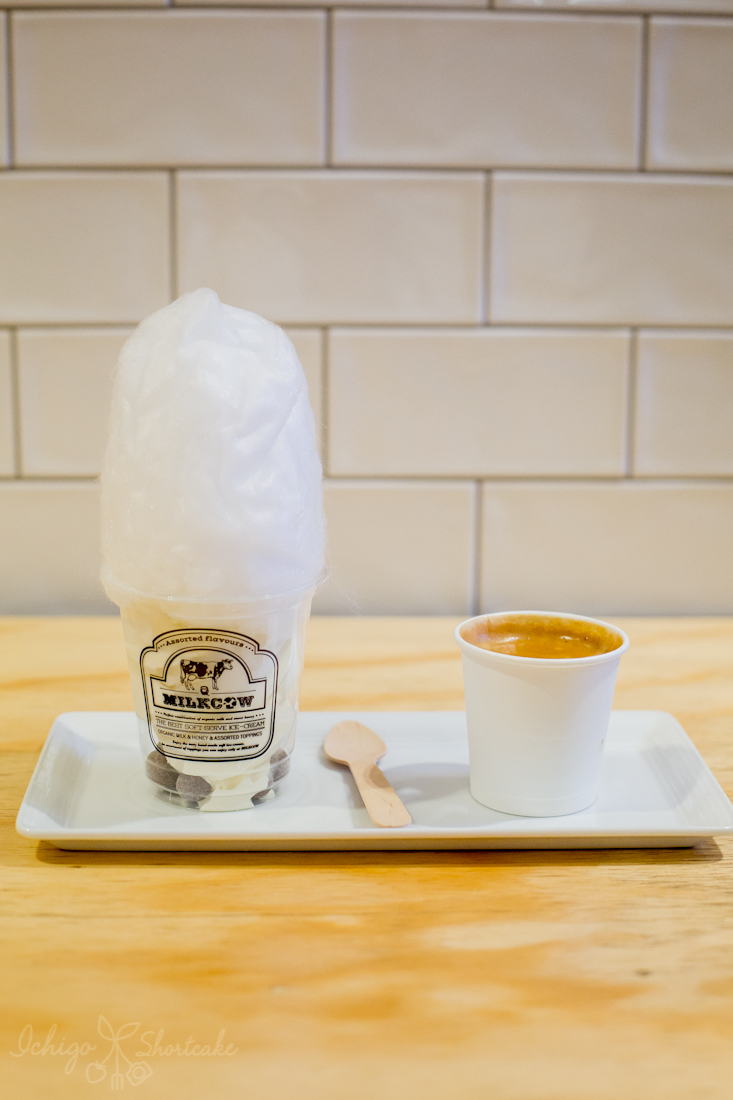 The coffee was delicious of course. This cup can be eaten 3 ways – at first it’s a coffee flavoured soft serve, as it melts it becomes an iced coffee and the left over espresso can be drunk as is! How perfect. If that’s not enough caffeine for you, eat it with some of the chocolate covered coffee beans. You can also of course eat the fairy floss separately. 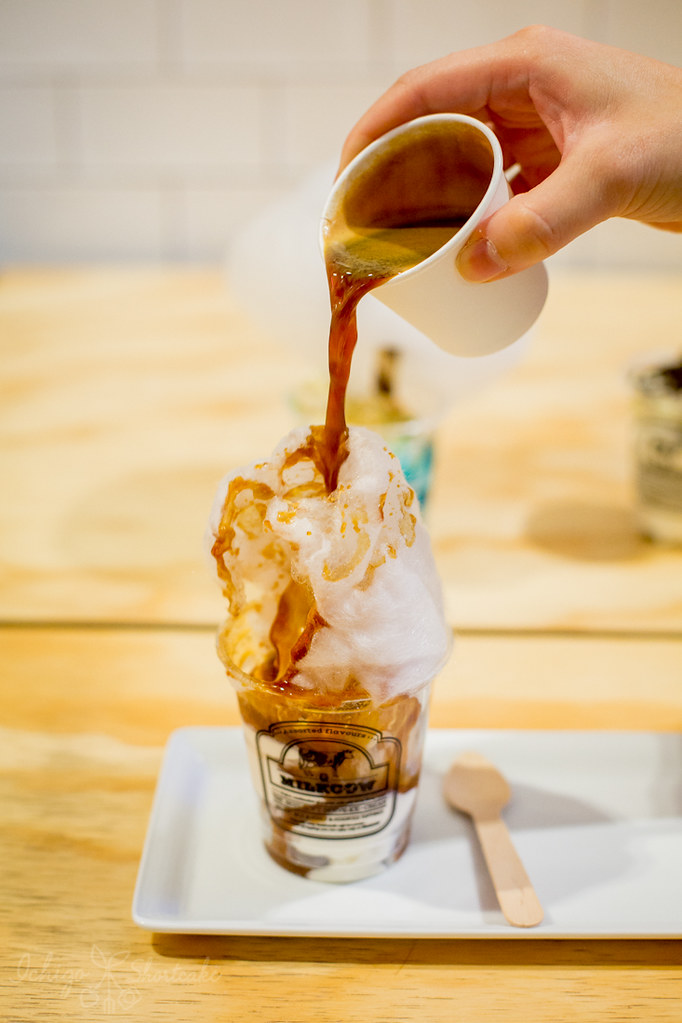 I can tell you I was on a sugar high that night and ate quite a few calories, but it was well worth it. I know it’s a bit on the expensive side compared to other ice cream shops but considering the quality of the ingredients, it’s not too bad.

The Milkcow popup in The Strand will be there until the end of May I believe, so be quick, you don’t want to miss out on this exciting little shop!